Inside the offices of digital production studio Deluxe

In an unassuming building tucked away on King West is one of the world's largest suppliers to the entertainment industry worldwide. Deluxe Toronto is over a hundred years old, started in New Jersey, and used to be owned by 20th Century Fox.

The company started out as a film production house and has since transitioned into a digital production studio. Today, they offer services ranging from production sets on streets to editing, mixing, and post-production and delivery as well as media services like handling broadcasting for TV stations around the world. 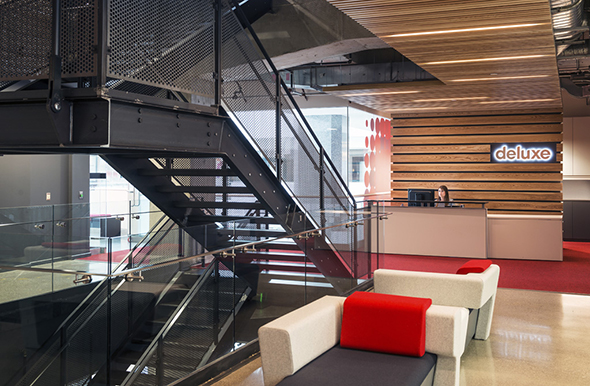 Formerly known as "Filmhouse," Deluxe is headquartered in Hollywood and has over 7,000 employees worldwide in offices from India and Australia to Italy and the UK. The old office was located on Adelaide Street East, but after a 25-year lease, the landlord decided to flatten the building down and convert it into a condo building. 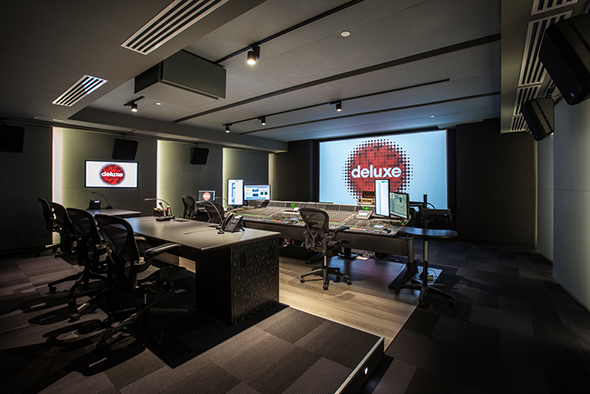 The studio's new home is spread across three floors in a concrete building near King and Strachan. The building, which the team found after an exhaustive search in a tough commercial real estate market, needed some serious work before the full time staff of 125 could move in and resume operations as normal.

For starters, in order to build the largest dedicated mixing theatre anywhere outside of Hollywood, the Deluxe team had to remove 190 tonnes of concrete by taking the roof off of the 8th floor so that it could be rebuilt to a taller ceiling height. 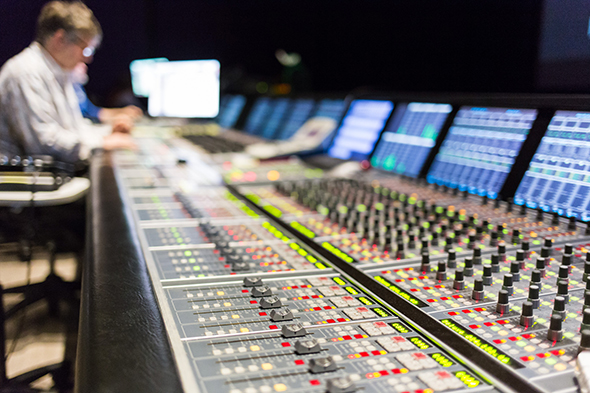 Fitted with a Dolby Atmos system, this mixing room has sound and mixing boards where theatre seats would be. Feature films like Pompeii can take up to 8 weeks of mixing room time, while shorter films can be completed in as little as 3 weeks.

The building, which isn't the brick and beam space so many company tend to be looking for, was a challenge to work with. With the help of the landlord and Quadrangle Architects, the team gutted out the entire space down to the concrete and built everything back up from scratch. 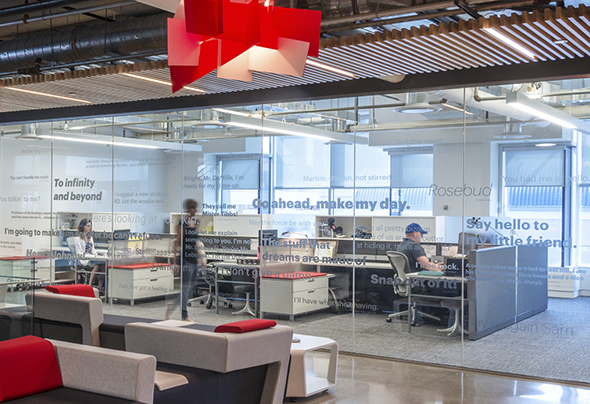 While most Deluxe studios around the world specialize in an area of film production, the Toronto office is more of a microcosm in that it does everything from support for feature films like Adam Sandler's upcoming movie Pixels, which was shot in Toronto, to being on the ground for productions happening on the streets of the city.

While most of their clients are bigger feature films or studios like Disney, Deluxe likes to help produce and work in collaboration with emerging and local artists like Ingrid Veninger. 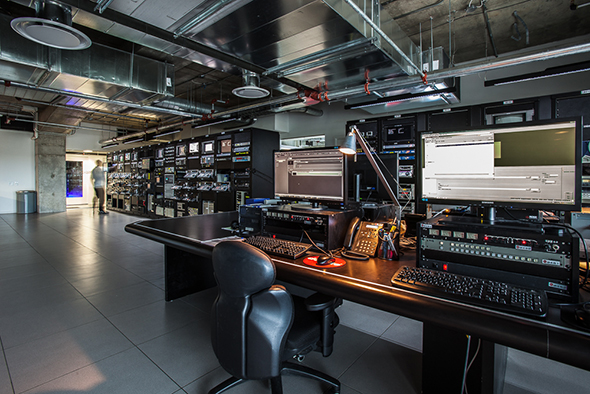 The Toronto studio of the company has seen the likes of Dustin Hoffman, Bruce Willis, Robin Williams, and Liam Neeson come through to re-record lines and do post-production work for their films.

In addition to mixing theatres and editing rooms, Deluxe has a number of ADR studios, which are like giant Skype rooms except that the video and audio quality is top-notch and the connection never cuts off. 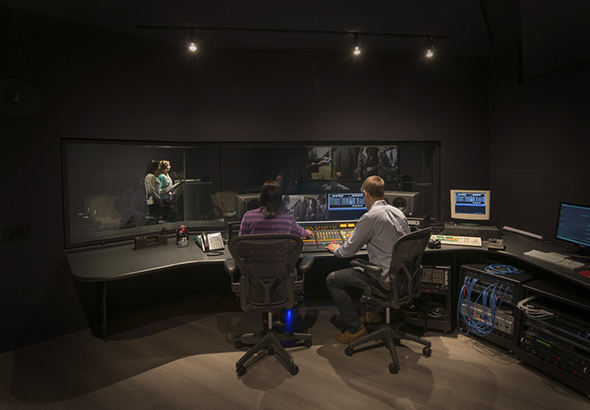 Often times, talent needs to re-record their lines because of poor quality at the time of filming. If the talent in question is in a different geographical area than their director, they can use one of the ADR studios at a Deluxe location anywhere in the world to come in, link up, and record their lines. 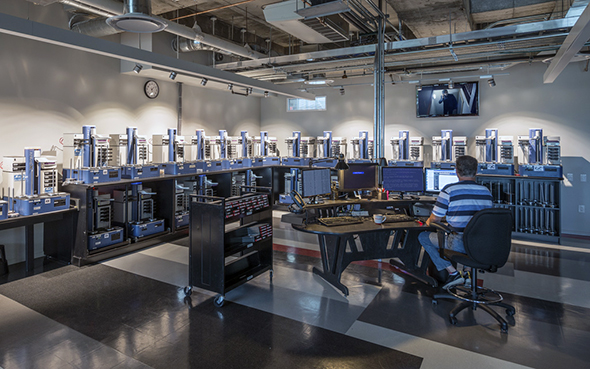 Deluxe has worked on production and processing of movies like Scott Pilgrim, Pompeii, and the Saw series. In order to send these files off to the theatres, the staff loads them up on a specialized hard drive that is locked to the serial number and room of the theatre the movie is set to play in. The movie doesn't play if the hard drive is used with any other projector and in any other room.

Given that they work with sensitive, never-before-seen footage of movies and TV shows, the security measures in the Deluxe office are strict. Visitors are always required to check in with a staff member and should never be seen without their badge. There are also security cameras everywhere as well as certain parts where photography is completely forbidden. 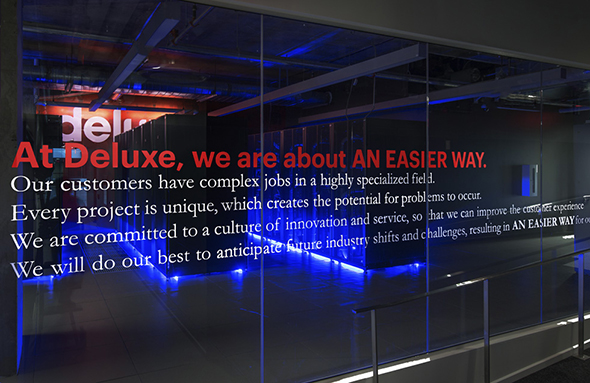 The glass walls and doors of the office are decorated with famous movie lines and timestamp decals that note the release or production of a movie the studio has produced. 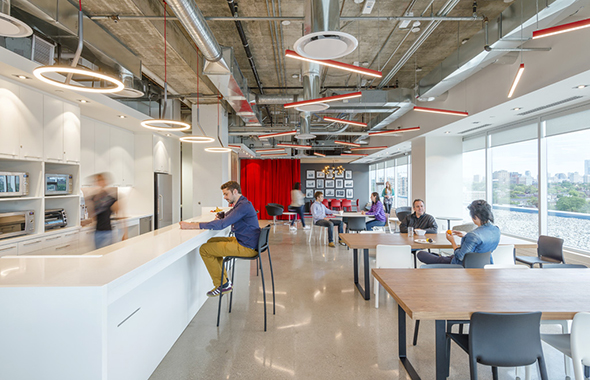 Being the main brand colour of Deluxe, red is featured quite prominently throughout the space, whether it's in the form of a coloured wall in a white room, a piece of furniture, or a telephone headset. Some parts of the studio are also dedicated to smaller rooms for phone calls, as well as large chunks of open space for finance and management staff. 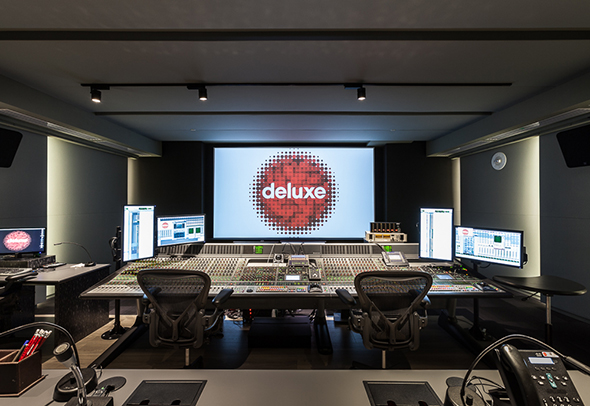 One of the most recent projects the Deluxe team is working on is Guillermo del Toro's Crimson Peak, which is set to be released in October. You can find out more about the company and some of their projects on their website.