When a long-running TV series is cancelled, it's the end of a world carefully constructed by art directors and set designers and put together by wardrobe supervisors, prop buyers and production assistants. You can see the collected remnants of one of those worlds this weekend in a pair of soundstages on Eastern Avenue, at a liquidation sale conducted by Maynard's, the auctioneers, where the costumes, props, furniture and set dressing from a recently-cancelled US show are being cleared out at startlingly low prices. 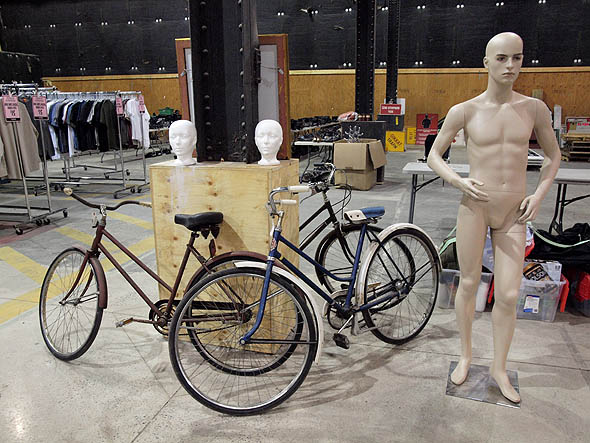 Alex, the production manager of the show, swears me to secrecy about the producer and name of the series, but tells me that it ran for four seasons and wrapped for production earlier this month. Unlike shows that clear out surplus props and costumes, they had decided to keep everything to re-use if possible every season, storing it all in fourteen tractor trailers. 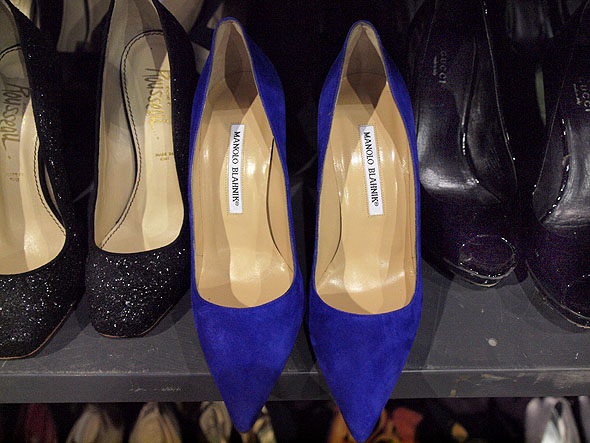 The most desirable merchandise is cordoned off in a corner of one of the adjoining soundstages - the designer label clothes worn by the major characters in the show. Shelves of women's shoes and tables of boots take up one wall, priced from twenty-five to a hundred bucks. There are shoes by Prada, Jimmy Choo, Tom Ford, Michael Kors and Manolo Blahnik, occasionally in duplicates if a character needed them for action scenes that might damage the merchandise. 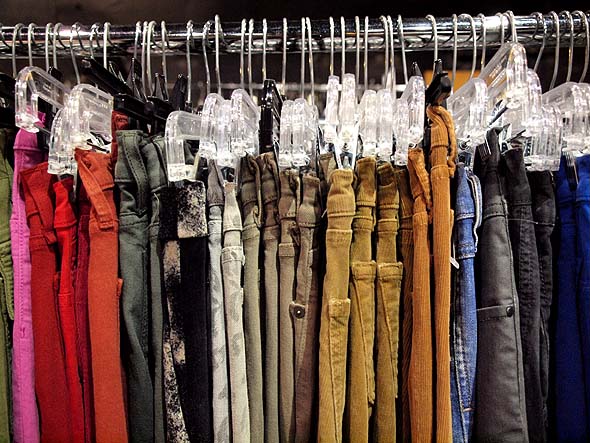 The adjacent racks of men's and women's clothes are also full of multiple sets of the same item, priced at a fraction of their original cost and, as far as I can see, barely worn; some items still had price tags attached. Designer labels proliferate here as well: Dolce & Gabbana, Guess, Canali, Boss, Burberry, Armani and Strellson. I find a spotless and very nice seersucker suit from Brooks Brothers, but it's not in my size.

Size might be an issue for anyone hoping to attend the Maynard's sale during its three-day run staring today (Sunday,) since - as anyone who's worked in the film industry can tell you - most actors tend to be small and slight (especially women.) You might also think twice about the rack of underwear - most of it lacy and revealing - for sale, but the prices are likely to overcome concerns of hygiene, not to mention the unspoken but undeniable celebrity factor that comes into play with set sales like this. 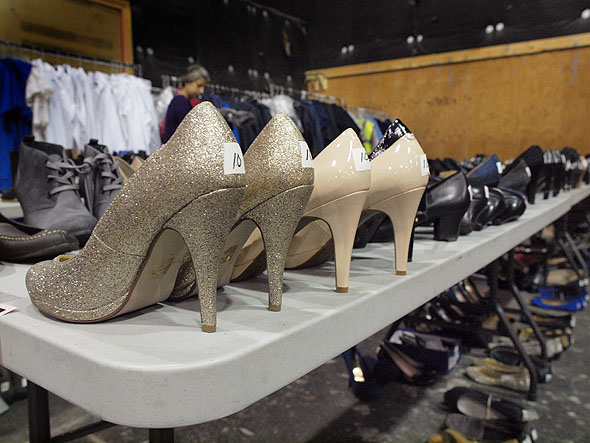 Alex tells me that shows with contemporary settings can be much more expensive to run, as fashion has to be up to the minute - sometimes painfully so, as with this series - and costume departments can't rely on rental houses to kit out much of the cast. He also describes the upward creep that costume budgets can take when big stars are in the cast, some of whom will exercise their clout to get their characters dressed in designer labels that would probably be far from the style or budget of their character in real life, though they fit the star's tastes. 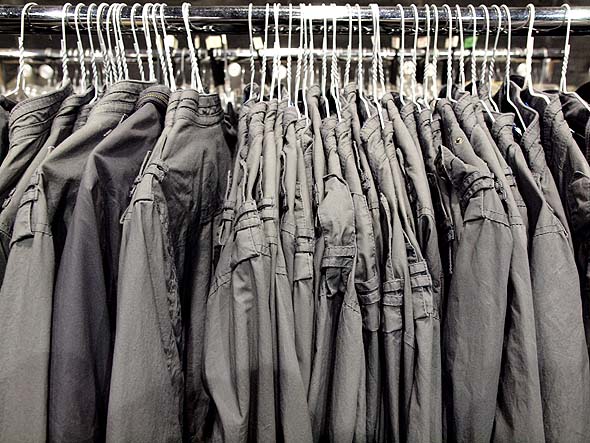 Outside the exclusive precinct of star wardrobe, there's a much larger section of clothing worn by secondary characters and extras, much of it in a distinctly business or paramilitary style. One table is full of glittery high heel shoes that look like they might be from a scene set at some eurotrash party, while other nearby tables are filled with combat boots and hundreds of scuffed black men's shoes. A pair of Florsheim oxfords are marked with dots of some glossy, dried fluid. Stage blood? Who knows - all sales are final. 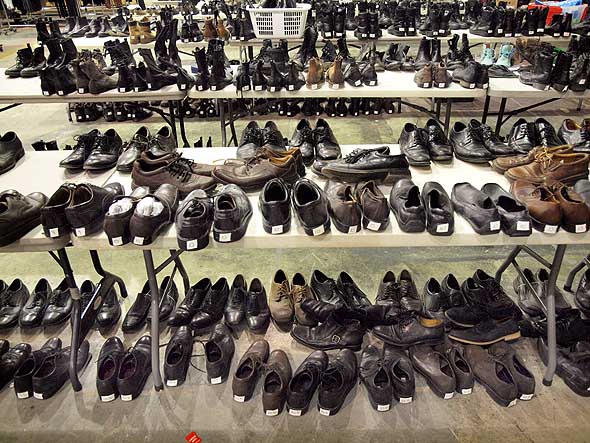 There are racks of black cargo pants, uniform shirts with epaulettes and countless grey windbreakers covered in utilitarian pockets and flaps. This is the world of minion wear - clothing for the ranks of expendable heavies who patrol mountain lairs and spend their days eating craft service while waiting for their chance to shout their one line and their character's likely last words: "Halt!" perhaps, or "Intruder!" 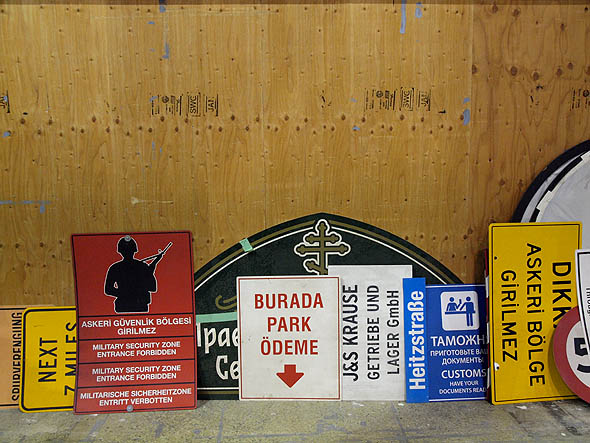 By one wall there's a stack of signs from scenes where Toronto has stood in for more exotic locations, while other walls are stacked with artwork from dozens of sets, once carefully dressed then quickly torn down and stored away. Most of the frames contain undistinguished paintings and graphics, but occasionally something stands out, like the massive satellite map of the globe, barely concealed behind a 13-star "Betsy Ross" American flag, faded and full of bullet holes. 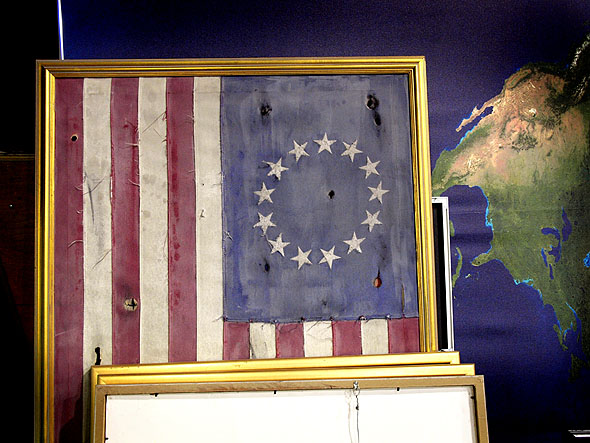 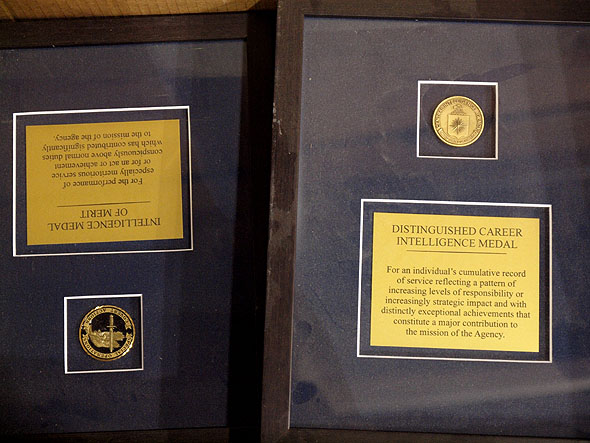 It's hard not to be impressed by all the accumulated effort that's gone into the show, by hundreds of professionals who, as Alex explains to me, often had to pull together sets and costumes with a week's notice and generous budgets - up to $20,000 a week spent on wardrobe, out of the two to four million dollars budgeted for each of the show's episodes. 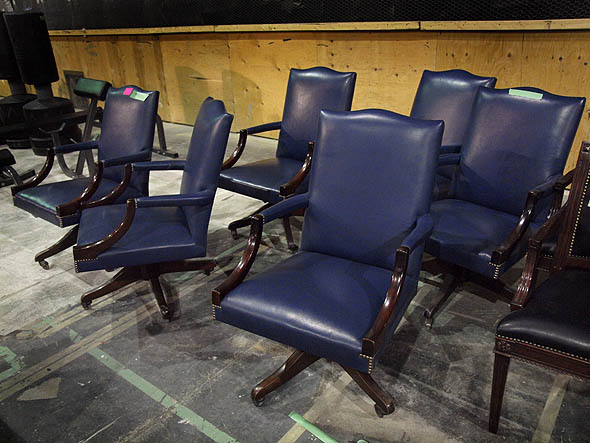 The second soundstage contains the furniture that had to be purchased for the sets. Rental of props, furniture and wardrobe is obviously a big part of production budgets, but with short deadlines and specific needs, rental houses often can't fill their wish lists, so crew frantically comb furniture stores, antique shops and liquidation sales like this one to fill their penthouse apartments, corporate boardrooms and torture chambers. 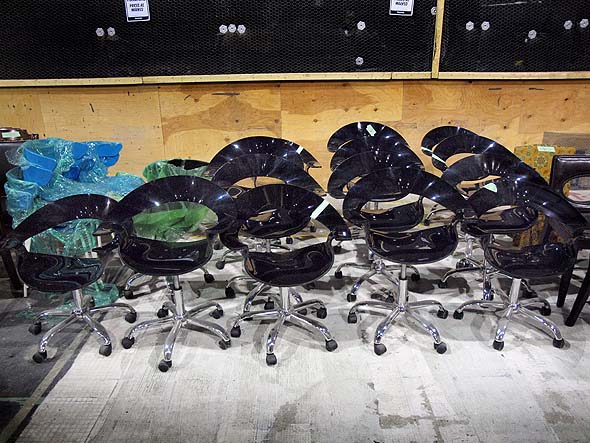 There's a set of fine blue leather wing chairs on rollers, and another set of futuristic Lucite chairs that would look at home in the lair of any plutocrat villain's dreams. On the opposite side of the room is a set of bed frames, ranging from an expensive-looking metal four poster to stainless steel prison cots and a metal bed frame that would be just the thing to handcuff a wriggling captive to, in some damp cellar somewhere. 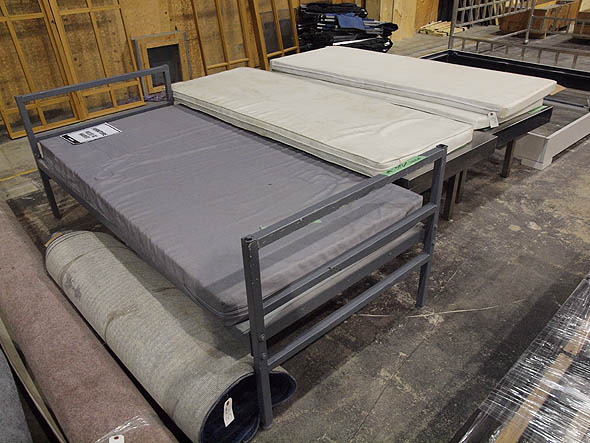 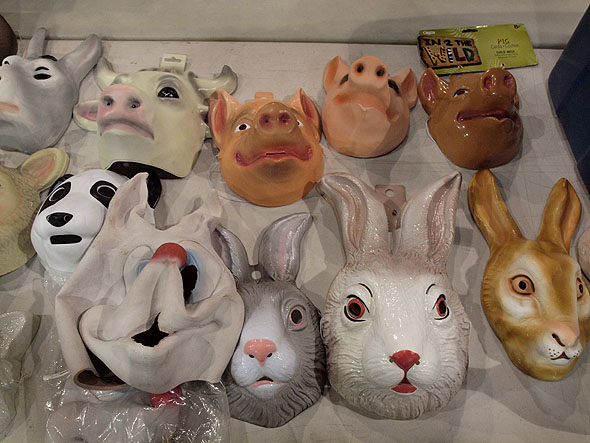 There is luggage and motorcycle helmets, sets of towels and coffee makers; a table covered in animal masks and a startling selection of children's toys. There are boxes full of stone and clay tiles, piles of fluorescent lighting, a table full of flat panel monitors and another of wall mounts for TVs. There are phones, of course, and lights - tables and tables of lights of every description; it would seem that a great deal of the energy put into any movie or TV show is sourcing precisely the right table, desk, anglepoise or floor lamp for every situation. 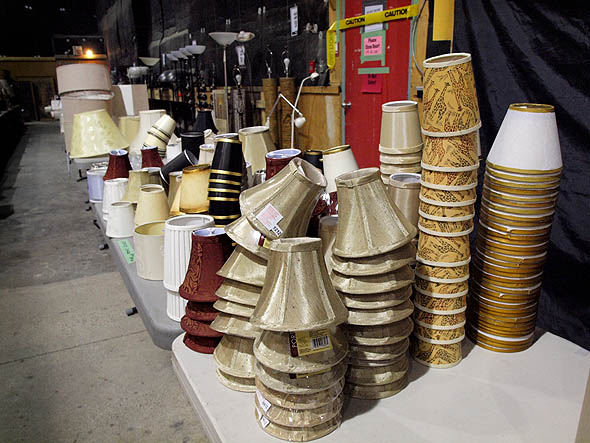 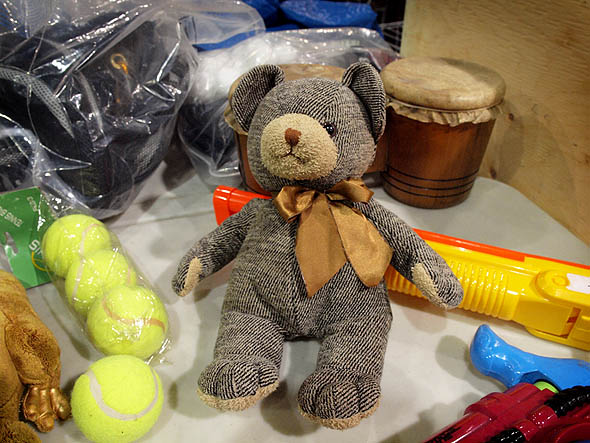 Depending on where you're standing, the Maynard's sale seems like a designer close-out, or a big garage sale, or the final days of some boutique hotel. Then there are the unique items, like the freestanding martial arts punching bags, one with a burly rubber head and shoulders mounted on top, two neat bullet holes in the forehead. 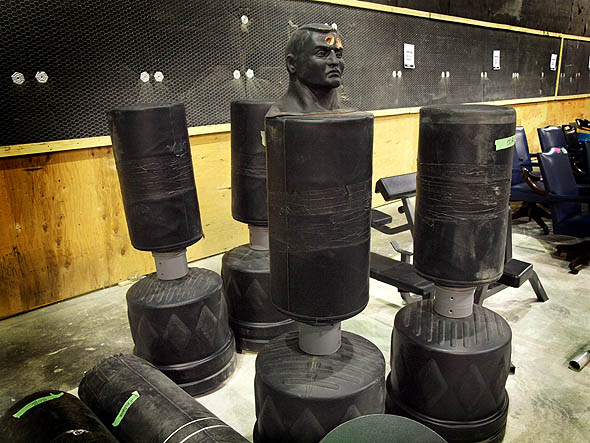 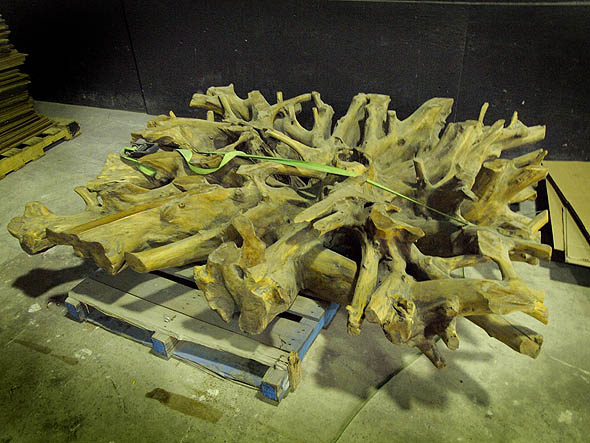 In a corner of a third soundstage where crew members have stored items they bought before the sale, Alex shows me a huge piece of driftwood. "That cost $16,000, but we bought it for $8,000. I don't know how we're going to move it." It was the centrepiece of a villain's pad, framed and mounted in a wall, and while it could have been knocked together by set construction crews for a lot less, time was of the essence and it became a line item on that episode's budget. It's a one-of-a-kind piece, suitable as a (vast) coffee table, and Alex is still scouting around for a suitable buyer. 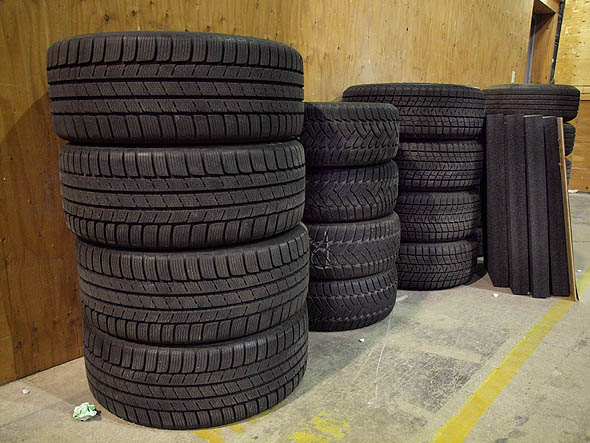 Then there are the tires. Stars of the show were given snow tires for their cars, which now sit stacked by a wall in the furniture room. They're for sale now, most of them apparently unused; a perk, and a cost, of shooting in Toronto.