Based on the best-selling novel by David Mitchell. Crazy long and plain crazy, this sprawling Sci-Fi opus from the same Hollywood brains who birthed big screen yin and yang like Speed Racer and The Matrix is certainly not without its devotees who reckon one day we'll all look back on it with the same kind of affection usually associated with the works of Stanley Kubrick, Alain Resnais or Andrey Tarkovsky. And then there are those who think it's a pile of insipid navel gazing horse poop that cruelly wastes our precious time with sound and fury signifying nothing. Described in its own words as "Six stories spanning centuries. One soul", this is the visual equivalent of a new-age relaxation CD you might put on while in the bath thinking about the meaning of life you had last night and sipping on a glass of red wine.

Extras include self-important titled featurettes such as "A Film Like No Other", "Everything is Connected", "Spaceships, Slaves and Sextets", and "The Bold Science Fiction of Cloud Atlas", and for the super brave: "Eternal Recurrence: Love, Life and Longing in Cloud Atlas" - Romance and fate over the ages, as interpreted by the cast and crew through the various stories.

While it's not hitting Bluray and DVD for another 2 weeks, this 5th installment of the seemingly endless adventures of Bruce Willis' Teflon John McClane character is today hitting the brand spanking new Digital HD delivery system from 20th Century Fox, and will be available through Amazon.com and most other "Instant Video" outlets for those who just can't wait. While containing approximately zero the charm of the original (which is now over a quarter century old!) Die Hard, this routine action set-piece mix-tape is a breezy enough time waster, although that's probably two too many trips to the well for this once rich franchise.

A 4k scan of a film negative produces an image so crisp and clear that it is the closest you will ever come to seeing a brand new 35mm film print. While every turn of the digital revolution has promised "definitive" versions, this is about as close as a true cineaste would dance near the fire. And while it seems gimmicky on some other titles (does the world really need The Karate Kid in 4k?). Martin Scorcese's undisputed masterpiece deserves nothing less than the royal treatment, and while the grime evident in earlier releases added to the sleazy 1970s New York vibe, the clarity in picture and sound (especially Bernard Herrmann's haunting jazzcore score) is nothing short of revelatory. If you are fan of this title, or better yet, have never seen it, do you yourself a favour and check out this stunning restoration.

The original 1957 3:10 to Yuma is a brooding Western noir, with ample ambiguity and the threat of violence at every turn. Featuring a gorgeous 4K restoration and a brilliant and detailed interview with writer Elmore Leonard.

Blu ray re-release of the pilot episode of the original Battlestar Galactica, glossy Space opera shot through with camp and 70s glam, and looking utterly remarkably bonkers in HD. Forget the gritty pretentious 2000s era reboot (if you can) and kick back with this, some popcorn and a cold drink. 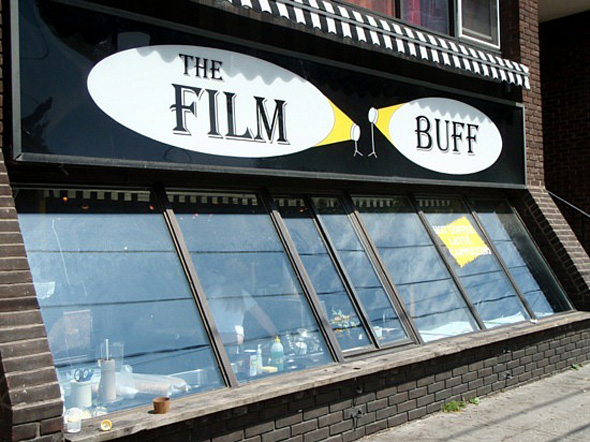 The Film Buff are purveyors of fine film, and ice cream. Amanda Worsley of @filmbufftoronto also knows what makes a good documentary, and here are her suggestions on some gripping true crime docs:

Whether its tales of injustice or portraits of boogeymen, true crime docs seem to fascinate everyone. When done well, this genre can incite more visceral reactions than any fiction. They are heart-wrenching, frustrating and scary. These are a few of our favourites. Honourable mentions include; Murder on a Sunday, Brother`s Keeper, At the Death House Door and Taxi to the Dark Side.

A French television miniseries from Academy Award-winning documentarian, Jean-Xavier de Lestrade. The series documents the riveting investigation and trial of Michael Peterson, accused of brutally murdering his wife in their home. Most remarkable for the access the filmmakers had to the Petersen family and his defense team. For those who like twists and turns, this is the cream of the crop.

Another classic of the genre. The Paradise Lost series includes 3 films (Paradise Lost, Paradise Lost 2: Revelations and Paradise Lost 3: Purgatory) chronicling the harrowing experiences of the now famous 'West Memphis Three'. The Arkansas teenagers were accused of the murder and sexual mutilation of three young boys - a crime whose brutality left the community blood thirsty for vengeance. A distressing series and not for the feint of heart.

Famed documentarian Errol Morris presents the story of Randall Dale Adams sentenced to life in prison for the 1976 murder of a Dallas police officer. Arguably the Citizen Kane of the true crime doc genre. Morris challenges the case against Adams through a series of re-enactments and penetrating interviews. A doc that literally changed lives and shows the power and potential of the genre.

A haunting look at a family and community torn apart by allegations of mass molestation. Like The Staircase we are provided with a remarkable level of access to the accused's family, this time through their own home movies. We bear witness to not only the happy-go-lucky days of the past, but the meltdown that takes place in the Friedman home as they face these atrocious allegations. The chronicle of a family but also an unflinching look at mass hysteria, and the nature of pedophila. Not to be missed.

A true labour of love and heartbreak. In 2001 Andrew Bagby was killed and soon after his ex-girlfriend (and accused killer) Shirley Turner fled to Newfoundland and announced she was pregnant. In Dear Zachary Andrew's best friend, filmmaker Kurt Kuenne, seeks to paint a picture of him for his new son, Zachary, while chronicling the ongoing case. A damning indictment of the Canadian justice system and a remarkable portrait of the unflinching strength of Andrew's parents.

Another devastating doc about a travesty of justice and the inability to make amends to those affected. The film, a critical investigation of the famed 1989 Central Park Jogger case, is a change of pace from the usual Ken Burns fare with a decidedly bleak view of the American justice system and media. No silver lining here. See our blog post for a recent full review (http://thefilmbuff.com/the-central-park-five-2012).

One of the rare examples of the genre that offers hope and inspiration. The Interrupters are a Chicago based community group (many of whom are ex-convicts) using a new model to address the epidemic violence in their city. Seeking to stop violence at the point of transmission they put their safety on the line to change the pattern of brutality on their streets. A remarkable group of people (Ameena alone deserves her own doc) doing remarkable work.

An astonishing chronicle of obsessive love. They`re certainly no Romeo and Juliette but a remarkable 50+ year romance nonetheless. When Burt can`t have Linda he has her blinded by lye. But even that won`t permanently sideline their attachment. One of those truly stranger-than-fiction tales.

A collection of three HBO interviews with prolific mafia hit-man, Richard Kuklinski. An imposing figure in stature and manner, Kuklinski is not your ordinary serial killer. He is not motivated by sexual depravity, hate or any external circumstances. He is simply a self described `killing machine`. Most chilling is his icy demeanor and absolute lack of emotion as he recounts his violent childhood, life with his unsuspecting family and the grisly details of his 100+ murders.

A fantastic new addition to the true crime doc canon. The Imposter recounts the tale of 10 year old Texas boy Nicholas Barclay who disappears in 1994 before turning up again in Spain in 1997. But he`s... different. This is one of those films that absolutely benefits from knowing as little as possible. Avoid all articles, reviews etc. and just go straight to the film.