The first true guilty pleasure of 2013 arrives in the form of Gangster Squad, a morally dubious but slick period piece which mimics The Untouchables for the GI Joe generation while soaking it like the spray from a Thompson M1928. An A-list cast with heavy hitters like Ryan Gosling, Emma Stone, Josh Brolin, Nick Nolte (so grizzled you could fry a steak on his forehead) and Robert Patrick (aka the T-1000) round out the package, with enough cringe inducing dialogue and goofy accents - Gosling seems to have been hitting the nitrus - to make this a future classic for bad movie night. Never mind the bonkers turn from Sean Penn, who seems to have wandered in wearing a Dick Tracy villain's deflated latex mask from about two decades ago. By the time the Wile E Coyote-esq cartoon finale climaxes, you'd be forgiven in thinking this was a comedy in a thrifty Boardwalk Empire disguise.

Special features include a commentary from director Ruben Fleischer (Zombieland), a "Rogue Gallery" and deleted scenes, which bizarrely do not include the exorcized scene in which a gangster shoots up patrons in a movie theatre. You might recall this scene played in the trailers that ran around the time of the Aurora Batman gun massacre, and after a quick snip it's been banished to the black hole of PC Hollywood Neverland, along with also that Spider-Man trailer featuring the Twin Towers, and Song of the South.

A petty robbery spirals into a tense hostage situation after three gunmen hold up a diner that's a front for the mob. Nice little gritty crime film which evokes the low budget strait-to-video potboilers of the 1990s, with Michael Chiklis, Forest Whitaker, Ray Liotta and Common .

Based on events which unfolded in Thailand during the December 2004 Tsunami , The Impossible follows a family literally and figuratively torn apart by its fury. Ewan McGregor and Naomi Watts play the devastated parents whose family are the focal point of a much larger natural disaster.

PBS documentary from Ken Burns chronicling the race relations powder keg that existed in New York in the late 1980s. After the horrific rape of a Central Park jogger, 5 young teens are dragged through the courts as the city bays for blood and the media fine tunes their exploitative narrative. This is a powerful indictment of many too many societal ills that collided at the same time, and sadly paints a picture of a justice system which remains broken, while New York City circa 1989 resembles an alien planet.

Sticking with hellish visions of New York, Mark Wahlberg, Russell Crowe and Catherine Zeta Jones headline this political thriller about the Mayor of Gotham steeped in sleaze and corruption. Crowe delivers yet another performance of burning intensity, matched by the icy princess Jones and vigilante cop Wahlberg, recalling his sterling turn in The Departed.

Norwegian horror so ice cold it'll have you breaking out a winter coat in the opening scene. A demented Mountain man who terrorized heroine Jannicke in Cold Prey is brought to the local hospital where she is being treated, prolonging her nightmare. Clever slasher evokes the 1980s/90s cycles but still manages to raise new, ahem, chills. Followed by a Cold Prey III, natch. 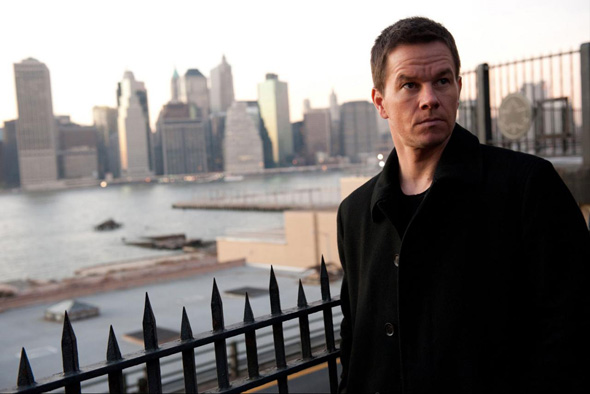 The kind folks at eOne have given us two copies of both The Impossible and Broken City to give away.

To enter, simply add a comment to this post with a reason why you would like to see either film (feel free to be creative, as we're not looking for one answer). Please leave a valid email address in the comments field so that we can contact the winners.

Fine print: You must be a Toronto-area resident to win. Only one comment and answer per person. If you include multiple answers or post multiple comments you will be disqualified.

ASTRON-6 describe themselves as "Five filmmakers who assemble like Voltron to create such epic feature films as FATHER'S DAY and MANBORG, and epic short films as COOL GUYS, and HEART OF KARL."

To mark the exciting DVD release of MANBORG (out now) I asked Director Steven Kostanski a few pressing questions:

What are your favourite theatres or video stores in Toronto?

I enjoy going to the Carleton Theatre to catch movies since it's down the street from my place and is cheap and usually not packed. I also like to scour BMV and Suspect Video on a regular basis.

MANBORG plays like a valentine to the VHS culture of 80s and 90s, where many titles by-passed theatrical release and went straight to video. What was some of the stuff you gravitated towards in that era, and what effect did it have on you?

When I was a kid I loved iconic stuff like Terminator and Robocop, so I'd gravitate towards anything remotely similar. I'd rent all the low-budget knockoffs, stuff like Eliminators, Nemesis, Cyborg, etc. So, pretty much anything by The Cannon Group, or Empire Pictures. They'd always have the most enticing covers.

People really remember the lurid VHS art which used to adorn less-than-great titles. Often the cover art was the best part of the movie, and many people have vivid memories of even being afraid of certain titles because of the cover. Did you have any experiences like that?

I think Eliminators is the best example from my childhood of a movie that didn't live up to its cover. The poster features all the main characters posing in front of an explosion, dramatically firing their weapons. The main character is a wicked looking cyborg with tank treads instead of legs. How could any kid say no to that?

Both FATHER'S DAY and MANBORG have been lumped in with Tarantino and his ilk's "Grindhouse redux" genre, but it strikes me that Astron-6 is more VHS/Beta than 16mm. Do you make a distinction? Were your formative years more influenced by movie theatres or video rental stores?

All the members of Astron-6 are influenced by the video store days more than anything. None of us were really around for the grindhouse cinema days. Our tastes are very much rooted in bargain bin VHS flicks from the 80s and 90s.

Trash VHS culture seems to be really popular these days, with docs like REWIND THIS!, and a renewed fascination with vintage video labels like Wizard, Cannon and Vestron. Why do you think that is?

I think that with movies becoming so easily accessible nowadays a lot of the charm has been taken away from the experience. Before internet and downloading and all that, you had to go out on epic quests to track down obscure genre titles.

I remember it took me forever to get my hands on the original Texas Chainsaw Massacre. Blockbuster had the box, but whoever rented it never brought it back. I'd go in week after week hoping it would come back, but it never did. I eventually tracked it down, and when I had my hands on the beat up cardboard case it was like I'd struck gold. That whole part of the experience has been taken away. Now you just click a button and there's the movie you're looking for. With VHS, you get a cool cover, a fun write-up and beat up tape, which for all you know, might not even work. That's half the magic of movies.

Any big budget studio pictures you are excited about for 2013?

I'm excited for Man of Steel, Iron Man 3 and Star Trek. But the one I'm most excited about is Pacific Rim. I love giant monsters fighting robots, so that looks right up my alley.

The Astron-6 INSTAGRAM feed is one of the best out there. How do you find such incredible and unique imagery on a regular basis?

That's all Jeremy Gillespie's doing. He runs the Astron Instagram and I think he spends a good chunk of his day digging up weird pictures to post on there.

The BIO-COP trailer really brings the house down. But do you think you could keep the momentum going for a feature, or does it work best as a faux trailer?

I think for a Bio-Cop movie it needs to go in a completely different direction. The trailer is it's own thing. It should be in the same vein as Big Trouble in Little China, where Bio-Cop is the bumbling Kurt Russell sidekick, and a more competent hero is the main focus. I also thing a feature should play it a lot straighter than the trailer. The short can get away with being very broad and goofy, but a full length version needs some kind of legitimacy to it.

If you could make a feature length BIO-COP, which city would it be set in? Better yet, which Canadian city deserves a BIO-COP?

I've always wanted to set a movie in a semi-futuristic Winnipeg, though I've developed a soft spot for Toronto's Chinatown since moving out here.

Please give us the titles of 5 movies, any year or genre, that you think are totally underappreciated which deserve more love. No explanation required.

Halloween III: Season of the Witch

ASTRON-6, Thank You and Good Luck!