This Week in Home Video: Killing Them Softly, Lincoln and Apocalyptic Toronto


Poor Andrew Dominik can't seem to catch a break. After his searing debut crime film Chopper, the very talented New Zealand director now has two moody, slow burning Hollywood classics to his credit which have both been virtually ignored upon their theatrical release (both also starring the usually reliable box office honey trap Brad Pitt, natch). Killing Them Softly, based on the book "Cogan's Trade" by George V Higgins, is a too clever by half indictment of the United States economy, told Kabuki theatre style using early Tarantino tough guy memes and featuring veterans of chewed over Gangster classics such as GoodFellas and The Sopranos.

That is to say, fans of the genre will find much to love here, while those looking for something with more depth may be surprised at the complex storytelling going on beneath the surface. With Brad Pitt, James Gandolfini, Ray Liotta, Richard Jenkins and Scoot McNairy and lots of sound bites from Barack Obama circa 2008.
Extras include deleted scenes and a making of featurette.

Long, pensive, and gripping, and that's just the beard on Daniel Day Lewis' mighty chin.
Steven Spielberg's noble historical epic joins his growing pantheon of US history curriculum on film, but doesn't quite deliver the same emotional wallop of Schindler's List or even The Colour Purple (although it's a step up from War Horse). Lewis does indeed effortlessly convey the vex Lincoln surely must have endured getting anything done, and a Robert Altman like company of supporting roles filled out by the likes of Tommy Lee Jones, James Spader, Sally Field, Joseph Gordon Levitt, Hal Holbrook and Bruce McGill bring their top game. Bonus features include Spielberg and the gang discussing the challenges of bringing Abe's story to the big screen, as well as a portrait of Richmond, Virginia and why the crew chose to shoot there.

To The Artic (Warner Bros.)

Gorgeous IMAX photography makes this well intentioned documentary about the plight of the Polar Bears easy on the eyes, while the subject matter may be more difficult for certain quarters to digest (if you are a Global Warming denier you probably won't enjoy this). The golden, Grandmotherly voice of Meryl Streep is on narration duties, subbing in for the usual Morgan Freeman and doing a great job. Some fantastic extra featurettes include "A Polar Bear Family", "The Challenge of Filming in the Artic", "Life Under Water", and "Welcome to the Artic".

From Beyond (Scream Factory)

Based on H.P Lovecraft's story of the same name, and probably the closest to bringing his unique vision to life in the pictures we'll ever see (until Guillermo del Toro unleashes At the Mountains of Madness at least), this is truly gonzo stuff. Crammed with surrealist imagery and blood splattered mayhem, Scream Factory have once again managed to treat a poorly serviced VHS-era horror movie right. Extras include audio commentary from director Stuart Gordon, storyboard-to-film comparison, and "shocking" never before seen footage.

Another classic horror film lost at sea now rescue by Scream Factory, this is the second installment in Don Coscarelli's nightmarish series about The Tall Man and his lethal flying silver balls. More action-oriented than the orginal, but still infused with frightful imagery and definitely worthy of horror fans attention. Bucket loads of extras, including a well-timed rare short film starring Rory Guy (aka Angus Scrimm aka The Tall Man) as Abraham Lincoln.

Sequel to the highly amusing Westworld is a bizarro mix of dopey 70s era conspiracy mongering and a slower moving rehash of the original. Starring a bemused Peter Fonda, who either hadn't read the script was reacting naturally to the far-out dialogue or had access to some really great recreationals (probably both). Bonus material includes the trailer and some trippy radio spots.

Previously only available in a boxed set with its lame and lamer sequels, this watershed 1993 blockbuster is finally available on its own in Blu-ray. Impossible to believe this is 20 years old but the revolutionary-at-the-time effects still hold up as passable and the likes of Jeff Goldblum, Laura Dern and Sam Neill have never been better. 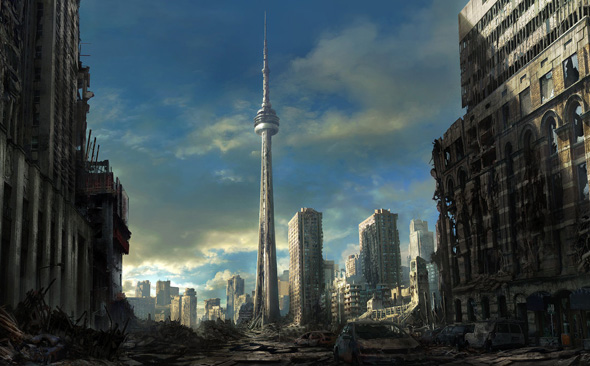 We may have escaped the Mayan apocalypse but it remains the end of the world as we know it in these 5 shot-in-Toronto movies, all available in one form or another and deserving a look if you live in the GTA and all highly recommended by Professor Brian Oblivion.

Local auteur David Cronenberg's grey-as-February 1990s adaptation of JG Ballard's shocking Sci-Fi novel might not be as in your face apocalyptic as some of his other works, but the painful niche of car crash sexual deviancy (never mind getting busy underneath the Gardiner) make this frosty auto-erotic fantasy as bleak as they come. Still criminally not available on Blu-ray, but the regular DVD and VHS will do for now.

Manages to make the end of the world boring, as highfalutin Toronto snobs bicker and wander the streets aimlessly, and never live up to the potential promised by the haunting Streetcar centric poster.

Bonkers showdowns all over town but the Nathan Phillip Square throw down is key.

Not a patch on the George Romero original but still far more terrifying than anything offered up by the Walking Dead and the first of many movies to use Johnny Cash's "The Man Comes Around" ironically.

Cyberpunk was a huge deal in the pre-internet days, attractingthe attention of nerds and future computer programmers. William Gibson was their oracle, and he penned this prehistoric Matrix that finds Keanu Reeves on the run. LOL at people still using VHS in 2021 and marvelling at the "immense" power of 320 gigabytes.