Filmmakers set up shark to help sell film at TIFF

Anyone who's been in the vicinity of The Hyatt on King during the last 24 hours will likely have noticed the head of a shark in the parking lot across the street. The marketing stunt is courtesy of a trio of Massachusetts-based filmmakers who are seeking distribution for their new film The Golden Scallop and figure setting up shop across from TIFF headquarters is as good a tactic as any to get attention.

The film itself is an 83 minute mockumentary based on the various cooking shows currently circulating on the food network. Its plot centers around the competitors, judges and customers of the 43rd annual Golden Scallop Championship. The film unfolds as over 100 eligible fried fish restaurants are narrowed down to a final three nominees who compete in front of hundreds of hungry patrons to be crowned the Golden Scallop Champion.

The three filmmakers - director Joseph Laraja, producer Michael Boisvert and writer/co-producer/actor Kevin Harrigan - have experience in short films which allowed them to gather some initial financing to produce the film. They'll be sticking around until Sunday hoping the shark gets some intrigued distributor to bite. 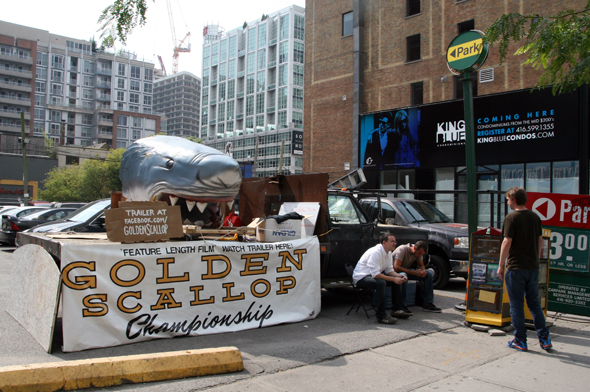