Where to still see films projected on 35mm in Toronto

How much longer will Torontonians be able to say a phrase like, "What a great film!" upon exiting the cinema? Sure, 'film' is but one of many synonyms for 'movie' - it's certainly less posh than the old-timey 'picture show' - and it may continue to stick. But as the years roll on, that four-letter word is going to start to sting a little. See, one's ability to watch a film on actual film is disappearing quite rapidly, and the number of Toronto cinemas that still show a majority of their films - if any - on celluloid is dwindling at an accelerating rate.

In the last 18 months, the Varsity, the Scotiabank formerly known as The Paramount, and the Yonge & Dundas cinemas formerly owned by AMC have all scrapped their 35mm projectors for new, state-of-the-art digital projectors (a noteworthy exception, Scotiabank still has 70mm capabilities for their IMAX screen). The Revue caved in less than two weeks ago and 'upgraded' to a full digital system, while former 35mm supporters Toronto Underground and The Cumberland have both recently shuttered after spending protracted periods operating on life support.

Why all the commotion, though? Cinema production is migrating over to the land of 1s and 0s, and our cinemas need to be equipped for this new, liberating, and relatively inexpensive new format, right? As David Lynch himself said after he abandoned film for good for his last feature, Inland Empire, "The sky's the limit with digital. Film is like a dinosaur in a tar pit."

But the problem resides more in preserving the integrity of the films that were filmed on film than resisting the evolution of contemporary production standards. At the moment, showing a 35mm film from a digital file is a bastardization. There is at least four times as much grain in each frame of film than there are pixels in the 2K video image zapping out of those spiffy Christie projectors, not to mention the heinous compression that so often flattens the depth of field. 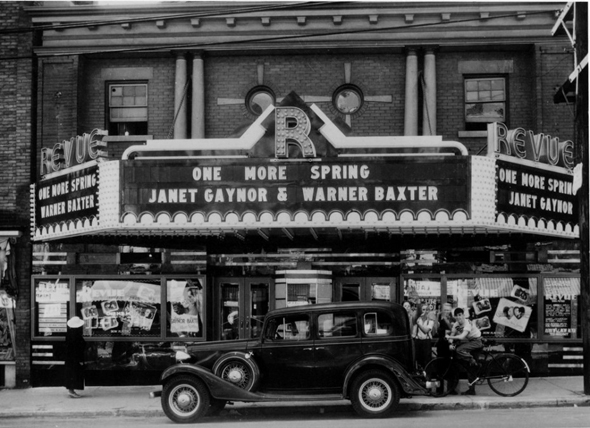 Idealistic as it may sound, there will probably one day be digital formats that are able to represent the 35mm clarity or our favourite cinema classics without any loss; we'll get used to a flickerless stream of successive images, and, just as well, the crippling expense of the new projectors will drop in price so that the arthouses that have survived to that point won't break the bank to keep up with the times. And - maybe - there will be a comprehensive library of digital versions of all movies, not just the canonical big boys.

While Toronto cinephiles wait for this altogether still quite distant scenario, here is a list of the remaining venues to still catch new and classic films on 35mm prints.

TIFF Bell Lightbox
One of the premiere cinematheques in North America, James Quandt and the folks at TIFF will continue to show film prints as long they're available to. The odd DCP print occasionally slips in there (usually for a new restoration like the recent ones for Jaws and Children of Paradise), but chances are that if you show up for a movie made before 2008, it'll be shown from film (and in the best available print, no less).

Innis Town Hall
Host to the occasional film festival (including Hot Docs and the Toronto Silent Film Festival, the latter of which is accommodated by the venue's perfectly functional - if a tad too dim - 16mm projector), Innis Town Hall might be best known as the home for the wonderfully curated Free Friday Films series. Organized by U of T's Cinema Studies Student Union (CINSSU), Free Fridays operates during the Fall and Winter terms only, and offers an eccletic mix of Hollywood and World Cinema classics, cult schlock, and recent arthouse releases, the majority of which are shown from film prints.

Bloor Hot Docs Cinema
First, the Bloor Hot Docs Cinema's raison d'ĂŞtre is to show recent documentaries, and pretty much all of those are shot digitally now. But give credit where it's due: when Hot Docs took over the Bloor and underwent their extensive renovation, they didn't toss out the 35mm equipment. To retain the spirit of the pre-Hot Docs Bloor, the programmers mix in frequent rep screenings of camp, cult, and horror classics as well as iconic docs of yore, and most of these are shown on film.

The Royal
Very much like the Bloor Hot Docs Cinema in that this is essentially a specialty first and second run cinema (in this case, for smaller independents and local films), where the rep screenings are even fewer and farther between. Like the newer docs showcased at the Bloor, the new titles are mostly digital because that's how they were made. But then, like Innis, they have the capabilities for 35mm prints of an occasional rep screening or any number of films in the small festivals they host (European Union fest, among others).

If the rumours are true, this section will be obsolete a few short months from now. Until then, we have the Carlton, Rainbow Market Square, and Canada Square Cinemas to thank for providing screens (however small they may be) for new releases to be shown on 35mm. TIFF Bell Lightbox also shows many of their new releases on film, though they make the odd exception (e.g. The Tree of Life showed in 35mm at the Varsity last summer (before they went digital) while the Lightbox only screened a digital version.

As the first runs become exclusively digital, so too will the seconds. For now, we've got these charming single screens still bringing us the occasional film print experience of new, arthouse releases: Mt. Pleasant Theatre, Regent Theatre, and The Fox. Most of the films at these venues will still be digital, though, and it's becoming increasingly rare for theatres to note the screening formats on their websites and programmes. The only way to be sure is to call ahead.

Less commercial and far more niche, there are a number of venues dedicated to presenting these smaller celluloid formats, too. These include the Trash Palace, Reg Hartt's Cineforum (which, last I checked, shows pretty much any and every format imaginable), and all of the avant-garde series. For the latter, you have The Free Screen at the TIFF Bell Lightbox, CineCycle in a lane near the intersection of Richmond and Spadina, Early Monthly Segments at the Gladstone, and the occasional one-off programme at the AGO's Jackman Hall. Check here for more on some of these series.

As this is a rapidly changing landscape, please note any corrections, omissions, and changes in the comments section.