360 Screenings is Toronto's latest best kept secret. Not just a film screening, more of an immersive mystery event, nothing is revealed ahead of time about which film you will be experiencing. Even the location and dress code are kept under wraps until 24 hours before it begins.

I say "experiencing" rather than watching a film, because 360 Screenings are not a passive activity. Co-founders Ned Loach and Robert Gontier are "devoted to creating live performance / film hybrid events that take our participants out of the audience and allows them to step into the film". My only interaction with Ned before the event was the short and cryptic email "wear black".

Wearing two black shirts, two pair black trousers, one pair black boots, two pair black socks, one black coat, and carrying three hundred dollars personal burial money (which I would spend on Mill Street Tankhouse Ale), I was feeling a bit layered and overdressed for a bicycle ride to the Distillery District. I arrived outside of the Fermenting Cellar, where a sold out crowd of about 175 similarly dressed patrons had already lined up.

A badly bruised security guard stood stoically blocking the entrance to the event, and when he would not answer any questions I determined he was part of the cast. I was then given a name tag sticker from an organizer outside, to differentiate me from the actors once I got inside.

Suddenly the door opened and a giant penguin walked out, and attempted to slide into line. "Maybe my medication isn't working", I thought. I hadn't been sleeping lately, and with insomnia, nothing is real. 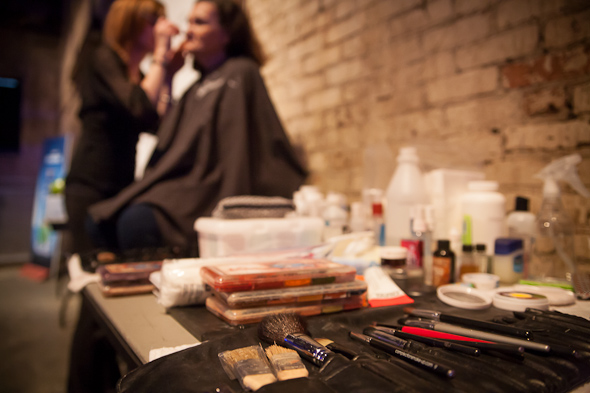 Inside, two lovely ladies from the College of Makeup Art & Design made me look like I had a broken nose. They gave anyone interested an assortment of black eyes and bruises. While being made over in the chair, I looked around at the beautifully spacious interior of the Fermenting Cellar (originally constructed in 1859) and took in some of the great set pieces that were built.

To my immediate left a support group sat in a circle, eyes closed, holding hands. Straight ahead a table was strewn with weird chemicals where someone was making soap, pages out of an Ikea catalogue hanging over his head. Next to that vignette, a man was inspecting a disabled car while a bombshell of a woman harassed him. Lastly, and I'm embarrassed I didn't see this first, several men were fighting in a cage. If you haven't already guessed what the film was, I'm not going to tell you, because the first rule about Fight Club is you don't talk about Fight Club. Aw hell, I did it. 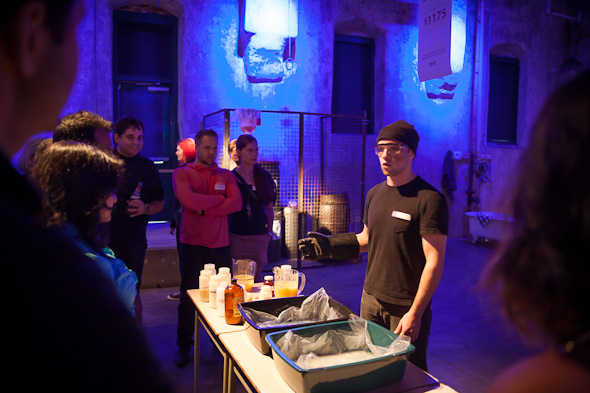 The set pieces were too well built to keep the films mystery for long. Perhaps if the organizers had only revealed one vignette at a time, least obvious to most obvious, the secret could have been kept longer. Despite that, knowing the film allowed me to interact with the players on a really fun level. A doctor approached me and asked how I had been sleeping, and I replied with a bit of the script that I had memorized. 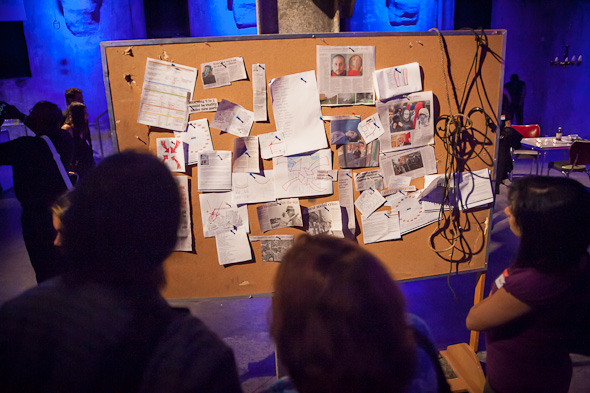 Walking by cork boards covered in news articles and plans of mayhem, past slices of film strips and filthy bits of furniture, I couldn't help but notice many of the support beams in the room had time bombs strapped to them, and they were actually counting down. I was bumped into by a flight attendant that told me cryptically to make sure my "tray table was in a fully upright position". I asked her if she was hitting on me and she quickly scurried away.

The foley sound station was my favourite area. Here you teamed up with another guest and grabbed random items like boxing gloves, water jugs, rolled up magazines, sticks and more, and banged them together in front of a microphone to produce the sound effects for the stunt fighters performing in front of you both. I tried a carrot on a head of cabbage, which produced a nice meaty sound until the carrot broke, flying into the crowd. One girl hit a watermelon with a hammer and was shocked by the juicy results. Later, an older gentleman picked up the watermelon and did the exact same thing. It was hilarious! 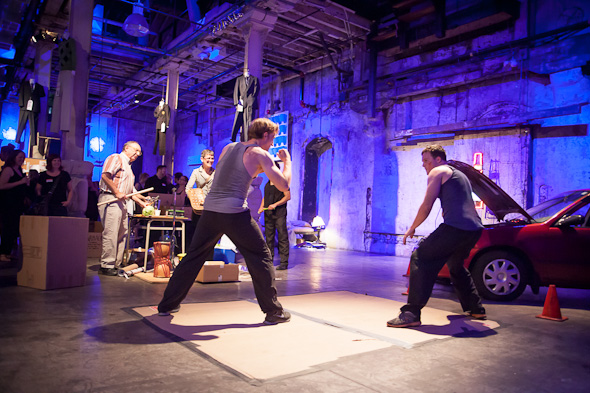 About an hour in, most of the guests were well lubricated with beer and wine, and were enjoying single serving shots of lobster bisque, when an alarm went off. Everyone crowded near the curtained area and an Ed Norton looking actor came out recreating the scene from the film where Bob (Robert Paulson) is revealed to be dead. Shortly, and to my delight, most of us began chanting "His name is Robert Paulson".

The film was officially revealed then, and the screening began. I have always loved the film FIGHT CLUB. But seeing the audience hear lines that mirrored conversations they had with the players, and recognizing characters that they had just met in person, was extra special. When the scene featuring Brad Pitt unzipping his pants to "season" the lobster bisque came on screen, a collective groan went out from the crowd who had partaken in the appetizers. This level of detail made the event a real success, and I can't wait to see what they'll do next.

The next secret event is tentatively scheduled for October, and promises to be "frightening".

I'll see you in line.

360 Screenings are secret and are located in to-be-revealed heritage buildings around Toronto. Tickets are $60, $40 for artists and/or the under 30 crowd. Beer & Wine $5. More info on the event's web site.