This week in Rep Cinema: Some Like it Hot, Packaged Goods, I am a good person/I am a bad person, Back to the Future, The 5,000 Fingers of Dr. T

This Week in Rep Cinema features second-run and classic film selections from cinemas such as the Bloor Hot Docs Cinema, The Fox, The Revue, The Royal, Toronto Underground Cinema, the Projection Booth, TIFF Bell Lightbox, and more.

While the temperature rises in Toronto this week, the cinemas are sizzling too. TIFF heats up with the launch of a retrospective program Once Upon a Time, Lebanon which features progressive and bold works from Lebanon's post-civil war era. Also at TIFF is the Gentlemen Prefer Blondes series, a roundup of some of the best films of the fifties starring blonde-haired actresses. The Revue Cinema also launches Rep Cinema Revisited this weekend, featuring cult classics from the last 30 years to celebrate the 100th year of the cinema. Toss in a few Luminato screenings and you've got a full schedule for the week.

TUESDAY JUNE 12 / SOME LIKE IT HOT / TIFF BELL LIGHTBOX / 6:30PM
Billy Wilder's raunchy drag comedy featuring career-defining performances by Marilyn Monroe, Jack Lemmon and Tony Curtis finds its way back to the TIFF Bell Lightbox for the Gentlemen Prefer Blondes: The Blonde in Fifties Hollywood Cinema series. For the uninitiated, the film centres around a pair of down-and-out musicians who become the only living witnesses to St. Valentine's Day Massacre in Chicago. Keen to get out of town quickly, they hitch a ride the only way they can, with an all-women's musical group headed to Florida. Tickets are $12 and can be purchased at the cinema.

THURSDAY JUNE 14 / I AM A GOOD PERSON I AM A BAD PERSON / ROYAL CINEMA / 9:30PM
Ingrid Veninger's first film Modra starred her daughter, a choice that must have affected their relationship in some ways, as becomes clear in her most recent film. I am a good person I am a bad person is so metatextual a piece that it almost feels more like a documentary. Filmmaker Ruby travels across Europe with her aloof eighteen year old Sara, in an attempt to get closer to her daughter while doing the film festival circuit. After a comment during a Q&A session sends Ruby into an existential tail-spin the two find their tenuous relationship disintegrating. The film runs until June 21 and tickets can be purchased at the cinema.

SATURDAY JUNE 16 / BACK TO THE FUTURE / REVUE CINEMA / 9:15PM
Travel back in time to 1985 and hang out with Marty McFly, a teen with rock-star aspirations, a hot girlfriend, a weird older scientist friend (?) and an attitude problem. Unfortunately, this scenario won't last for very long as Marty accidentally time travels to 1955 and screws up his parents courtship. Join the Revue Cinema as it celebrates 100 year of existence and 40 years of existence specifically as a rep cinema and enjoy all those favourite cult classics from your youth. Whether it's Back to the Future (mine!) or Ghostbusters, Grease or The Breakfast Club. Tickets are $10 and can be purchased at the cinema.

SUNDAY JUNE 17 / THE 5000 FINGERS OF DR. T / BLOOR HOT DOCS CINEMA / 3:30PM
Finish off your weekend with a go at Dr. Seuss's only live-action film The 5000 Fingers of Dr. T, an abysmal box office failure that people responded to so poorly I'm surprised Jim Carrey's Cat in the Hat ever was put in production. Considered a bizarre musical cult classic, our protagonist is Bart, a young boy tormented by his piano lessons who envisions a world where his music instructor is an evil genius set on enslaving 500 boys to a musical machine, Bart being the 500th player. Tickets are $11 and can be purchased at the cinema. 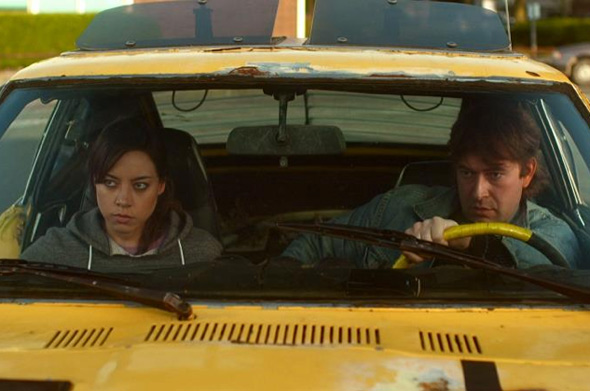 Time travel movie Safety Not Guaranteed starts playing in theatres on June 15th. Check out this contest on the movie's Facebook page for a chance to win a free watch.