There's a very good chance that Pattinson fans will react poorly to the radically stylized & starkly inhuman Cosmopolis, but really, who cares? Indeed, it actually took me a while to realize that The Man No Longer Limited to Edward Cullen wasn't in fact giving one of the worst screen performances I'd ever seen, but that he was, conversely, giving a pretty fantastic portrayal of someone whose mind no longer allowed him to appear human. Getting adjusted to Cosmopolis' unique, robotic brand of stream-of-conciousness takes a reel or two. Once it picks up steam, though, the rush of ideas hit your psyche like a riveting rush of 1s and 0s. Even more talky and heady than his previous film, A Dangerous Method, the two form a complementary pair that sees his interests continue the trek north of the collar bone. It's about as fun as cerebral cinema can get.

I had no idea this was going to be the summer movie until pretty late in the game (maybe it was two months ago that a friend notified me of one of its viral non-trailers, which I tend to avoid), and I'm still somewhat baffled at the level of rapturous anticipation most are maintaining over it. Sure, Ridley Scott has won some Oscars and had some hits in the interim, but he's still a markedly different filmmaker than he was thirty-three (33) years ago. It might as well be a distant cousin directing this better-late-than-never Alien tie-in (and early word from the overseas launch suggests just as much). But stunted expectations aside, who doesn't get a kick out these expensive sci-fi spectacles, good or bad? I'll be there. 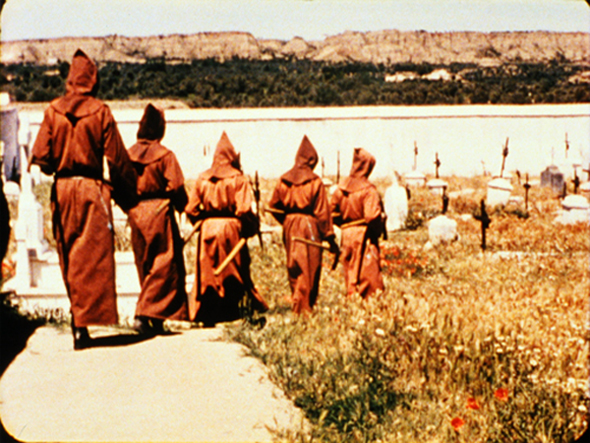 This month's focus is on two examples of embodied vision in avant-garde cinema, by way of Marie Menken's unfinished 1961 film The Gravediggers of Guadix and Ute Aurand and Ulrike Pfeiffer's largely improvised OH! The Four Seasons. The term 'embodied vision' can best be understood as first-person point-of-view (e.g. Gaspar NoĂŠ's Enter the Void), as the camera can literally be taken to be the eye of the protagonist (or in these cases, the filmmakers). The historical import of this work is also noteworthy; Menken in particular was a big influence on experimental cinema's Godfather Stan Brakhage, while Aurand is a current staple in major avant-garde venues all over the world (she's screened work in five Wavelengths programmes at TIFF in the eleven years of its existence). Entrance is once again based on a suggested $5 donation; arrive on time to win door prizes.

Toronto Russian Film Festival (June 7-12; Innis Town Hall)
Previewed thoroughly here. Most screenings take place at Innis College's Town Hall, though there are a couple of afternoon programmes on the 10th that play at the ROM. Ticket prices vary, so check out their ticketing page for details.

Toronto Japanese Film Festival (June 7-21; Japanese Canadian Cultural Centre)
This festival isn't as endless as the dates indicate, as there's a five-day hiatus between the penultimate film and the Closing Night presentation of Friends After 3.11. In its inaugural year, TJFF is going all out to bring us a healthy slate of Canadian and Toronto premieres, even if the JCCC is way the hell out near Don Mills. It's a pretty solid and eclectic mix of films, really, with major auteurs like Sion Sono and Takashi Miike presenting their new films Guilty of Romance and Harakiri - Death of a Samurai (respectively), as well as hits from local festival like Chronicle of My Mother. Tickets are $10 per film ($8 for JCCC members); a couple of screenings are already sold-out, so act fast if you intend to make it out to any of these.

Luminato & TIFF Go to the Movies (June 8-17; TIFF Bell Lightbox)
Briefly touched on here, Luminato is fast becoming the do-it-all event of Toronto summers. As if bombastic art shows, magic acts, stage plays and frickin' Einstein on the Beach weren't enough, they're also bringing one of the most exciting and singularly curated selections of films to the Lightbox in some time (there's even, egad, a silent film!). This is in large part because they've opted to highlight the career of Robert Lepage this year, whose career is pretty all over the map. Among other gems, Jack Smith's Flaming Creatures, Jean Cocteau's Beauty and the Beast, and Robert Weine's 1920 expressionist masterpiece The Cabinet of Dr. Caligari will play at the Lightbox for only $5 a pop. Tickets go on sale day-of; go to all of them, and expect long lines.