This Week in Film: Martha Marcy May Marlene, The Skin I Live In, Le Havre, Koyaanisqatsi, Rendezvous with Madness, Diaspora & Regent Park Film Festivals, and what's new on DVD and Blu Ray

This Week in Film rounds up the most noteworthy new releases in theatres, as well as key DVD / Blu-Ray releases, festivals, and other cinema-related events happening in Toronto.

It feels like I've been singing praises for this film for ages now. I can't make any promises that this is the last time, but alas, here's some more. Finally hitting regular theatres, the talents of debut filmmaker Sean Durkin are now on display for the masses to behold. Working with a team that includes Afterschool-director Antonio Campos (and that's another amazing debut film, arguably even more masterful than Durkin's here), this emerging collective is one to keep very close tabs on. Is Martha... about the ambivalent qualities of community? a portrait of a lost soul? the crippling emotional vacancy of the upper-middle class? Do see it and decide for yourself.

Full Disclosure: Sigur R贸s were my favourite band when I was in high school, not least because of their gorgeous, ethereal, and vaguely controversial music videos. With INNI, which premiered at the Venice Film Fesitval last September, they're pushing their music's marriage to the avant-garde even further. Vincent Morrisset (director of the Arcade Fire doc, Miroir Noir) filmed a full 75-minute concert by the Icelandic post-rockers, and the result is a wash of grainy, noisy, black-and-white abstraction that adequately suits the moods of the music.

The Skin I Live in (Varsity)

Pedro Almod贸var is about as reliable as the appearance of the morning sun. It's truly incredible the consistency of his filmography, as he bi-annually churns out gripping, delirious, and often haunting tales of "people on the verge." This is an adaptation of Thierry Jonquet's novel Tarantula. Given how many twists and turns there are, it's best to go in as cold as possible. Just know it's about a plastic surgeon, and his lover. That should be more than enough to get anyone caught in its depraved web.

Also in General Release This Week

Before Baraka, Samsara, the other Qatsi films (obviously), all those time-lapse videos of Toronto, and, dare I say, The Tree of Life, there was Koyaanisqatsi. Combining an epic score by Philip Glass with monumental footage of culture and war, this is the original culture-defining visual essay, and it remains stirring despite the decades of evident influence. The only way to see it is on the big screen, and that's just what U of T's Cinema Studies Student Union is doing, for free, at 7pm on Friday at Innis Town Hall. 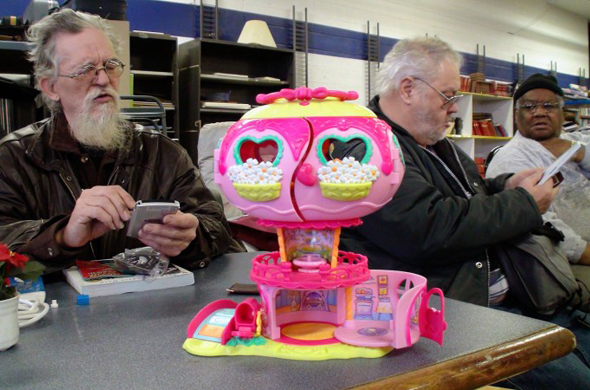 (Cinecycle)
Pleasure Dome will be showing several films from the last decade of Donigan Cumming's output at 7pm this Saturday at Cinecycle. Cumming's work "is notable for its concern with breaking taboos and uses of media to stimulate strong audience response," and he is "famous and infamous for his representations of "the radically 'other.'" The screening will also serve as a book launch for a collection of essays that discuss and dissect his work. Splitting the Choir is being co-presented by Vid茅ographe.

Diaspora Film Festival
'Diaspora', as defined by the festival, "refers to the dispersion and migration of a people from their homeland and the communities they form in new lands." Now in its 10th year, Diaspora runs from November 1 to 6 at both Innis Town Hall and The Carlton. Things kick off on Tuesday night (Nov. 1) with a discussion with Deepa Mehta before she introduces her 2002 classic Bollywood Hollywood. Check their website for details on all films and screening times.

Regent Park Film Festival
The 9th Annual Regent Park Film Festival arrives November 2 for four days of eclectic short-film programming (as well as one feature), composing one of Toronto's most feel-good festivals of the year. Among dozens of highlights is Atlantiques by Mati Diop, which was one of the stronger films in TIFF 2010's Wavelength's programme. "This year's selections showcased a variety of different genres including animation, fiction, to documentaries with real-life stories. The 'Stories from the Inner City' showcases the works of two Regent Park youths in a personal lens." All public screenings will take place at Lord Dufferin Public School (350 Parliament St.).

Rendezvous With Madness
Returning with its essential mix of films dealing with mental illness and addiction, this year sees a the Rendezvous with Madness festival with over 25 programs of feature and short films, artist talks, industry events, installations and performances that aim to help awareness of mental health move into the mainstream. Highlights from the festival include the endearing Sisters & Brothers (Carl Bessai) and the gritty Gods of Youth (Kate Twa), as well as a solid Experimental Shorts Programme. Rendezvous with Madness runs from November 4 to 12, and is spread out to play at the TIFF Bell Lightbox, Workman Arts, NFB Mediatheque, and The Centre for Addiction and Mental Health.

There's a strong showing of classic silent cinema hitting shelves this week, both from Kino. First is a DVD box set compilation of films they've release over the years, The Artists (The Best of Kino Silent Classics, Vol. 1), which includes Fritz Lang's towering Metropolis, as well as perhaps the greatest of all silent films, D.W. Griffith's Broken Blossoms. Getting a luscious Blu-Ray edition is a stand-alone release of the original screen adaptation of The Phantom Of The Opera from 1925, directed by Rupert Julian.

A couple of Hot Docs 2011 alumni are getting DVD editions this week: Magic Trip and Hot Coffee. Both cover very different subject matter, but were among the most buzzed about films at the festival last May.

Speaking of festival alumni, two of TIFF 2010's most bizarre films are finally finding their ways onto DVD this week: Catherine Breillat's elliptical, and typically sexualized, The Sleeping Beauty, and master documentarian Errol Morris' Tabloid, about when Miss Wyoming was charged with abducting and imprisoning a young Mormon Missionary.

Finally I want to spotlight two classic William Wyler films getting Blu-Ray editions this week: The Big Country and The Collector. He's best known for Ben-Hur, but these films see him in a calmer, but no less striking, mode of storytelling than the aforementioned epic.