After a summer of hype and a year of anticipation the 2011 Toronto International Film Festival finally gets underway today. Here, in our third and final installment of our TIFF preview series, we review nine more films we've checked out at media screenings during the last week. As usual we categorize our picks into those we highly recommend, recommend or don't recommend. For additional films, check our preview posts 1 and 2. 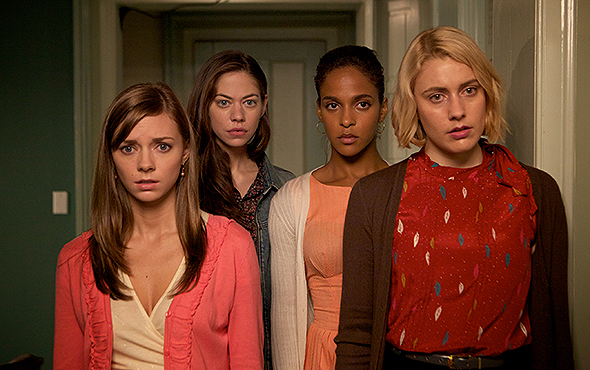 DAMSELS IN DISTRESS (September 13, 6PM; September 14, 915PM)
Chronicling the romantic misadventures of the odor-obsessed coeds who run an upper crust university's suicide-prevention center, Whit Sitllman's long-awaited Damsels in Distress is a wry, absurd delight. Indie darling Greta Gerwig is wonderfully deadpan as Violet, the verbose leader of a preening, pretentious, but well-intentioned pack, whose notion of philanthropy involves dating one of the school's farcically simpleminded frat boys, and whose chief life ambition is to kick-start an international dance craze. Her priggish, privileged existence is thrown into disarray when her unsolicited relationship advice duly backfires, but tap choreography and sunshine-scented bar soap offer an unlikely path to redemption. Meanwhile, Violet's transfer student protĂŠgĂŠ (Annaleigh Tipton) is torn between the sly, faux sophistication of a French post-grad (Hugo Becker) and Adam Brody, as a preppy, posturing playboy. All involved are perfectly cast and Gerwig shines, but it will come as little surprise to Stillman fans that it's Damsels meticulously mordant dialogue that truly steals the show. Evidently, despite a 13-year hiatus, Stillman's rapier wit and delicately skewed sensibilities remain firmly intact. (JC)

SHAME (September 11, 7PM; September 13, 315PM)
In 2008, a lesser-known tandem of Michael Fassbender and Steve McQueen combined to devastate TIFF audiences with the indelible Bobby Sands biopic, Hunger. Three years on, the duo, now two of the festival's big buzz names, are looking to repeat the feat with Shame, an equally fearless portrait of sexual addiction. As the secretive, smut-obsessed Brandon, Fassbender bears all and then some, giving perhaps the best performance of a career that is already frighteningly accomplished. Both insatiable and believably irresistible, his habitual, compulsive conquests are interrupted when his impulsive, self-destructive sister (Carey Mulligan, straining resolutely against type) turns up uninvited, cramping his compact Manhattan apartment as well as his style. Visually, McQueen, too, continues to enhance his reputation, rendering Brandon's constant, near-predatory sate of arousal with consummate skill. His screenplay, however, co-written by McQueen and Abi Morgan, accounts for Shame's only notable shortcomings. Specifically, Morgan and McQueen follow a remarkable climactic moment with an unfortunate contrivance, and a series of false endings that pack all the subtlety of a runaway train. Otherwise, Fassbender and his director deliver another stunning collaboration. (JC) 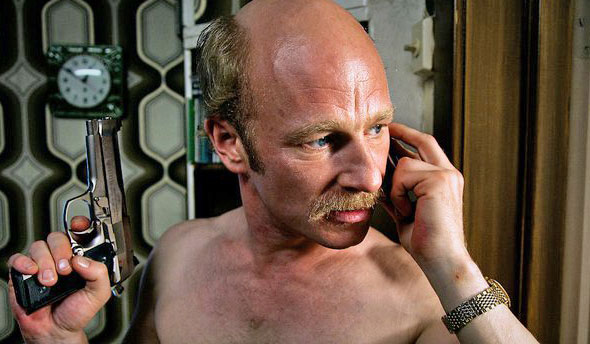 HEADHUNTERS (September 10, 9:45pm; September 11, 9:15pm)
I loved this film. Based on a Norwegian bestseller, it lives up to its promise as a wildly entertaining thriller. Fast paced with unexpected plot turns, it centers on a high-powered 30-something who steals art from the homes of CEOs who he meets in his job as a Corporate Recruiter. It's all for a just cause though - to furnish a lavish lifestyle for himself and his supermodel-stunning wife. But then something unexpected happens. TIFF Programmer Steve Gravestock writes "It's doubtful you'll see a more engaging or timely thriller this year" and I'm inclined to agree. Sadly, at the time of this writing tickets to both screenings have gone to rush so start lining up for the back/front row of the AMC or Scotiabank now. (TS) 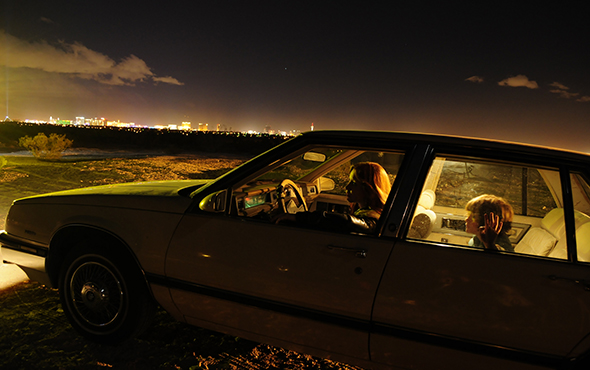 THINK OF ME (September 9, 515PM; September 11, 1045AM; September 17, 615PM
Though less masterful than either Kelly Reichardt's Wendy and Lucy, or the Dardennes brothers' L'Enfant, Bryan Wizemann's Think of Me is a noteworthy thematic companion, and a compelling entry in American neo-neo-realism. Lauren Ambrose - of Six Feet Under fame - delivers a formidable performance as Angela, a Las Vegas single mother on the margins, in both economic and geographic terms. The glittering decadence of the Strip is ever-present, albeit distant and intangible, reinforcing the precarious state of her personal finances. Serving a similar purpose (if rather more on-the-nose) is her baby's literal need of a new pair of shoes. "Baby", in this case, means the 8-year-old Sunny, played by newcomer Audrey Scott with a precocious, affecting naturalism. When a co-worker (Dylan Baker) notices that Angela has stretched herself desperately thin, he casually informs her that his sister, an affluent Torontonian, recently failed in an attempt to adopt a child. His implication escapes Angela at first, but Wizemann's intentions are immediately clear. That Think of Me succeeds despite a predictable third act is testament to characters that are convincingly drawn and artfully performed, and its sensitive evocation of a struggle that is all too believable. (JC)

W.E. (September 12, 6:30pm; September 13, 2:30pm)
Don't believe all the negative buzz coming out of Venice. Madonna's sophomore directorial effort (she also co-wrote the script) is a stellar one - a period piece that tells the story of Wallis Simpson and Britain's King Edward VIII intertwined with a modern day Manhattan tale. The former Material Girl gets rich performances from the cast, most notably Andrea Riseborough and James D'Arcy and the constant switching between the 1930s and present day helps create an intriguing and entertaining blend of fact and fiction. While some critics might take Madonna to task for her treatment on Simpson, the POV of this film shouldn't be looked at as a fault but instead a perspective that is likely to create more interest in this contentious period of British history. (TS)

WE NEED TO TALK ABOUT KEVIN (September 9, 8-pm; September 11, 9:15am)
This film is the very definition of bleak but perhaps that's to be expected. Tilda Swinton plays the mother of a son who commits a Columbine-type massacre. While I have to admit it's interesting to consider this type of scenario from a mother's perspective it's not exactly a film that offers any answers, hope or comfort. Prepare to be depressed when the credits roll, or, at least thankful that your son/nephew/little cousin/brother isn't as deranged (hopefully) as the Kevin depicted here. On the bright side, the film is very well crafted and director Lynne Ramsay does a good job keeping us guessing how certain plot elements are going to unfold. (TS)

IDES OF MARCH (September 9, 9:30pm; September 10, 11am)
George Clooney has two films screening at TIFF this year and if advance buzz from Venice and Telluride is any indication he might just be the man of the festival. While everyone's favourite George stars in both films (the other one being The Descendants), in Ides of March he doubles (or is it quadruples?) as a writer, producer and director. The plot centers on a Democratic primary in Ohio with Clooney as the president-wannabe and fellow hearthrob Ryan Gosling as a key member of his campaign staff. Paul Giamatti, Philip Seymour Hoffman, Marisa Tomei, Evan Rachel Wood, and Jeffrey Wright also feature prominently in performances that are likely to get consideration come Oscar time. The North American release date is scheduled for early October so it's not essential to see it here but it's definitely one to add to your watch list at some point. (TS)

RESTLESS (September 8, 9PM; September 9, 4PM)
Even accounting for the considerable diversity of his previous efforts, Restless is a curious addition to Gus Van Sant's filmmography. Granted, as an evocation of adolescent uncertainty, its subject matter is of a piece with some of his most lauded work (Elephant, Paranoid Park), but in tone and style, Restless feels like the debut feature from an indie up-and-comer, rather than a filmmaker of Van Sant's seasoned pedigree. (Indeed, as the first film from twentysomething screenwriter Jason Lew, that's precisely what it is.) The problem is, Restless doesn't feel like a debut in the sense that it's uncommonly fresh or vibrant, but, on the contrary, gives the impression of a film that strives, a little too earnestly, to be "different" (Mia Wasikowska's chosen term, as the terminally-ill Anabel, for Henry Hopper's funeral-crashing protagonist). "Different", in this case, means morbid and mawkish and quirky, but also a film that hews closely to indie romance formula, down to its invocation of a manic pixie (dying) girl. Wasikowska maintains her recent high standards, but struggles to elevate maudlin material that seems distinctly out of place in TIFF's Masters programme. (JC) 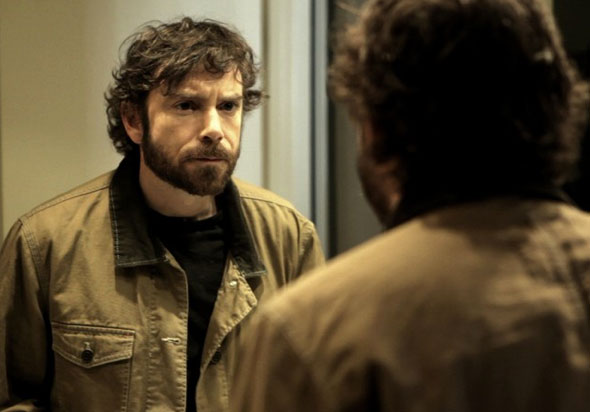 DOPPELGANGER PAUL (September 12, 9:15pm; September 14, 3pm; September 17, 7pm)
I hate to crap on Canadian made films but this one simply doesn't stack up with so many stronger films showing at this year's TIFF. Billed as a simple comedy, Doppelganger Paul doesn't have too many laughs but I suppose the quirky characters do elicit the odd smile. The story basically revolves around two lonely guys and a manuscript. It gets published but not in the way you'd expect. Then a bunch of other stuff happens that makes no sense. And nobody in the film aside from the two main protagonists have enough screen time to make their characters anything but caricatures. Overall, it's a frustrating film (once you stop to think about it and poke holes in the script) that sat with me for at least a day (thankfully, not more) because I kept thinking about parts of the story that had no basis in reality. But maybe that was the whole point. (TS)

With contributions from Julian Carrington (JC) and Tim Shore (TS).