Even amidst the last minute madness of festival preparation, TIFF continues to honour its year-round commitment to promoting Canadian filmmaking talent. Their latest Lightbox installation is Otherworldly, a free exhibition that literally spotlights the best in Canadian costume design. Presented in association with CAFTCAD, it opened this weekend, and will occupy TIFF's Canadian Film Gallery through March 2012. With pieces ranging from zombie neck stumps made to measure for George A. Romero, to the pompom'd headpiece designed for Heath Ledger's final performance, it's informative fun for the film-loving fam, and will make for an ideal mid-fest pit stop.

As Director of TIFF's Film Reference Library, Otherworldly curator Sylvia Frank has culled a selection of artifacts from fantasy, sci-fi, and horror features, both domestic and cross-border. Canada has long been a hotbed for outsourced Hollywood productions, not only as a passable facsimile for the US, but also for the skill and craft of local production crews. Otherworldly aims to highlight the latter, and, in the process, reveal some behind-the-scenes tricks of the trade. 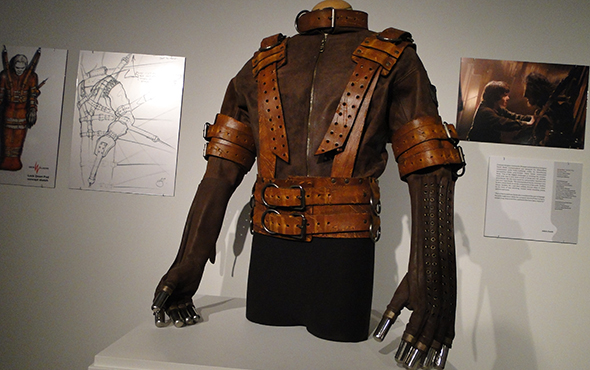 Several exhibits are accompanied by handy video how-to's, detailing, for example, the secrets of the Saw series' copious, convincing blood spatters, and the faux frost that will cling to Joel Edgerton's hand-stitched parkas in the forthcoming prequel to John Carpenter's The Thing. The designers' notes also illuminate the unique challenges of creating costumes for genre films, which often call for heavily distressed looks, inconspicuous harness elements for stunt sequences, and garments designed to accommodate post-production CGI embellishments.

In total, the exhibition consists of dozens of costumes, sketches, artifacts and photos from 15 films, including classic and recent cult favourites such as David Cronenberg's Videodrome, Darren Lynn Bousman's Repo! The Genetic Opera, and Vincenzo Natali's Splice. 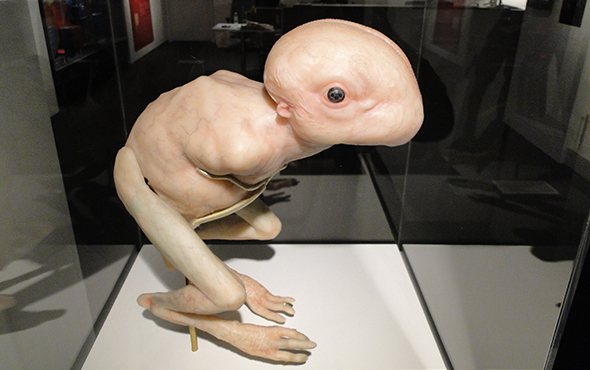 For hardcore effects enthusiasts, wannabe Stan Winstons, and those with particularly ambitious Halloween plans, prolific costume designer Alex Kavanagh (the Saw series, Splice, Land of the Dead) and creature designer Amro Attia (Splice, Silent Hill) will appear in person on October 13 (7pm) to discuss the process of developing "Dren", Splice's human-animal hybrid protagonist, that was, in reality, also a technical hybrid of practical effects and CGI.

On October 29 (11am), Sylvia Frank will lead a guided tour of the exhibition, offering visitors a behind-the-behind-the-scenes look at how Otherworldly came together, discussing her partnership with CAFTCAD, and sharing general insights into her curatorial process. 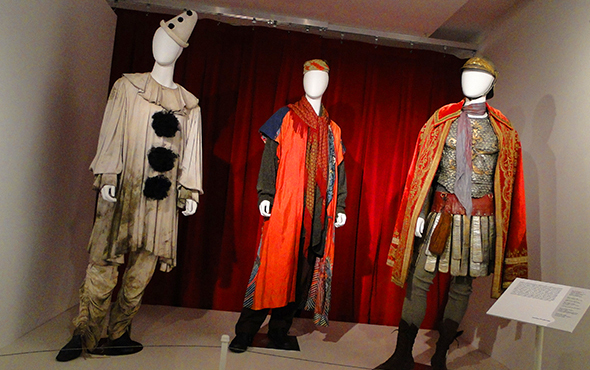 The third special presentation, on November 14 (7pm), is a keynote talk conducted by Monique Prudhomme, one of Canada's most accomplished costume designers, and an Oscar nominee for her work on Terry Gilliam's The Imaginarium of Doctor Parnassus. Her discussion will focus on costume design as it relates to contemporary and vintage fashion, and how, in addition to creating custom pieces from scratch, productions often call for the transformation and adaptation of everyday ensembles.

The Canadian Film Gallery is located on the 4th floor of the TIFF Bell Lightbox, Reitman Square, 350 King Street West. Closed Monday, September 5. Regular hours: 12pm to 5pm. Festival hours: 10am to 6pm. Ticket Sales and booking information for special events and workshops will be available at tiff.net in late September.