As the city gears up for the 35th annual Toronto International Film Festival and the grand opening of the Bell Lightbox this September, much attention has been focused on the changing face of local film exhibition.

With its impressive facilities and a mandate to screen first-run films, retrospectives and specialty programming, the Bell Lightbox has been positioned by the Festival Group as a much-needed locus for film culture within the city, as well as an opportunity to bridge the gap between commercial multiplexes and artist-run centres.

Still, there has been some cynicism as to whether the new facilities will ultimately shift attention away from some of the more venerable independent theatres in the city by offering up a state-of-the-art venue to house smaller festivals and screen non-blockbuster fare. While this obviously has yet to be seen, a look back at the history of film exhibition in Toronto reveals that the city has always had an ever-evolving and rather complicated relationship with the medium. 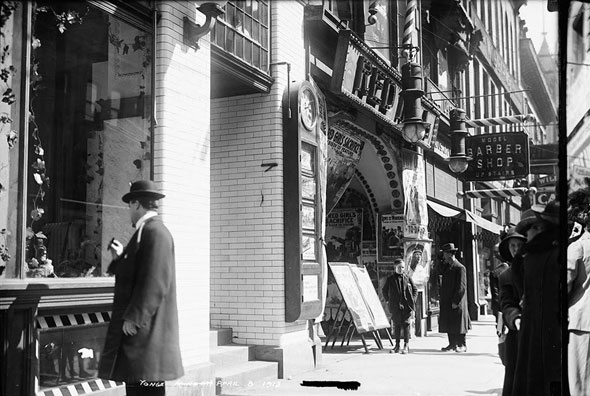 While Toronto had its first taste of "moving pictures" at the Industrial Exhibition of 1896 with the debut of Thomas Edison's Vitascope, the first permanent movie house built in the city was The Theatorium (later the Red Mill) at 183 Yonge Street. Opening in 1906 with a screening of Edison's own "The Train Wreckers" (1905), the theatre was a meager one hundred feet by seventeen feet, and cycled twenty-minute programs comprised of short melodramas, comedies, and travelogues.

A lecturer stood at the front of the theatre and entertained audiences with playful anecdotes that were designed to distract viewers as projectionists prepared the next reel. Spectators sat and stood in the gallery, and were encouraged to move up as each patron exited the theatre in order to ensure that there was an efficient turnaround. 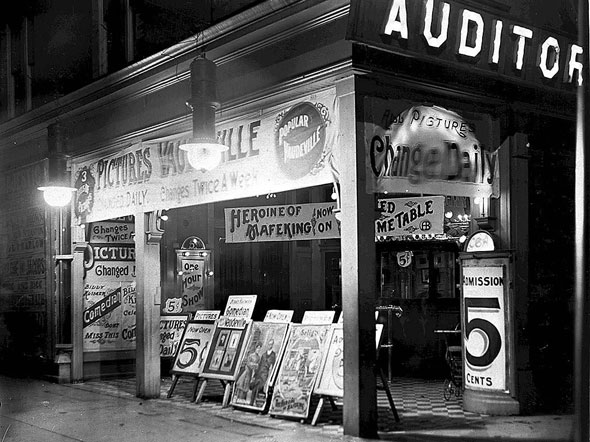 The venue was popular enough to set off a wave of new theatres in the city, with other notable locations including the Auditorium (later the Mary Pickford Theatre) at the northwest corner of Spadina and Queen (now a McDonald's), the Comique Theatre at Yonge and Dundas, the Revue Cinema (1912) at 400 Roncesvalles, and the Fox Theatre (1914) at Queen Street East and Beech Avenue, the Eglinton Grand (1936) on Yonge and the Kingsway Theatre (1939) at Royal York and Bloor.

The current Bloor Cinema opened in 1905 as the Madison Theatre, and it held a Class A license, which permitted both theatrical performances and film screenings. The venue would go through a number of transformations over the course of the next one hundred years - in 1941 it would become a Class C establishment (showing vaudeville and movies) renamed the Midtown; in 1967 it would become the Capri Theatre; and in 1973 it reopened as an adult movie house known as the Eden. It was only in 1979 that the venue was christened the Bloor and transitioned into a repertory cinema. (A bit of trivia: the original Bloor Cinema was actually housed across the street in what is currently Lee's Palace.)

The current Elgin and Winter Garden Theatre started its life in 1913 as the Loew's Yonge Street Theatre, with the upper level Winter Garden Theatre opening up the following year. The shift away from vaudeville to motion pictures led to the closure of the upper level in 1928, and the downstairs became a movie-only venue from 1930 onward, with the Canadian premieres of /Gone With the Wind/ and /The Wizard of Oz/ taking place at
the facility.

With the introduction of Cinemascope, structural changes were made to the building that led to the removal of opera boxes, orchestra pit and proscenium arch, and the building was sold, re-branded the Elgin, and transformed into a second-run movie house during the 1970s. It closed its doors in 1981, only to be designated a National Historic Site and restored as the last remaining "stacked" theatrical venue later in that decade.

Like the Madison and the Elgin, many entertainment venues in the city evolved throughout the century to meet the changing demands of patrons. As mass film audiences became more rare with the rising popularity of television, many large single-screen theatres like the Uptown (at Yonge and Bloor) and the Imperial Six (at Yonge and Dundas, now the Canon Theatre) were converted into multi-screen venues, and were later either demolished or converted back into live theatre venues as an indirect result of the introduction the "Cineplex" concept by Canadian theatre mogul Nat Taylor. 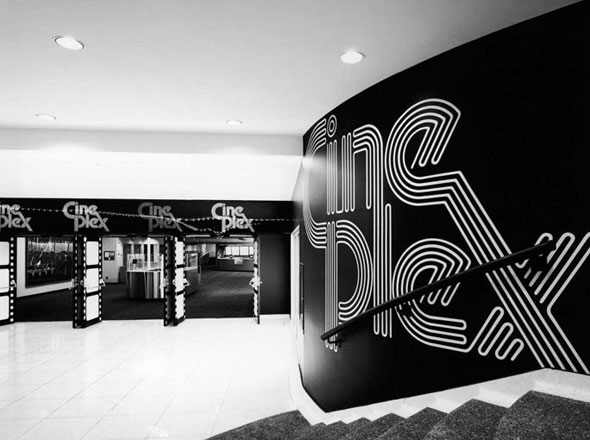 The popularity of this format influenced to the closure of many small cinema houses, and eventually led to the development of corporate "mega-plex" cinemas like the AMC at Yonge and Dundas and The Queensway in Etobicoke.

Still, even as commercial interests have dictated the direction of cinema exhibition over the last century, conscious efforts by members of Toronto's film community and organizations like TIFF have ensured the survival of beloved cinema houses like the Bloor, the Revue, and the Fox by maintaining them as welcome alternatives to "mega-plex" model.

While the opening of Bell Lightbox does indeed signal a significant change for Toronto's cineastes, TIFF director and CEO Piers Handling has gone on record as saying he hopes that the new screening facilities will inspire and encourage Torontonians to seek out non-commercial cinematic fare all over the city. And with the creation of a complex dedicated to the preservation of film rather than one privy to the whims of an ever-fickle commercial audience, Toronto may finally have a permanent home for its film culture.

Writing by JP Larocque. Additional material from the City of Toronto Archives and Peter Morris' "Embattled Shadows: A History of Canadian Cinema, 1895-1939" (McGill-Queen's University Press 1978), and the Archives of Ontario. Bell Lightbox photo by Canmark on Flickr.