TIFF gets political this week for the Human Rights Watch International Film Festival, on from February 24 through March 6, 2010. Every year at about this time, TIFF Cinematheque teams up with a folks from the Human Rights Watch Canada Committee to provide an opportunity for activists and film buffs engage with hard-hitting films.

To sum up what's on for the eleven day run, lemme just say that when I threw on the first preview DVD, I hoped to learn a few things about global justice, social change, women's rights, etc. And I did. But a few movies later, I was blubbering away watching Afghan kids come through a hospital - to have wounds dressed and limbs amputated because they'd brought home landmines to play with (in Back Home Tomorrow). 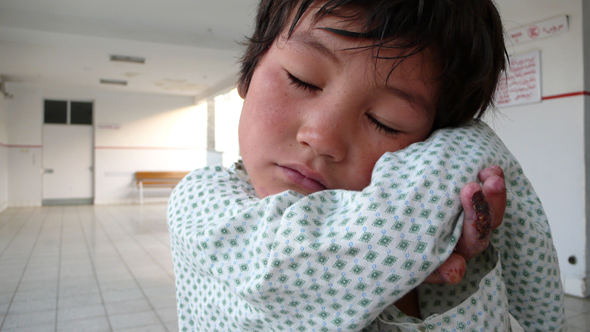 Headlining this year's fest is Last Train Home, a recent Sundance selection from the producers of Up the Yangtze. The doc, by Chinese-Canadian Lixin Fan, is about millions of Chinese workers returning home to celebrate New Year's and examines issues around this migrant lifestyle. Last Train Home premieres at the Isabel Bader Theatre on February 24 (with the remainder of the festival taking place at Jackman Hall) and will go on to a theatrical release in Toronto later this week.

Backyard (March 3) is a fictional story, based on the fact that women are murdered so often in JuĂÂĄrez, Mexico, that the unsolved crimes have become an accepted norm. In the film, a tough but compassionate officer named Blanca Bravo has been sent in from Mexico City to investigate hundreds and hundreds of cases. Can this sort of thing really be happening in North America?

A surprising favourite for me is an explosive doc called Be Like Others (Feb 26) looking at transsexuals in Iran. Specifically, Be Like Others examines a society where sex-change operations are accepted under Islamic law, while homosexuality is punishable by death. Most of the interviews focus on a liberal doctor and his patients lining up for the operation, with the suggestion that some gay men are taking this extreme measure just to conform to the law.

Stills from Presumed Guilty and Back Home Tomorrow courtesy of TIFF Cinematheque.