The Demise of the Gerrard Cinema

Still, it seemed like the perfect occasion to attend an authentic Bollywood screening had presented itself.

Or maybe not. Later that night, I popped by hoping to stumble into a line up around the corner, but instead I found an empty theatre and a guy moving stuff around in the lobby... and thus another local movie house on the brink of closure, this time on the East side of Jones at Gerrard.

With the closing of the Carlton in mind (this weekend!), I pretty much invite myself in. After all, this was likely to be my last chance to see the inside of the Gerrard. 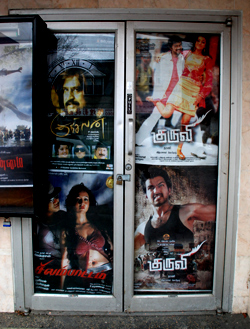 The area, which is not quite Little India, has seen better days. On the 1000 block of Gerrard, a few too many stores are boarded up, and some of the cinema's neighbouring businesses include odds and ends like a Western Union, a salon called Youngr [sic] Hair Design, and a "business consulting" shop.

At first glance, a well-stocked fridge in the lobby seemed promising. But as I ventured into the screening space, under the bright overhead light, I couldn't guess as to how you could fill such a large, rundown space.

My unofficial guide (the guy cleaning up the place) wasn't sure what the owner planned to do with the venue, but explained that the theatre hadn't been operating for a while --that patrons have moved on to (what I am guessing are bootleg) DVDs on sale up the street for a dollar or two.

It was surprisingly difficult to dig up photos and stories about the Gerrard, even though it's been operating as a cinema (on and off) since 1933. A search through the files at the Urban Affairs Library generated only movie listings and a brief mention in a book about Toronto cinemas (yep there is one!) The Nabes: Toronto's Wonderful Neighborhood Movie Houses. Back in the day, the space had been called the Wellington, the Bonita, possibly the Athenian, and like many of the older theatres in the city, it might have also been a porn house on a few occasions. More recently, as the Sri Lakshmi and the Gerrard, it showed South Asian films.

The night wasn't a complete bust, mind you. I had recruited a friend with the promise of a stop at the Lahore Tikka House nearby. And, the exceptionally nice guy showing us around let me walk off with a a couple of reels, a piece of the folding cinema that will soon decorate my livingroom wall.

In other movie theatre closing news, the Carlton is commemorating its last weekend with multiple screenings of the hilarious medieval spoof, Monty Python and the Holy Grail. The film was on, management tells me, during the multiplex's opening weekend in 1981. Screenings are on December 4th, 5th, and 6th at 2:00, 4:30, 7:00, 9:30. For anyone looking to relive those nostalgic teenage make-out sessions or see one last film in theatre this weekend, here's a link to the Carlton's schedule.