8 Short Films to Watch at TIFF

A few days ago, we reported that John Greyson had pulled his short Covered from this year's TIFF lineup in protest against the festival's City-to-City spotlight on Tel Aviv. So what else is left in TIFF's Short Cuts Canada Programme? Well, a good showcase of 40 or so films, flush with emerging and established talent from all over the country.

Short Cuts is like a fest within The Fest, running five full programmes and pairing some odds and ends (each under 50 minutes in length) with screenings of Canadian features. Thrillers, dark comedies, and the latest from animation guru Cordell Barker top my list of standouts in this year's set.

The Armoire (Jamie Travis, 22 min.)
Rich with mystery and dead-on early '90s set design, The Armoire centers on a young boy whose best friend has just gone missing. Through his eyes, a dark childhood tale unfolds as we watch the chain of events from a hide-and-seek game gone awry. Please give Jamie some money to make a feature - this is one of the strongest entries in all of TIFF that I've previewed to date. (Short Cuts Canada Programme 4)

5 Dysfunctional People in a Car (Pat Mills, 5 min.)
Michelle, Jake, Nancy, Christina, and "Grandma" are five dysfunctional people in a car. Curiously absent from the film's title is Grandma's bitter and angry little dog David, also along for the ride. (with Gun to the Head) 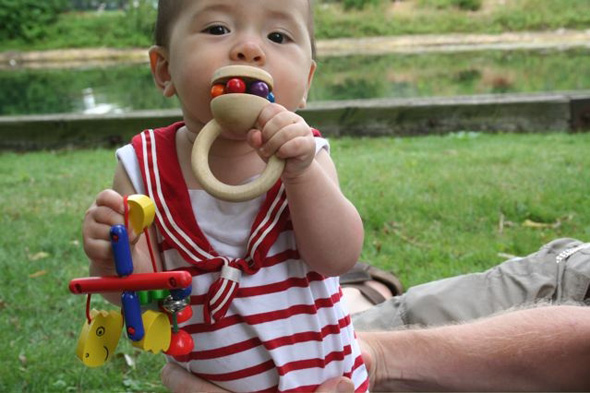 My Toxic Baby (Min Sook Lee, 45 min.)
Lauded local doc-maker Min Sook Lee returns with a very personal exploration of the toxic hazards in her infant daughter's environment (and possible ways of reducing them). What struck me about Lee's angle is her realistic investigation of the various "alternative" parenting options: she dares to consider the costs involved and whether it would be practical for her to implement them with her own family. (Short Cuts Canada Programme 1)

Runaway (Cordell Barker, 9 min.)
Fans of The Cat Came Back and Strange Invaders are in for a treat - NFB star animator Cordell Barker is back with Runaway, a crazy wreck of a crowded train ride. As if I needed more reasons to be excited about this film, the journey is accompanied by the music of Ben Charest who composed the score for The Triplets of Belleville. (Short Cuts Canada Programme 3)

Snow Hides the Shade of Fig Trees (Samer Najari, 21 min.)
A vanload of recent immigrants spend a long day delivering flyers in Montreal. They share stories and complain about the cold, and are briefly distracted by a peculiar new guy from Russia. (Short Cuts Canada Programme 2)

Unlocked (Mio Adilman, 15 min.)
Shot down the street from my house and capturing some of the frustration of being a cyclist in Toronto, Unlocked is too familiar. Having his bike double-locked by other cyclists wears down the hero in this story until an emotional breakdown seems inevitable.

Stills from The Armoire and My Toxic Baby courtesy of TIFF.