Bring out your dead!

The Toronto After Dark Film Festival hosted a zombie appreciation night at The Bloor Cinema last night, with back-to-back screenings of Dead Snow and The Revenant.

Tickets were half price for those who dressed up as zombies. This encouraged about a third of the audience to put on their best blood and gore. Or, as in the case with the elaborately adorned "Yorkville 18th Century" zombie couple, Connie Williams, 34, and Toby Link, 34, from Burlington (pictured above), their best silver frocks. 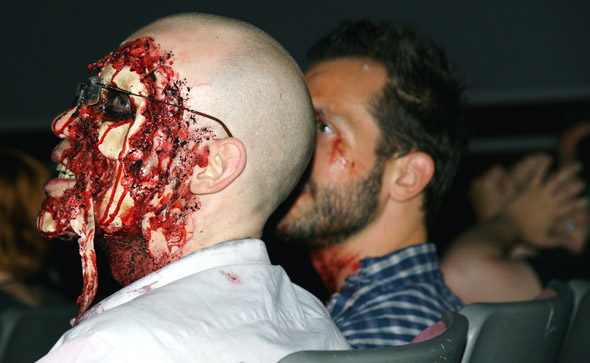 I missed the first screening of Dead Snow, which sold out. Not surprising, considering the subject matter. But is it Zombie Nazis or Nazi Zombies? 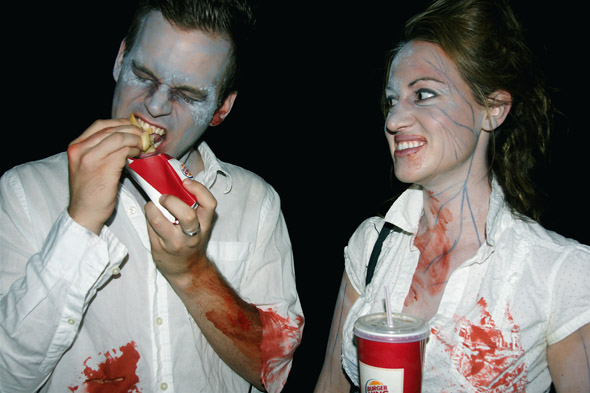 I met a few frolicking zombies in the lineup before The Revenant was let in. Among them, a couple who were just finishing devouring some Burger King: Jason Baskey, 29, and Emily Buller, 28, both from Toronto. 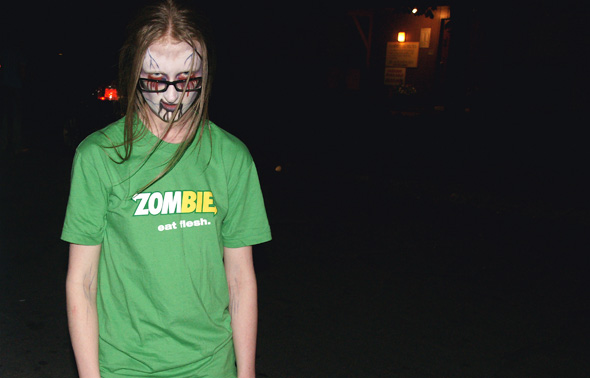 I was a little creeped out by this renegade Subway employee gone wild. 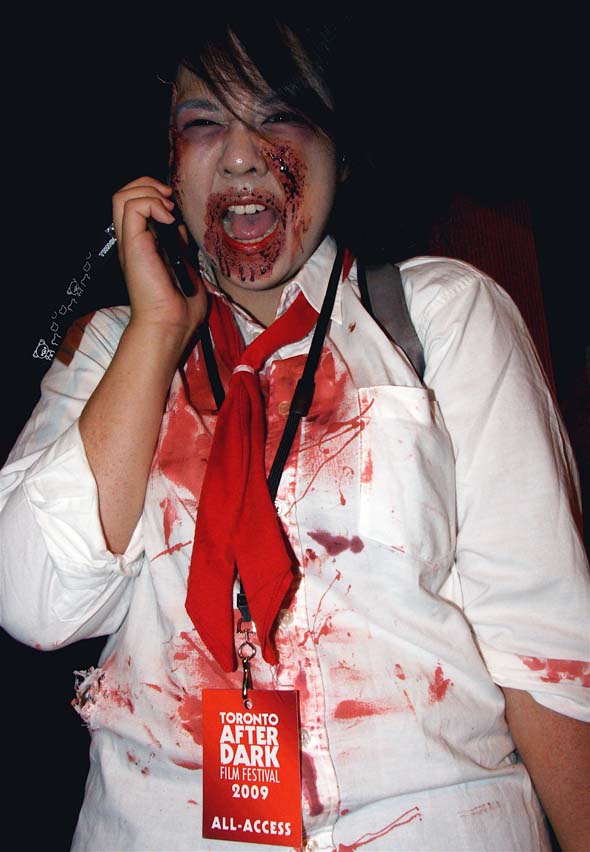 Many of the fans of the film festival took pains to put their outfits together. Some quite literally so. 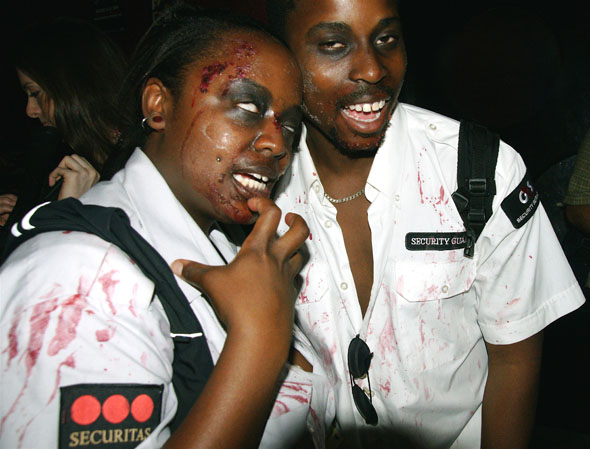 It was good to see that security was on hand in the Bloor Cinema lobby. Although I think they'd already got bitten. 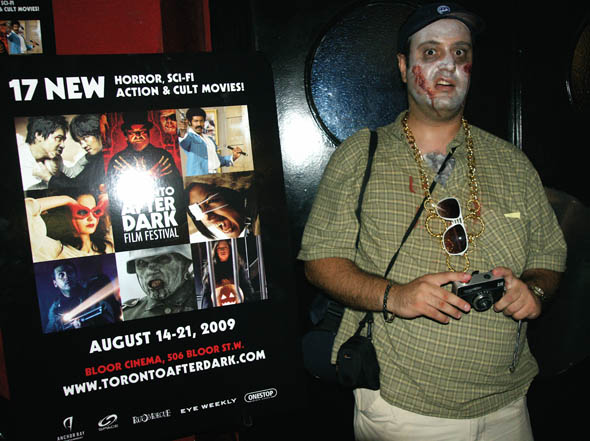 Even a tourist or two was in attendance. And The Coca-Cola Kid was back with a vengeance. 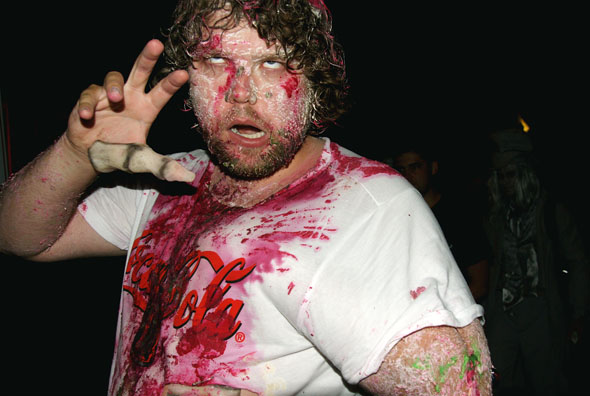 Dave Baruch, 26, from Mississauga (pictured above) is a man obsessed possessed. 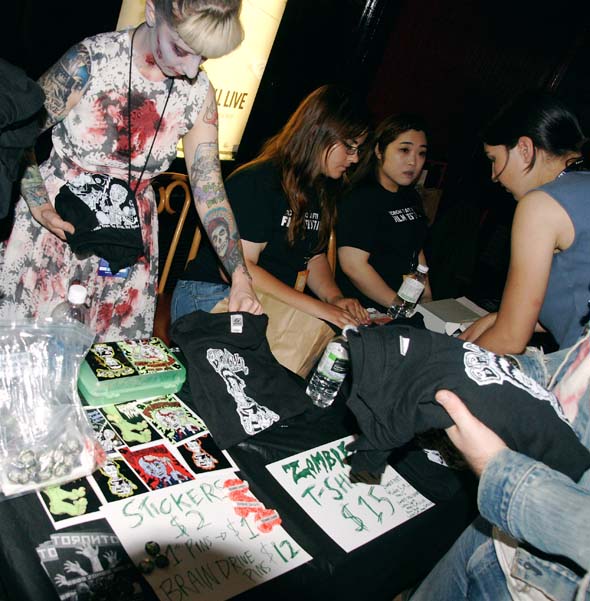 Lots of zombie swag was to be had, including t-shirts, stickers and realistic looking "Brain Drive" pins. 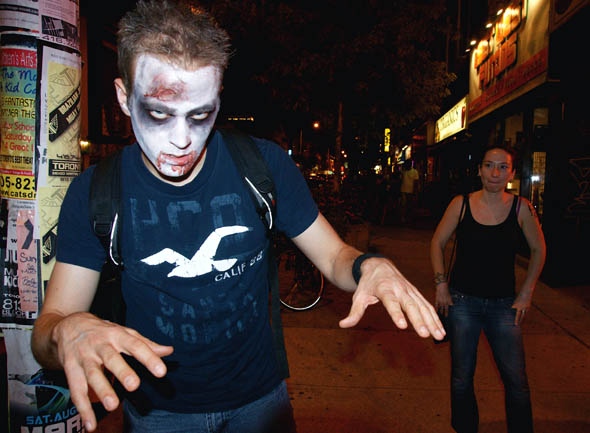 I found The Revenant quite amusing. It was definitely worth seeing this international premiere. Especially surrounded by a motley bunch of eager, bloodthirsty zombies.

If you're a fan of Shaun of the Dead, Fido, or Black Sheep, you'll appreciate this zomedy.

The Toronto After Dark Film Festival continues until August 21. Tonight, catch Vampire Girl Vs. Grankenstein Gir at 7 p.m. and Strigoi at 9:30 p.m. Tickets can be purchased in advance at the TADFF website for $12 each ($10 students) or at the Bloor Cinema box office.

And if you missed last night's zombie appreciation night and still want to ooze blood in public, there's the Toronto Zombie Walk: Special Director's Cut Edition coming up on Sept. 12 during the Toronto International Film Festival.

View the complete photo set in this mini photo slideshow: