Crashing the Metro Theatre for some Adult Entertainment

Toronto's (historic) Metro Theatre has had a "For Sale" sign on it for as long as I can remember. Faded images of women in lingerie on its faรงade promise "quality entertainment for adults", an unusual sight next door to the PAT supermarket in Koreatown.

Ever wonder what goes on behind those doors? I went in to find out, while I still had the chance.

I recruited a male friend to escort me that night, in fear that some perv would do I-don't-know-what to me if I was there alone. I was definitely stepping out of my comfort zone. We circled around Bloor and Clinton for a while before going in. I'm not sure if we were nervous or if we were scoping out the area to make sure no one we knew would see us there. It was probably a bit of both. 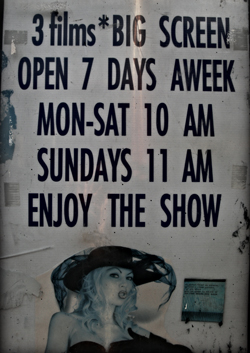 The ticketer moved to the concession stand to sell us goodies. Unappealing packaged deserts and pop cans were the only options on hand, so I opted for a Kit Kat from the vending machine.

At this point, I was very aware of a scent in the air (musty? uriny?). I noticed there was a $1 coat check. A couple of older men were sitting around, quietly drinking coffee in the lobby.

The screening room was larger than expected, seating 275 according to the Metro's website. After our eyes adjusted, my friend counted six or seven people. I could make out some large chandeliers and fans on the ceiling (no air-conditioning here). There are bright multicoloured exit lights, illuminating a path so that patrons have the option of leaving discretely from the back of the theatre.

Here's where it got weird: men seemed to be roaming the aisles, and some were sitting closer and closer, across and behind us. It made me uncomfortable and (sadly) confirmed that women should probably not venture in alone.

The swarming creeped us out enough to leave. Using a passcode number stamped on our tickets, we opened a locked door to go upstairs to the second theatre (I think we might have gotten a freebie premium). This must have been the balcony back in the day (the Metro dates back to 1938). The seats have velvet cushions and squeak, and movie legends like Chaplin and Julie Andrews (in a scene from Mary Poppins) are painted on the walls. Best of all, no one was there.

REMAX is listing the property at $3.5 million, noting its "potential for redevelopment, great retail area, high traffic and very vibrant surrounded by dense, pricey residential pockets." For the brave seeking an adventure in the city, get in before it becomes a hair salon.