With a lackluster selection of mainstream movies opening in Toronto this weekend, the only reason I would go to a multiplex theatre is to cool off in the excessive air conditioning. The Parkdale Film and Video Showcase is easily one of the best alternatives - the longtime artists' hub celebrates its talented residents with a $pwyc festival of short films, videos & projections.

There will be two nights of screenings: short films and videos at 9pm tonight followed by Roberto Ariganello's home movie collection at the Revue Cinema, plus an outdoor screening of more shorts in the Fuller Avenue parkette (north of Queen, west of Lansdowne) at 9pm on Saturday, June 27th, closing with Christina Zeidler's Show Me Yours: Nassau, at 10pm. 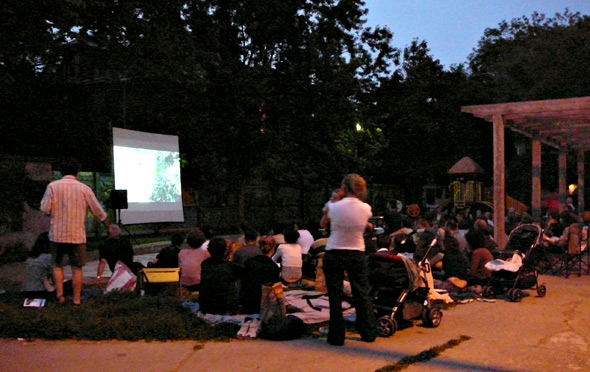 Show Me Yours: Nassau is the latest in a series of films Zeidler started working on with a commission for the Queen West Arts Crawl. Zeidler tells me the idea came about when she was invited to participate in the event, "I thought it would be a good celebration of the area and the artists who live in it if I made a collaborative film in which we made a portrait of Queen West." She ended up making three: Queen St. By Numbers, House Call, and finally Show Me Yours: Toronto, where she asked 50 artists to show her their favourite spot in the west end.

Zeidler was curious to see if the idea would work outside of Toronto. So, she took the Show Me Yours concept to Nassau a few months ago, and once again asked 57 Bahamian artists to take her to their favourite or "secret" spot (and then edited the segments into the 57 minute video screening this weekend). For Zeidler, it was an opportunity to spent time in a different artistic community and to get a glimpse of how artists view the city they live in, a project she would like to take to other cities all over the world.