Quickly becoming one of my favourite film events, Canada Screens hosts a monthly preview for upcoming Canadian theatrical releases at the Drake Underground. The latest, a screening of Ingrid Veninger and Simon Reynolds' Only, drew in a cozy and enthusiastic crowd, for a sunny afternoon.

The low-key film, set in Parry Sound, follows a pair of 12-year-olds spending an afternoon together. Daniel (Jacob Switzer) is lonely and uninterested in his parents' small town motel and Vera (Elena Hudgins Lyle) is passing through with her dysfunctional family. Fresh from touring the festival circuit, this sincere coming of age story has been well received by critics internationally.

Following the screening, a panel discussion on "Making Great Films with Low Budgets" gave me an appreciation for local producer/actor/director Ingrid Veninger's challenges in making this film. For example, I discovered that it cost twice as much to market Only than what it cost to make it, and that everyone who worked on the film was paid exactly $100. 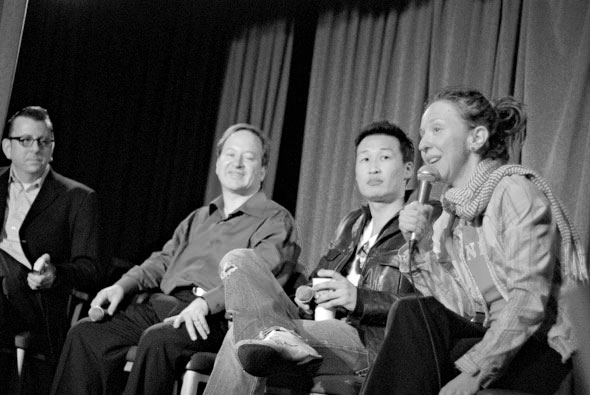 Also on the panel, Dan Lyon, Telefilm Canada's Feature Film Unit Director (Ontario and Nunavut), assured the audience that plenty of great Canadian features are in the pipeline, to be released in the next 18 months.

Canada Screens provides grassroots support for Canadian cinema, working with distributors, publicists, hosts, volunteers, and sponsors to generate some word-of-mouth buzz on movies coming out. Also known as the First Weekend Club, the organization hopes to increase the number of Canadian movies showing in theatres (now less than 3% in English Canada).

Ticket sales from this event will go towards Only's weekend box office results, and a solid opening could help secure a longer run for the film.

Only screens from April 24th to April 28th at The Royal Cinema. Sign up to the First Weekend Club for invitations to Canada Screens events.

Still from Only (above), panel photographed by Chandra Menard.