This Saturday, guerrilla filmmakers Spasic and McNulty unleash their dark comedy/psycho killer movie, Street Freak. Shot all over Toronto, the story centers on nice guy Cory (Dylan Crewe-Young), whose friends are being killed off one by one by a menacing masked Street Freak.

"The film," McNulty tells me, "actually started out as a side project for us...meaning that we were bored one night and decided to shoot a horror scene with no script or plot in mind. When the scene was finished, we were so happy and excited about it that we decided to shoot another one. After showing a few people, everybody seemed to want to see more...so I sat down and banged off a script, thus beginning the 7 month adventure of creating Street Freak."

Meet Patrick McNulty and Tosha Spasic. They have been making movies and writing stories for as long as Patrick can remember. "We write together, we edit together, we act and rehearse together, and after years of forcing our friends to act in our videos, we inadvertently created a team of loyal actors who volunteer countless hours of their time to be a part of our shenanigans." 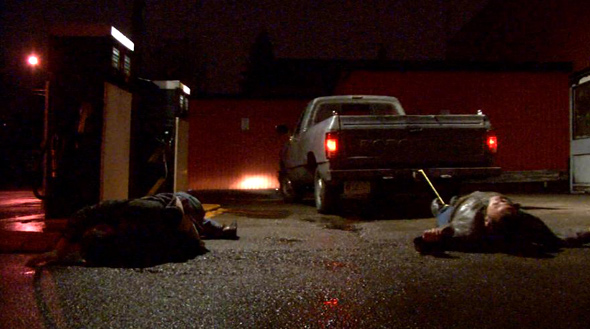 Citing Robert Rodriguez as their main influence (check out his 10 minute film school), McNulty and Spasic "shoot everything guerrilla style" according to Patrick.

"I have become an expert at talking my way out of trouble with the police! I'm pretty sure a few of them know me by name by now..."

As an example, he offered that while they were shooting a scene of a dead body being dragged by a pickup truck for Street Freak, they had a lot of explaining to do when a cruiser pulled them over - "the truck we were driving had no insurance, my license was suspended, and the "dead body" was not a prop...it was a stunt guy."

You've gotta love that Toronto has been used as a backdrop for so many horror movies. I asked Patrick if he and Tosha have any favorite places to shoot in the city - "anywhere we can get away with it! But if we had to choose we would say Pearson Airport is pretty fun..."

After sorting through the stills (many of which had a creepy clown), I called Patrick for his assurance that I would still be able sleep tonight if I watched the screener. As promised, the gore was minimal, the characters were charming, the dialogue was quite funny, and, the murderous Street Freak was much too bizarre-looking to be scary.

The World Premiere of Street Freak is on Saturday, February 7th at the Bloor Cinema. Stills courtesy of The Shenanigan Clan.