While Superbowl parties dominated last Sunday afternoon, I took in a party of a different sort at The Drake Hotel Underground, thrown by First Weekend Club.

The gathering started with a performance by Zaki Ibrahim, one of the talented musicians featured in the film screening that followed: NURSE.FIGHTER.BOY.

The film is an urban love story directed by Toronto filmmaker Charles Officer and featuring actor Clark Johnson and Karen LeBlanc. It's a quiet, enchanting little film that slowly draws you into its magic world of Jude, Silence and Ciel, the three characters that also make up movie's title. 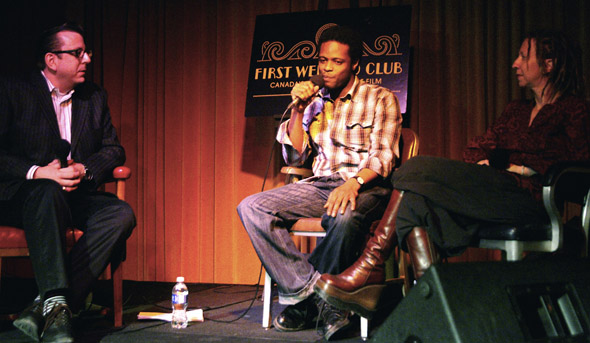 The soundtrack really carries the film. Other artists that help set the mood of various scenes include the little-known South African group Tumi and the volume, as well as Torontonian K'naan.

An enlightening Q&A followed the film, featuring Officer and writer/producer Ingrid Veninger. Officer spoke about his desire to "inject some real heart and soul in film," which was clearly evident in this, his feature directing debut.

After the Q&A, I chatted up Officer about his next projects, which include a drama he's doing with Mongrel Media. "I'm also working on a documentary about a little-known African-Canadian sprinter named Harry Jerome," said Officer. "He was around way before Ben Johnson and Carl Lewis."

I encourage you to go see NURSE.FIGHTER.BOY this weekend when it opens in Toronto at AMC Yonge-Dundas and at The Royal.