It's incredible what you can find at the back of a thrift store in Mississauga. A beaten up Dan Brown novel...a set of glow in the dark forks...'Men in Black' on VHS...or an old answering machine tape. Alison Kobayashi found an answering machine tape that had belonged to a man named 'Dan Carter'...it changed her life forever.

"The 'Dan Carter' tape was the first one I found. After that it became compulsive; I'd just go to one thrift store after another and take all the tapes from the machines. I was just so surprised no one would erase them."

A native Mississaugan, Alison now resides in the west end of Toronto. After dabbling in theatre through High School, she decided to enroll in University as a communications major.

"I took a silk screening class as an elective one year, and my professor convinced me to switch into fine art. I went from learning about the historic significance of the printing press to working on one"

In 2006 she turned the thrift store tape into a video project. 'Dan Carter' is structured around the messages left to Dan by his saucy lover, his social worker, and his neglected children. Alison plays all the characters and lip-syncs their suburban drawls into the camera; it's a bravura performance. She has chameleon-like ability to slip into other peoples skin; after seeing it the first time I couldn't surmise if Alison was male or female.

'Dan Carter' was followed by another film festival hit, 'From Alex to Alex'. Based on a letter she found on a QEW overpass, it tells the story of a 'mostly gay' fourteen year old who's fallen for another person in their class named Alex.

"It was folded up and it just said 'From Alex to Alex' on the front; I love the gender ambiguity of the names. One person I showed it to was convinced it was about two lesbians, but I interpreted it as being about two boys. The things that set me off was a line about giving head, the shame the author feels, the handwriting."

Alison doesn't use a crew on her motion pictures; she does everything herself. A self-styled 'control freak', it's incredible what she's been able to pull off on her own.

"When you work with other people, it's just so planned. There's a zoom in 'From Alex to Alex' that was done by a six year old; I couldn't do it because I was on camera. If you see a painting, you don't ask 'who painted that with you?' It's a visual art mentality."

She's working on a new video now; though this one decidedly fictional. Her obsession with thrift stores has waned; if she finds another story on a scrap of loose paper it'll be purely accidental.

"I don't want to be that girl who just works with found objects. If I stayed with silk screening I never would have done the films. There's a lot of pressure for artists to do the same thing that audiences have reacted to strongly before; I want to challenge myself." 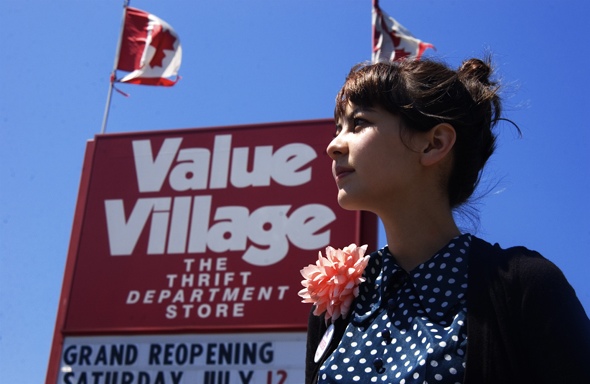