After trudging through the Toronto Eaton Centre, trying to avoid the throngs of teens, tourists and trash, I emerge at the intersection of Yonge and Dundas to a visual assault.

Billboards up to the sky greet me with their gaudy, flashy welcome. There's already a multiplicity of megaplexes in our city. Why not have another one in the downtown core, right beside the concrete eyesore that is Yonge-Dundas Square?

It's debatable that we need a new movie theatre at this corner now. Look what it's replacing? One that had closed after years of poor attendance and neglect.

Given the poor turnout on day one, I wonder how long until this new megaplex suffers the same fate. Do we really need to be inundated with a 24-theatre venue?

Quantity over quality may very well be its death knell. We'll see how they plan to attract and retain customers.... 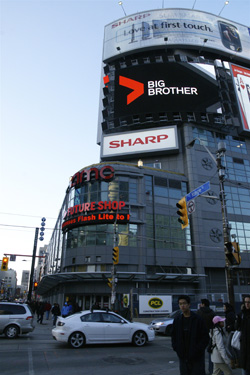 I wade past the Spiderman chalk drawing and the busking noise-maker and cross the street twice to reach the north-east corner.

Heading east a few doors over and I'm inside The Future Shop entrance where the ticket line-up should be.

In spite of having a well-circulated email FREE MOVIE PASS, there are no line-ups on a Saturday afternoon around 6 p.m.

I get to skip past the long, winding truncheons to one of the ticket booths where an absent-minded teenager gives me tickets to the 4:05 p.m. show of Martian Child.

Given the next show is at 7:05 p.m I have to go back and have him initial the ticket again, just in case another dimwitted drone happens to notice.

I've got about an hour to kill and I'm getting peckish, so I go back outside and ponder the possibilities in the area. No need to get gouged at the concession stands with so many other options available.

Even without line-ups, it takes a good five minutes to mount at least three escalators to get to theatre number 19.

About half-way up I see a sea of chairs and tables cordoned off in what appears to be a future food court. A sole security guard slumps over one of the tables as its only occupant. 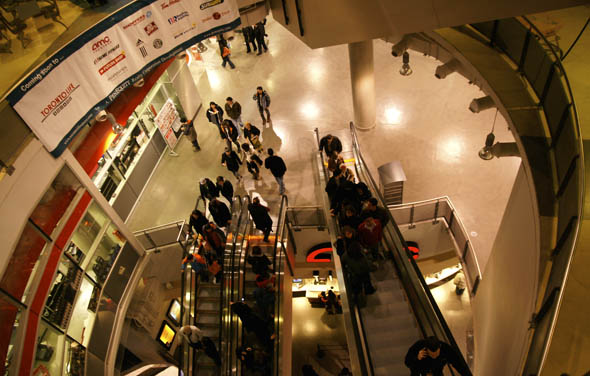 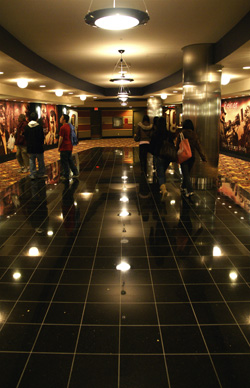 The area just outside the movie entrances is a spacious oval with high ceilings, adorned with panels of larger-than-life images of moviestars, giving the place a sense of grandeur.

Perhaps a little classier than the Para... er, Scotiabank Theatre in the entertainment district, but not by much.

The theatre itself boasts an "all digital presentation," with more than four times the resolution of HDTV. They've got nearly 5,000 seats to fill. It had better be good.

While the experience watching the cute Martian Child was adequate, I'll have to test out the bigger experience with a different movie.

With 18 films to choose from, none of them were really appealing. Maybe Alien vs. Predator 2 or I am Legend will make this experience worthwhile.

If you've got three friends and a few hours to waste, you'd better line up with those passes tonight or tomorrow, as the price goes up to $13 a regular adult ticket after Monday.

If this is still not your cup o' tea, wait until Wednesday, when you can catch Up the Yangtze at The Royal cinema for free, courtesy of CBC.