Last Thursday, I gathered at The Gathering Space (shared space with Cool Hand of a Girl) to sit and watch 8mm, Super-8 and 16mm home movies. Not my own home movies, other people's. Complete strangers in fact.

That may sound like a pretty terrible way to spend an evening, but it wasn't. I've had many painful moments watching home movies with people I know and love, so how is it I could so enjoy a night of this with strangers?

Find out after the break. Plus, more photos and information on upcoming screenings.

Truth is, I'm not sure why I enjoyed it so much. I don't think I entirely appreciated the value of home movies before hearing other people talk about theirs and watching them on a big white screen. Home movies are part social commentary, part historical record and in a certain way, part artistic expression. No matter what family they document, old films are at the same time unfamiliar and entirely familiar. Moving pictures of strangers have an ability to evoke empathy, reveal the human condition, bring joy.... or maybe it's simply fun to laugh at others' embarrassing families instead of your own. 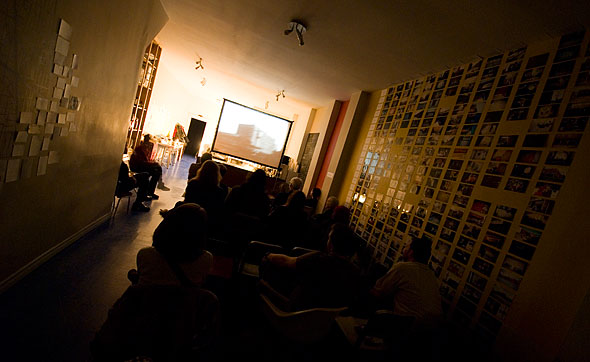 Let me give an example of why the night was so intriguing. One woman brought in a film from her parents wedding day in Toronto, November 1959, a film she had only recently found and only once viewed. Without sound, we were narrated through the movie by her memories of people/places and memories of family members memories told to her over the years. From silent color footage of people we didn't know came people we recognized in our own family, stories and pictures not unlike narrative in our own history. Even more palpable was the dramatic irony. How would this couple ever know one day almost fifty years later the omniscient narrator of their film would be their child, and that she would be telling us the fate of so many of those on screen. Mixed with the occasional "I'm not sure who that is," her family narrative was slowly revealed. We found out that her mother was actually four months pregnant on her wedding day, knew the name of that child and future children, knew that her father would die only 13 years into the marriage.

The fortunate thing about old films on reels is that they are never very long, usually only a couple minutes. The painful thing about old VHS video cameras was their never-endingness.

Other movies showed trips to Mexico, Florida, Vancouver. John Porter showed the second film he ever made on a canoe trip in the 70's. 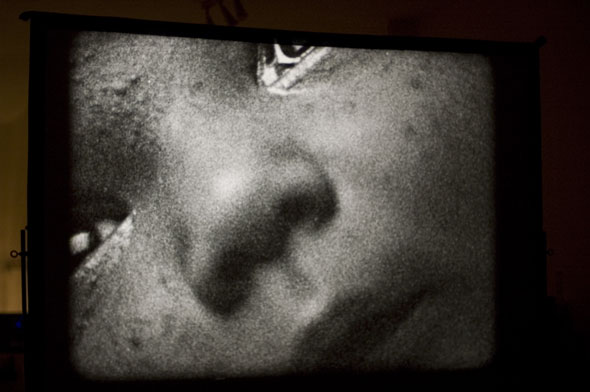 Another highlight of the evening was home movies by Junction filmmaker John Price. These weren't exactly home movies, but more extremely beautiful and experimental films of his children and family (still photo from movie pictured above). Spectacular films.

Turns out there is a whole community of people who collect and screen 8mm, Super-8 and 16mm films. When I say collect, I mean actively search through garage sales and flea markets looking for old abandoned home movies.

Also, for those interested in 8mm and super 8 films, this February 22-23 there will be a new film festival for Small-Gauge films at Trash Palace, Bathurst & Niagara. The 8 Fest will "feature everything from historic works by international artists to contemporary pieces from the Toronto film scene." The festival "will also highlight the wider cultural use of Small-Gauge - from home movies to instructional loop films, a grassroots glimpse at 70 years of everyday culture." To get the schedule e-mailed to you, send a message to the8fest@gmail.com with "Subscribe" in the subject line. 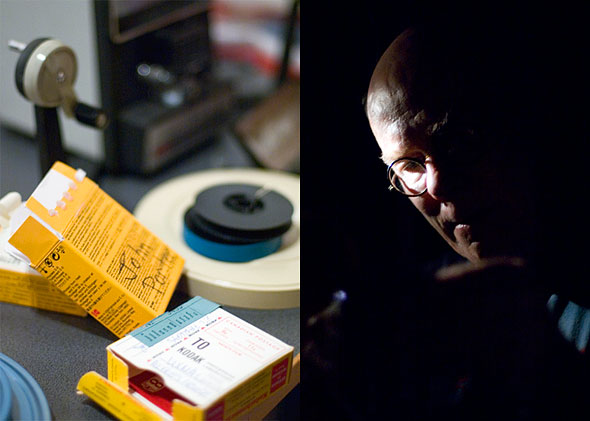