Reel Asian: What to See (and What Not to See)

The Toronto Reel Asian Film Festival kicks off tonight with Justin Lin's mock-doc Finishing the Game. Stars Rogers Fan and Dustin Nguyen will be in attendance.

Curious about what to check out at the fest? I got your reviews after the jump.

Similar to Wong Kar Wai's Happy Together sans the barrage of splashy and indulgent stylizations. This tale of two male lovers is told with a sense of gritty realism that may be troubling to some. The stark examination of the Korean working class has a distinctly Ken Loach quality about it, but it's the blindsiding climax and conclusion that makes this film memorable. 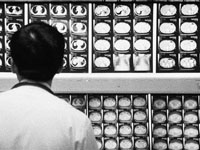 The story contained within this Taiwanese-American doc about death and bereavement is genuinely powerful and humane, yet requires a bit of heavy lifting on the part of the viewer. Generally, I am fine with this and, more often than not, I welcome such challenge. However, this somber, colourless (literally and figuratively speaking) film tends to deviate from its emotional core, too far and too often for me to invest my emotions.

Owl and the Sparrow

Three lonely, forlorn souls connect in this lovely Vietnamese drama about discovering hope in the most unexpected circumstances. The beautiful Cat Ly (Journey from the Fall) -- and let me be the first to call her the Asian Juliette Binoche -- radiates as a lovesick flight attendant. Alas, the film does get a bit sentimental and somewhat predictable towards the end, but the heartstrings it tugs feel so achingly good.

The American Dream is reflected through the brilliant but disillusioned mind of a young Chinese student, who tragically succumbs to the crushing pressures of expectations, academia, and cultural displacement. Smart writing -- which is based on a true story -- and fine acting by Ye Liu (Lan yu) and Meryl Streep carry this drama to its violent but inevitable conclusion.

Cheap-looking and poorly directed, this Canadian-Filipino supernatural thriller plods aimlessly before offering its big tame scares towards the end. Chances are by that point you're too bored to be scared. The lingering close-ups of pretty face model-actress Phoemela Baranda are its only redeeming facets. For what it's worth, we get plenty of those, probably thanks to the editor who must've tried damn hard to save this tedious mess.

What is it about the clandestine nature of brothels that have fascinated directors as diverse as Bunuel, Malle, and Hou Shou-hsien? This steamy, anachronistic period drama about a courtesan's struggle to ascend the ranks has the similar wild, unabated energy of film by Seijun Suzuki (Branded to Kill, Pistol Opera). With its rich kaleidoscopic visuals and a blaring pop rock soundtrack, it's the tone that truly holds up while the plot, for the most part, plays second fiddle.