We've written a whole lot about Canadian film Amal that will be premiering at the Toronto International Film Festival this coming Wednesday, and rightly so. Mississauga-raised director Richie Mehta's film is wonderfully crafted and marks the beginning of what promises to be a brilliant film-making career.

Though while everyone seems to be focusing on the Mehta's GTA origins, what many often forget is that Amal's star Rupinder Nagra also hails from southern Ontario, and is already one of Canada's most promising actors.

I had the chance to sit down with Nagra earlier this week as ask him a few questions about growing up in Hamilton, acting in India, and coming back to premiere Amal in Toronto.

For us Torontonians, Hamilton might seem an unlikely place to raise a budding actor, but Nagra was bitten by the acting bug early. He recalls being casted in the chorus of his Christmas play in elementary school as being one of the sparks that set him on his path: "I wanted to be one of the wise men, but I ended up being in the chorus singing with a bowtie. Yeah, imagine that: an Indian boy in a bowtie and white shirt. But standing there, I remember clearly thinking, woah, this is awesome. The next year, I went and pitched to my grade four teacher that we should do an Elvis Presley tour." An avid Elvis fan, Nagra and four of his friends toured the kindergarten classes at their school with their Elvis tribute performances: Nagra had found his wings.

Nagra immersed himself in the creative community in Hamilton, and became involved in community and high school theatre. After finishing school, he came to Toronto to study at Second City, and "everything has been snowballing since then." 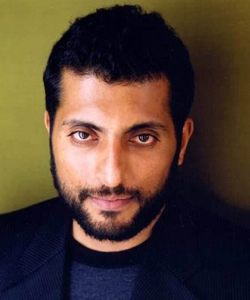 Nagra's performance as a rickshaw driver in Amal is one of the highlights of the film, and Nagra held his own acting alongside some of the greatest Indian actors in our generation: Naseeruddin Shah, Roshan Seth and Seema Biswas. The Canadian actor acknowledges that working with people like Shah was a fantastic learning experience: "It was like taking a master class with some fantastic actors, and I was getting paid for it instead of paying."

While you may not notice it in the film, crowds of fans packed the streets during the shooting of the film in India. "It was amazing how respectful they all were. There were literally hundreds of people standing there, but as soon as the cameras would go on, everyone would be quiet." And while Nagra is on course to become quite the recognizable face in the Canadian film scene, he was still relatively unknown in India: "One day, we had returned to shoot some scenes without Naseer [Shah] and a local rickshaw driver pulled up next to me and asked me how I got the job to drive Naseer around, and who he should talk to so he could get a job like that."

Directed by a GTA native, starring a Canadian, and based on a short story written by Torontonian Shaun Mehta, Amal is a distinctly Canadian film despite being set and shot entirely in India. For Nagra, it was important for the movie to premiere at this year's Toronto International Film Festival: "The big thing about this project is that it had its origins in Toronto. The story, the short film, all started in this city. So it was important to come back and show the film where the whole process and vision began."

So what's next for the talented actor? Nagra, who spends some of his time in India and some in London as well as Toronto, has been offered several scripts he is currently reviewing, and with the debut of Amal later this week, those scripts are bound to keep coming. The Hamilton-native, however, is not only sticking to acting: he will be co-producing a new film with Lee Kim (who produced This Beautiful City at the festival this year) and Spek, formerly of the Toronto alternative rap group The Dream Warriors. Tentatively titled Fricky, the script tells the story of a motorcycle racer in 1970's Sri Lanka and is based on a true story: "the motorcycle rider in the story is actually Spek's uncle! It's a phenomenal story, and set entirely in Sri Lanka, so we'll be shooting the whole thing there." You heard it here first folks. While Nagra is sitting in the producer's chair for this project, I'm hoping we might also see him on screen as an actor in the movie as well, a choice that Nagra himself isn't ruling out just yet.

You can meet Rupinder Nagra, along with the rest of the filmmakers of Amal, at the film's premiere on Thursday night at the Ryerson Theatre. Tell him I say hullo, and make sure he's wearing his blogTO button while he's there. And if you do run into Rupinder during the festival, wish him a happy birthday too.