Justin Bieber fans were in for a treat yesterday and today. Hosting a 2-day pop-up shop at men's contemporary boutique, Nomad (819 Queen Street West), Bieber fans were in full force, with exclusive access to Purpose tour merch and Canadian themed Bieber shirts. Line-ups were snaking around the block, and passersby's didn't shy away from yelling Bieber-related remarks.

While beliebers were eagerly waiting a surprise appearance from Bieber himself, he was a no show - for day one at least. The pop-up is open again today from 11 a.m. to 7 p.m., and anticipation is high he'll make an appearance. 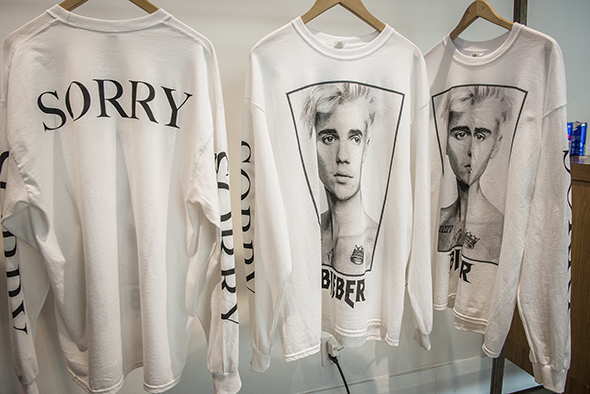 Store owner Jesar Gabino - who has hosted similar events with Drake and The Weekend - tells me "there's a possibility he'll show up tomorrow. We won't know until he literally shows up at that door." 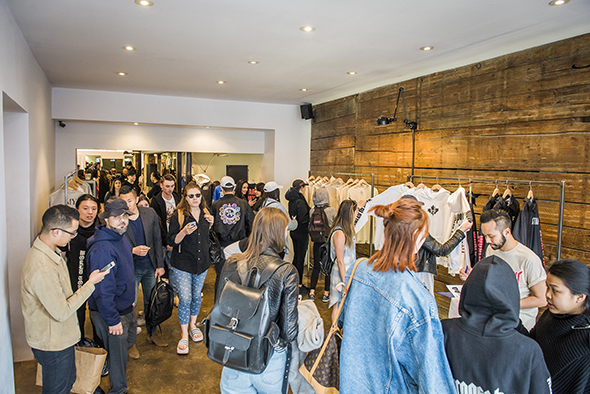 The possibilities are high. Bieber made an appearance a few weeks ago at a similar pop-up store in Manhattan, and one can only assume he'll follow suit on his home turf. 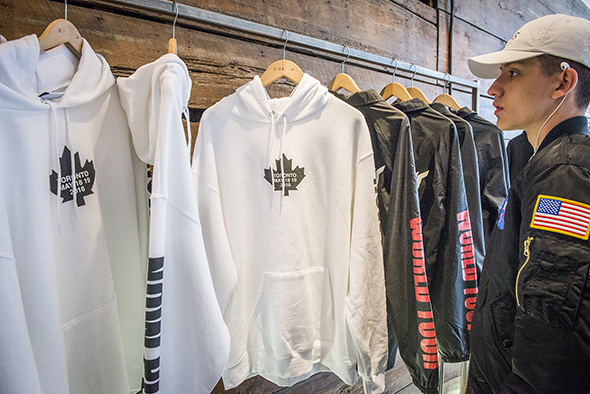 The Purpose tour merch is on point, which can be expected as Jerry Lorenzo of menswear label Fear of God designed the line. There's a variety of long sleeves, tees, crew necks, muscle shirts and jackets ranging from $40 - $100, with Purpose records on sale for $25 (no cover) and $30 (with cover). 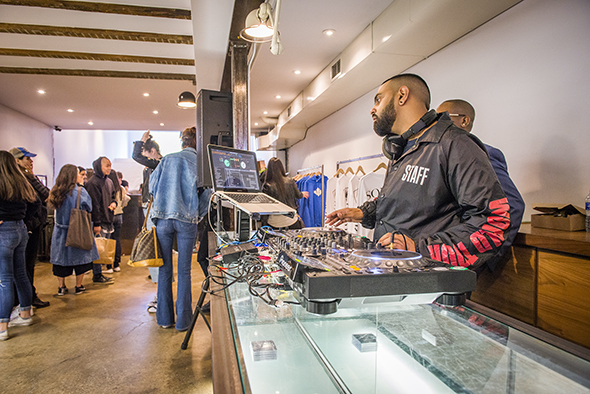 Toronto beliebers can be excited, as the line includes a blue Maple Leafs hoodie ($90), with the Purpose tour date within the white maple leaf on front, and a "6" on the back; one can assume giving kudos to theSix. 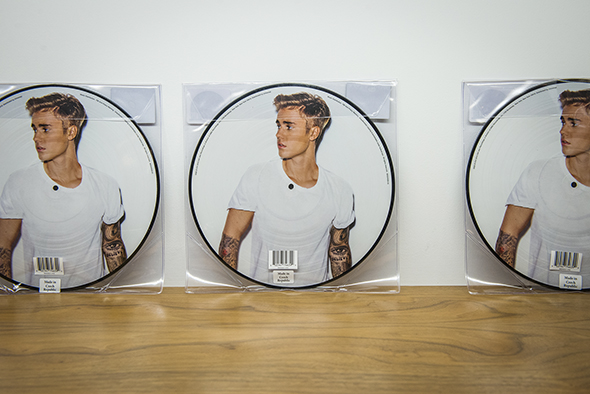 The baseball tee ($65) also dons Canadian influences, with "My Mama Don't Like You" across the front, a red maple leaf below the lyrics and blue sleeves to top it off. There's a white long sleeve ($65) with "Sorry" on the front, down the sleeves, and Bieber's bleach blonde face on the back. 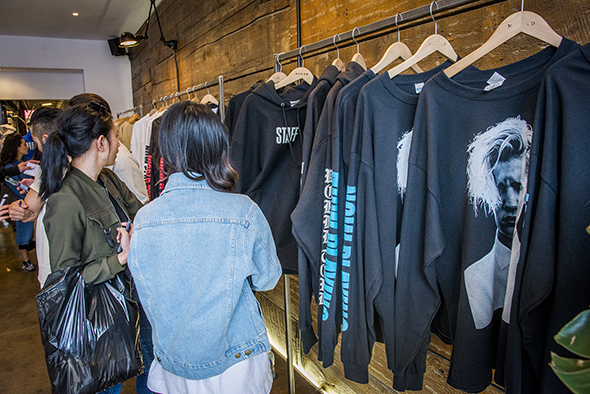 The line itself is a mix of song lyrics, Bieber's face, "Staff" shirts, and heavy-metal inspired fonts reading "Purpose Tour." There's a definite 90's vibe to the line (yes you can get a muscle shirt with "Mark My Words" on the back), with wearable styles that make you want the apparel even if you aren't an avid belieber. 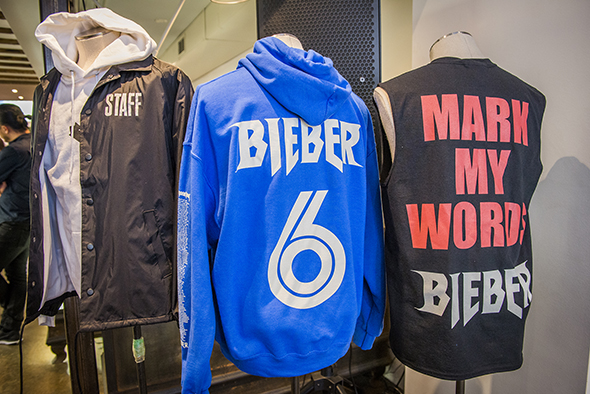 Fans were waiting in line as early as 7 a.m. (with some rumoured to have camped out), but once the shop opened, fans didn't wait longer than an hour to get in. Security issued tickets to ensure the store didn't get overcrowded, and everyone in line was calm, enthusiastic and thrilled to be there. 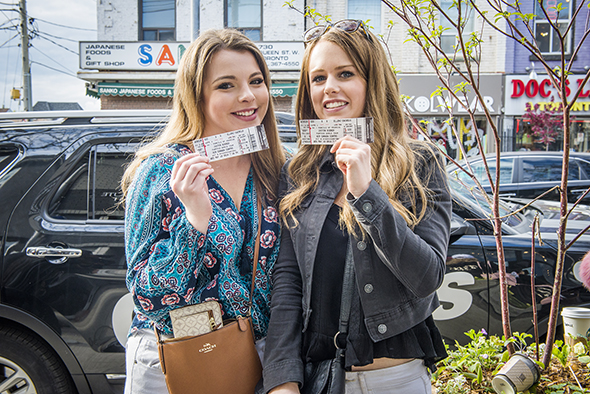 There were a variety of people with tickets to Purpose at the ACC, and some simply wanting in on the merch action (or to snag a glimpse of Bieber.) 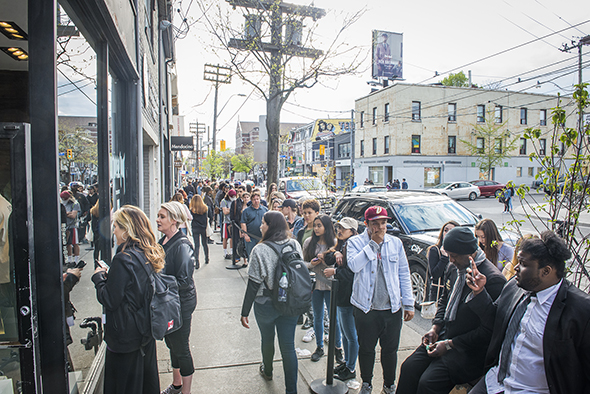 So is Biebs going to make an appearance at Nomad today? Fans can only hope, yet we certainly hope it'll bring him more joy than his set did last night 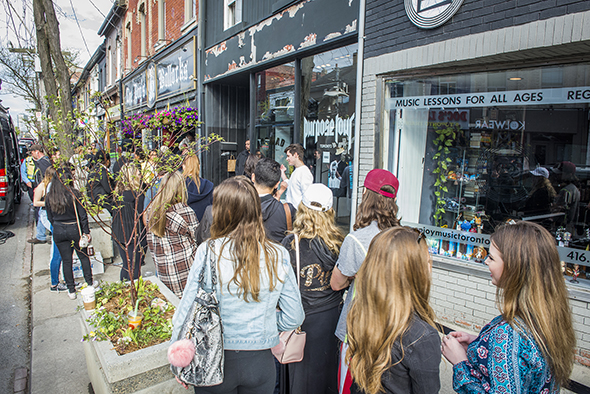