Fans swarm Toronto shop to party with The Weeknd

Last night, press, friends and a select handful of lucky fans attended an exclusive in-store signing with The Weeknd. Held at menswear boutique Nomad, the two-hour event kicked off the R&B singer's North American "The Madness" tour complete with an open bar and hors d'oeuvres.

A line draped in XO gear formed outside the doors two hours before the celebrity appearance as DJ Teddy Fantum spun aggressive hip hop for the increasingly tipsy guests.

Eventually, everyone was instructed to put their phones and cameras away as "The Weeknd would immediately leave if he wasn't photographed by a designated photographer." Security parted the crowd like the Red Sea while everyone eagerly waited.

Although he was slated to arrive much earlier, The Weeknd didn't waltz in until after the event was meant to end. He beelined straight to the middle of the boutique where he spent a grand total of 10 minutes signing fifty boxes of the limited edition vaporizer he launched in collaboration with PAX Vapor. After that, he promptly left the same way he came. 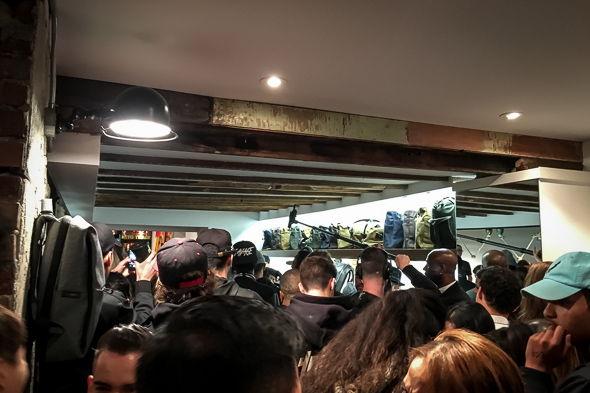 The autographed PAX 2 vaporizers (engraved with an "XO" logo and play the hit single "The Hills" when you turn them on) will be available at Nomad for $420 while supplies last.