Toronto Fashion Week is rearing its glamorous head once again with Fall 2014's presentations. From Monday (March 17) through Friday (March 21), fad-clad industry professionals and Average Joes alike will gather like bees at David Pecaut Square to watch the future of Canadian fashion sweep and sashay down the runway. Though the eccentric street style and diva behaviour forks out enough entertainment value to last the full week, the designers are the main attraction - and this season, the lineup is on fire.

Here are my most anticipated shows to see and why.

Outclass: Wednesday, March 19 @ 4 pm (Studio)
Outclass may have made quite the name in local menswear, but next Wednesday will see the very first of designer Matteo Sgaramella's fashion shows. Known for marrying contemporary silhouettes with heritage aesthetics, the brand's texture-heavy, brightly hued keepsakes will make for a debut you don't want to miss.

Brit Wacher: Friday, March 21 @ 2 pm (Studio)
No stranger to the runway, Brit Wacher is a B.C.-born designer slowly making waves on the east coast. After showing a few collections at Vancouver and Montreal Fashion Week, she's ready to bring her flowing silhouettes, minimal approaches and sharp details to the big(ger) leagues - where I'm almost certain she'll make a killing.

VAWK: Monday, March 17 @ 6 pm (Runway)
VAWK's Sunny Fong, a Project Runway Canada alumni, always rocks the runway with his luxe gowns and sass-packed ensembles. His fall collections also tend to have a little more oomph, brimming with silk and fur and everything in between.

Pink Tartan: Wednesday, March 19 @ 7 pm (Runway)
Season after season, Pink Tartan's Kimberley Newport-Mimran brings white-bread womenswear to the table -- yet her formula seems to be working because everyone keeps coming back for more. No need to fix it if it ain't broke, right?

Joe Fresh: Wednesday, March 19 @ 8 pm (Runway)
Joe Fresh started as a second-string shop-in-a-shop (a.k.a. grocery store) and climbed the ladder to become the biggest name of the week, with the biggest turnout to match. You might be baffled that their run-of-the-mill shift dresses and golf tees attract so much attention, but it's the styling that makes Joseph Mimran a leading lad.

Mackage: Wednesday, March 19 @ 9 pm (Runway)
As a brand that built its empire on leather, Montreal-based Mackage shines the brightest during the fall seasons. That being said, expect no shortage of male and female models layered head-to-toe in animal hides and furs. 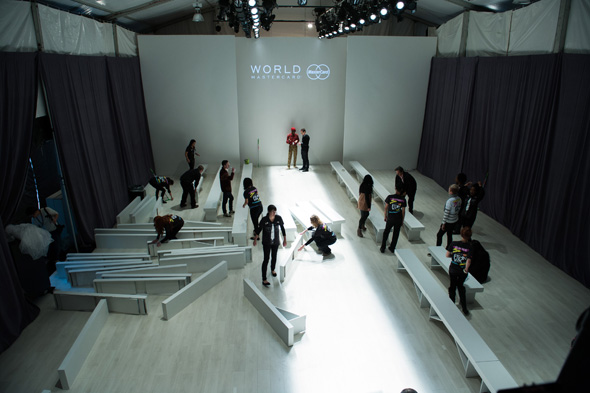 Thomas Bálint: Tuesday, March 18 @ 5 pm (Runway)
The only coherent way to describe a dude who wears Thomas Bálint is "starving artist/farmer in impeccably tailored outerwear." I can almost guarantee the first two minutes of next week's show will solidify this concept.

Matthew Gallagher: Friday, March 21 @ 8 pm (Runway)
Like most of The Collections' designers, Matthew Gallagher's eponymous label is rooted in minimalism, elegance, and luxury; it's his tasteful use of colour that sets him apart from the rest. Although the pressure's on to end World Mastercard Fashion Week with a bang, I doubt he's even breaking a sweat with all the talent in his Torontonian head.

Malorie Urbanovitch & Matière Noir: Tuesday, March 18 @ 7 pm (Runway)
Last year, the judges of the Mercedes-Benz Start-Up competition were faced with a decision so tough the only solution was to crown two winners and have them share the prize: a single timeslot on this season's calendar. Thus, Malorie Urbanovitch and Matière Noir's ready-to-wear designs are no-doubt slated to bring double the fun.

What are you most looking forward to at Fashion Week? Add your suggestions to the comments below.