The best and worst of Rob Ford merch

Rob Ford might not have surpassed cult favourites like The Simpsons, Grumpy Cat, and Human Centipede for bootleg merch, but he's well on his way. The question of who buys this stuff - and who makes this stuff - could be pondered for decades (and likely will be) but I'm not here to ask probing, soul crushing questions, like why there are currently 75 Rob Ford items on Etsy, 49 on Cafepress, 135 on Zazzle, and approximately 600 items on Ebay. I'm just here to guide you through the (wasted?) wonders of human creativity.

While timely novelty items can be fun (and potentially lucrative) I wouldn't advise buying any of these unless your personal brand really necessitates it - especially if you're going to give them out as office gag gifts, in which case they'll likely meet their end as dog toys before 2013 closes. Your money is your own, but I for one am holding onto my mine until someone molds a working solid gold crack pipe shaped like City Hall. Should be anytime now. With that as a warning, here are the five best of the bunch, plus five items that absolutely merit a week-long journey into your own drunken stupor.

Rob Crack Commandments
Pictured above, this hyperrealistic, regal portrait of Rob Ford, crowned, blinged, and surrounded by crack rocks, is probably the boldest Ford fashion statement you can find as of this posting. It comes in a red t-shirt ($34.99) or sweater ($59.99) that looks more like a Tumblr art creation than something that should actually exist. But here it is, ready to order. Shelfies is a Toronto company whose online shop actually stocks a little something for everyone - though I'm not sure who this design is for. 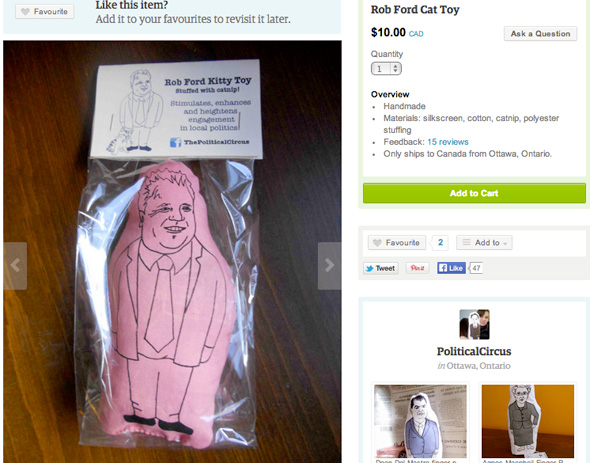 Rob Ford catnip toy
This pink, silkscreened, bowling-pin-shaped cat toy with Rob Ford's likeness on it appeared in PoliticalCircus's Ottawa based Etsy shop (she also sells finger puppets of Rob Fords as well as the Trudeau family, Stephen Harper, John A MacDonald, and more. What is even going on in Ottawa?) earlier this fall, but they're currently sold out. It was only $10! Maybe she'll make more if you ask nice. Or if your cat asks nice. Your cat doesn't know who Rob Ford is. 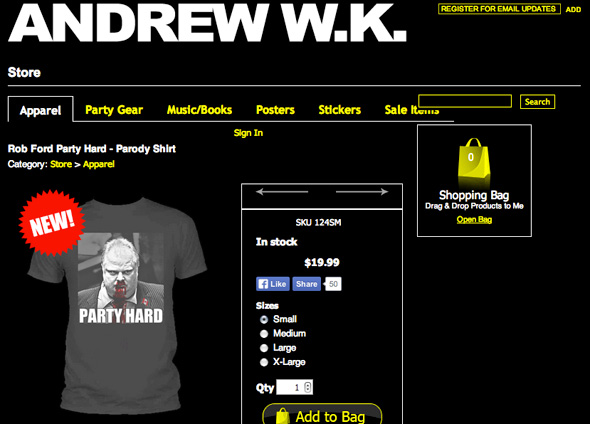 Rob Ford Party Hard - Parody Shirt
It's convenient of self-proclaimed brutal partier Andrew W.K. to cash in on Toronto's misfortune - it's also handy for us that he specifies that this is a parody shirt. At least these bloody, limited edition conversation starters are only $19.99 a pop (though American Apparel is still undercutting him at $14). Hey Andrew, maybe you can guest on the next Rob Ford noise tape. If you can keep up. 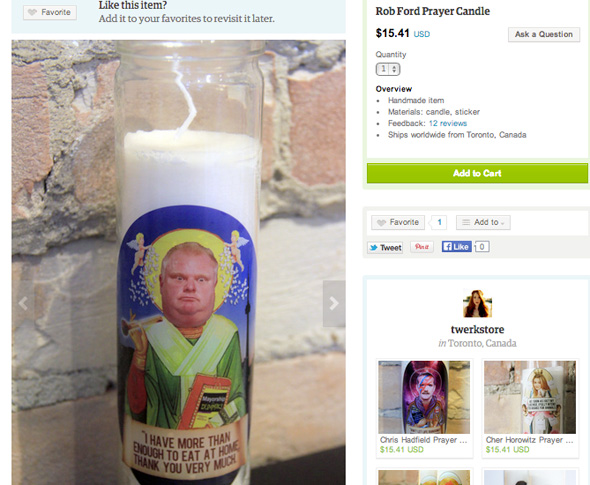 Rob Ford Prayer Candle
You know what's important? Dedication. Not to sound like a Nike commercial - but you're not truly committed to the cause of enjoying Rob Ford's humiliation of Toronto until you have a prayer candle bearing his image, complete with angels scattering crack cocaine above a quote - the quote - about eating pussy on an aged scroll. This thing might take years to burn down - just like Ford's career. $16. 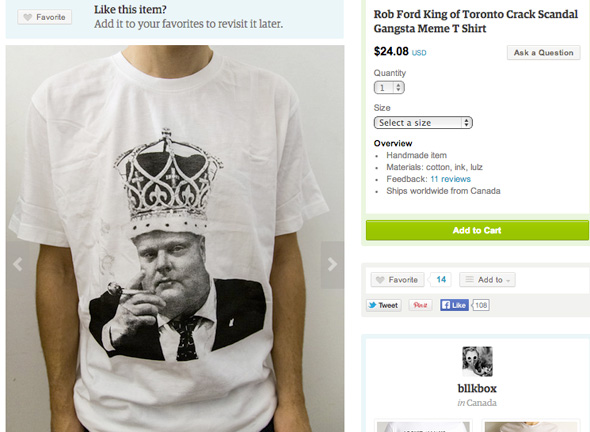 Rob Ford King of Toronto Crack Scandal
Sarah Friend aka bllkbox on Etsy might have the most wearable Rob Ford apparel with this "Gangsta Meme" t-shirt. For $24, you can wear Thomas Van Ryzewyk (Vice)'s iconic (am I being ironic here? I'm not even sure. Iconic.) black and white image of Rofo wearing a decadent crown and smoking a crack pipe. 100 points if you wear this to Christmas/Hanukkah/Kwanzaa dinner with the fam. 100 meaningless points. 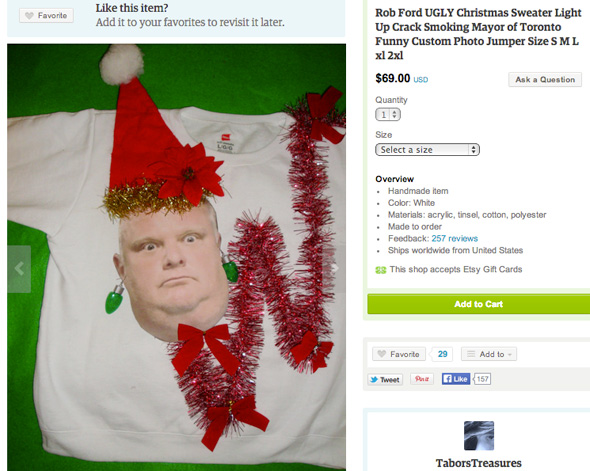 Rob Ford Ugly Christmas Sweater
We as a culture have taken the ugly sweater thing too far. When we were just buying them, cigarette burns and all, used for $4.99 at VV to wear at a couple parties, that was recycling. Now we're making them from scratch. Etsy store TaborsTreasures took a break from making $75.51 Miley Cyrus ugly Santa sweaters out of cheap sweat shirts and Christmas decos to immortalize Rob Ford's face, because - I'm not sure why. The earrings light up, so on the bright side it's a possible fire hazard. 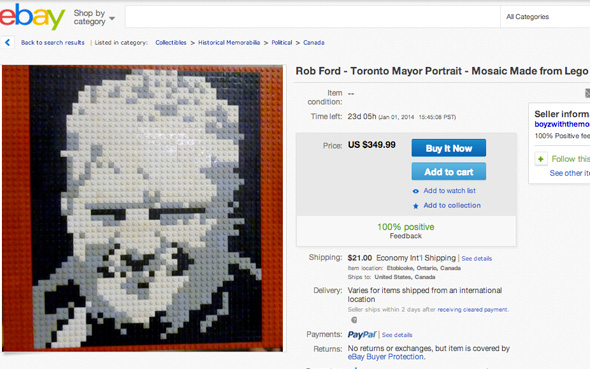 Rob Ford Mosaic Made from Lego Bricks
Brickworks is selling this lego portrait of Rob Ford, which is only "50 studs high by 50 studs wide" (that's 15 3/4" x 15 3/4"), $350 US on Ebay. The thing is about the size of a vinyl record, and basically says to any guest who enters your home "do not have intimate relations with this person, they are not capable of emotional maturity." The only good thing I can say about this awkward piece of Rob Ford pop art is the company is local. 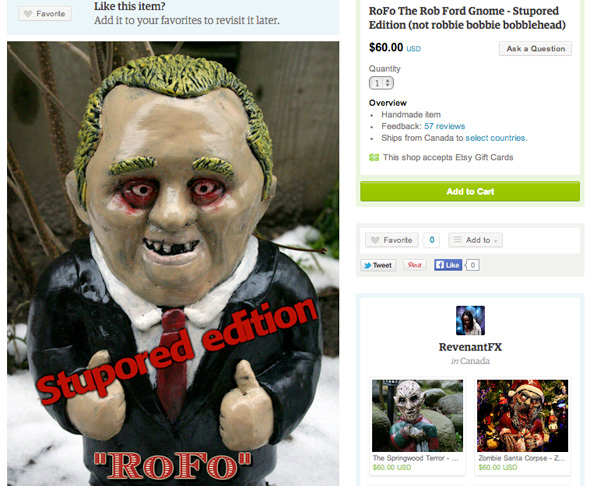 RoFo The Rob Ford Gnome
Everything about this vampiric RoFo lawn ornament from RevenantFX's Etsy shop is wrong. The matter of it being listed way after Halloween. The price, marked at $65.66 instead of $66.66 (cowardly!) The absence of white glitter snowflakes on the tie (wasted opportunities!) The evidence of dark roots when we all know Rob is a natural blonde. The fact it barely looks like Ford. The only way I'd buy this is if it were also a working smoke machine. 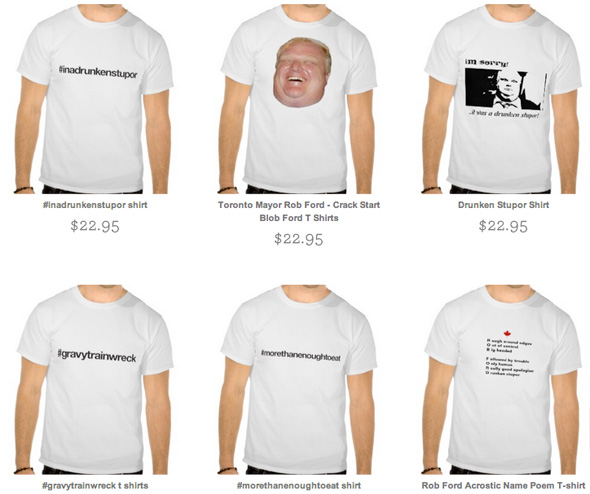 The T-shirts phone-ins
Browsing the metric tons of mediocre Rob Ford merch (10 minutes in photoshop + the internet, you know the deal) is like being locked in a room with three people acting out No Exit over and over and over again, forever. It is a nightmare from which we cannot awake. It is beyond the blighted face of capitalism - it is the evidence of our flaws as living beings. American Apparel, don't think I don't see you there. 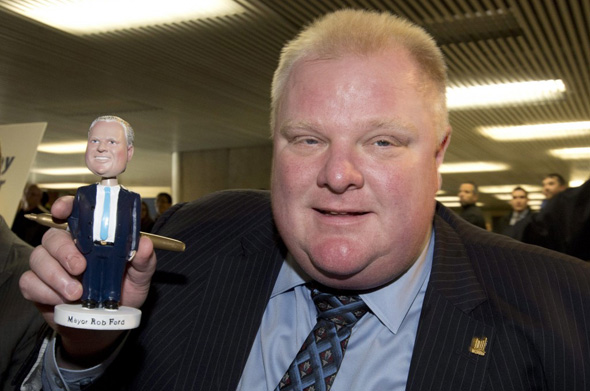 The Bobbleheads
Rob Ford's officially mandated line of wonky, way-too-handsome toys made in his likeness (which are now going on Ebay for hundreds of dollars) will forever remain here as the Worst Rob Ford Merch Ever, though his illegal "Ford" logo bootleg shirts come in at close second. Did Rob Ford order these when the crack scandal first broke, and keep them in a box in his office until the shit got really, really bad? We have to guess no, because there's been no other evidence of foresight coming from the Mayor so far. If you bought one of these, shame on you. Let's learn from this and do better next year.