This past Wednesday (September 25) marked the 10th anniversary of the White Cashmere Collection, a unique-to-Canada fashion show featuring extravagant dresses and headpieces made out of white and pink Cashmere toilet paper. Or, as Kruger Products calls it, bathroom tissue.

Twenty of the nation's top designers manipulated the material into ruffles, knits, and enormous architectural shapes - all of which stunned the audience in the best way ritzy TP can. The coveted runway show acted as a fund (and awareness) raiser for the Canadian Breast Cancer Foundation; supporters can now vote online for their favourite design, and Cashmere pledges to donate $1 per vote on behalf of the winning designer. DUY, Comrags, Lucian Matis, and VAWK are just some of the names on the roster, each one exemplifying the event's clever tagline: designing a future without breast cancer.

PHOTOS (captions below each image): 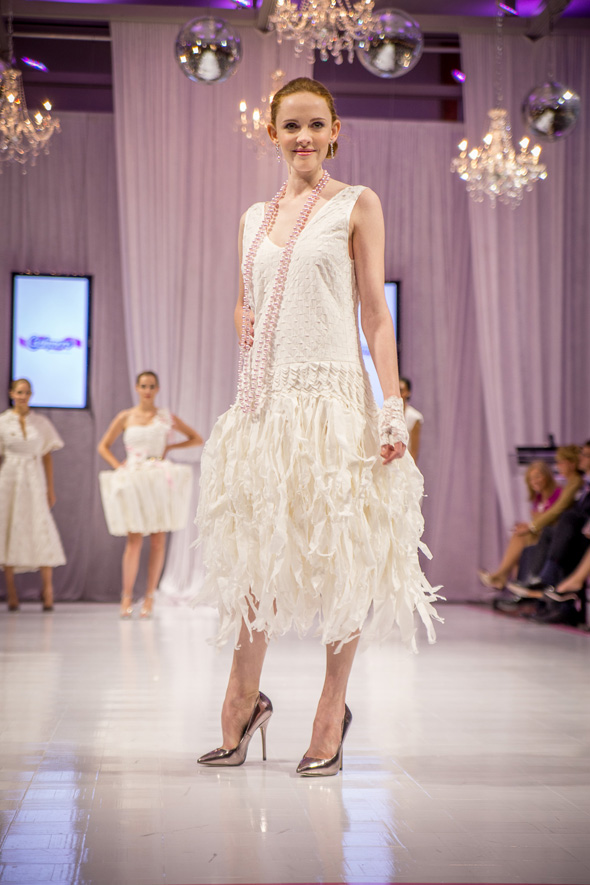 The show opened with one of my favourites: a drop-waist dress by Comrags. 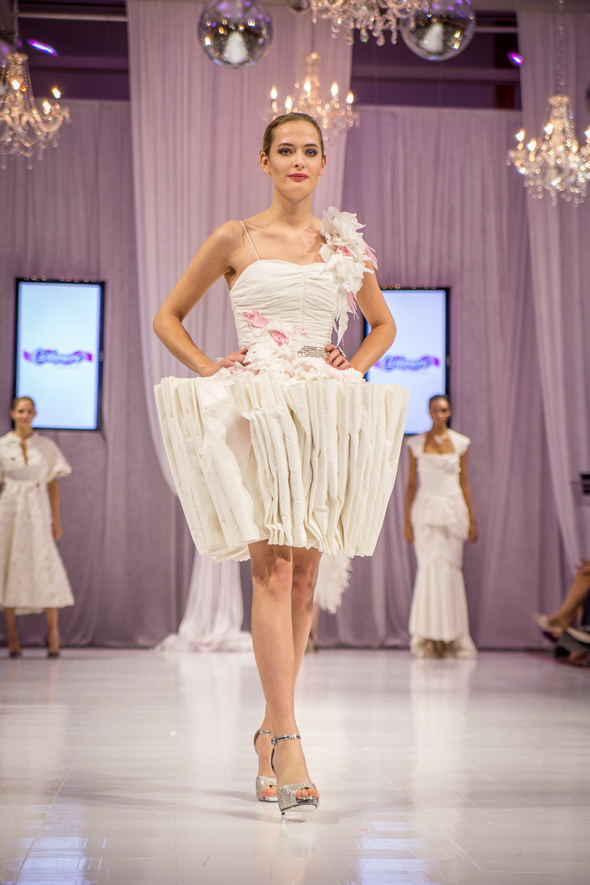 David Dixon manipulated large sheets into accordion-like folds, and balanced them out with a dainty bodice. 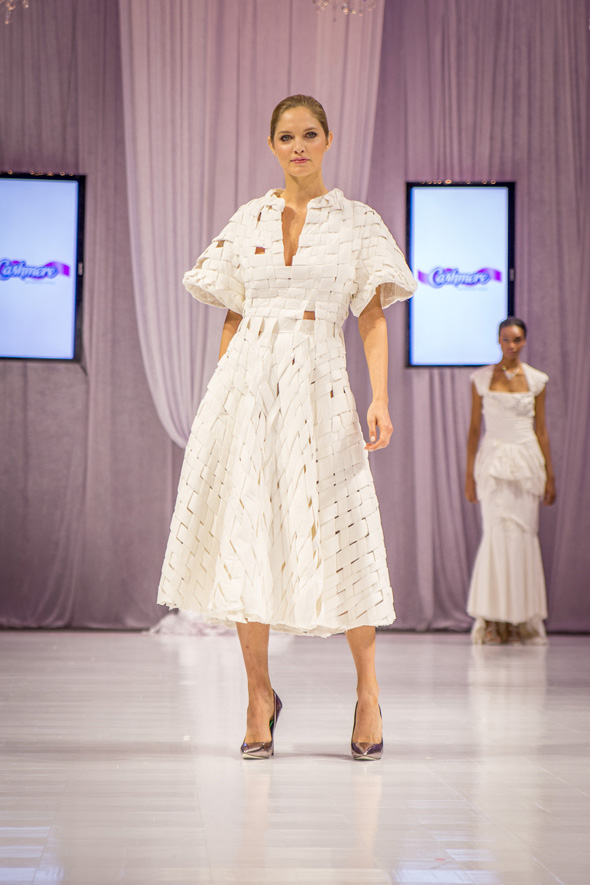 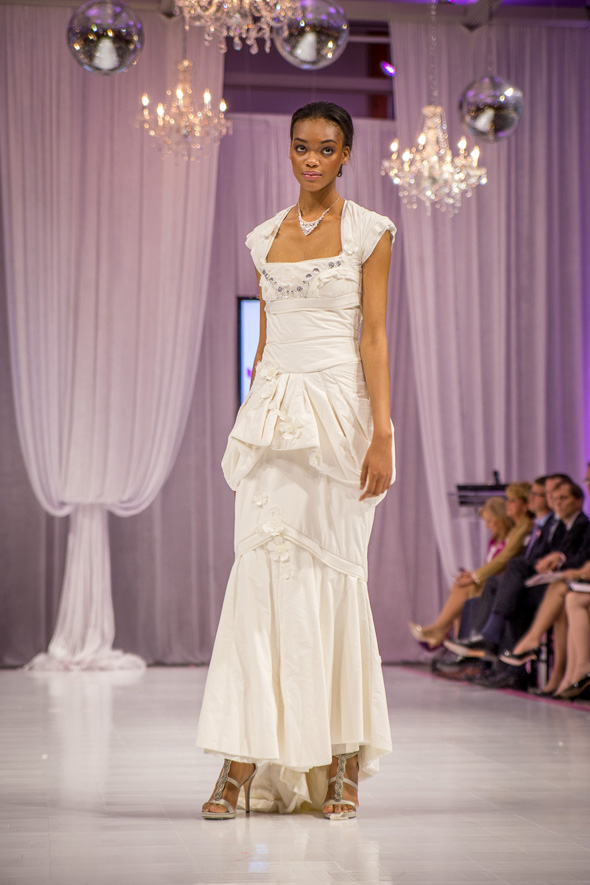 Though this dress' material is radically different than he's used to, Paul Hardy's timeless aesthetic still shines right through. 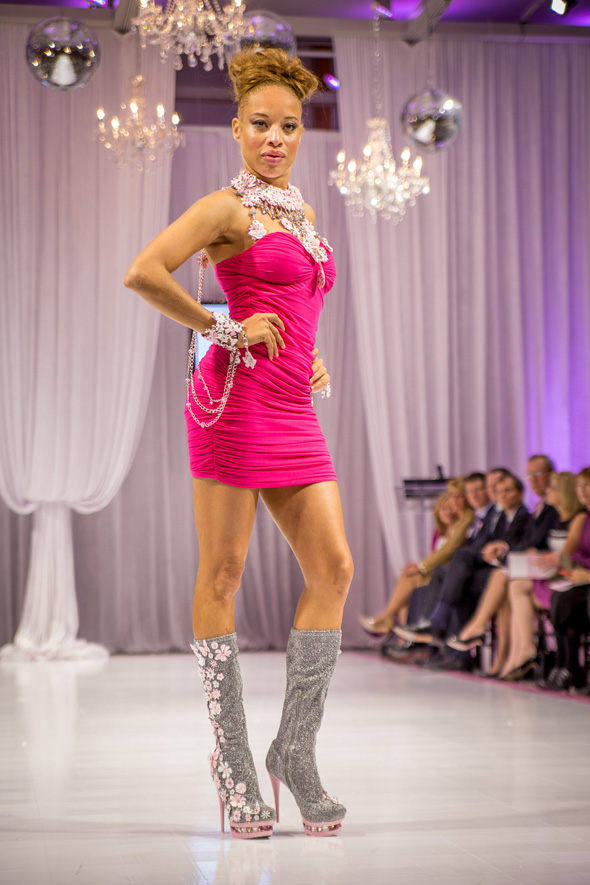 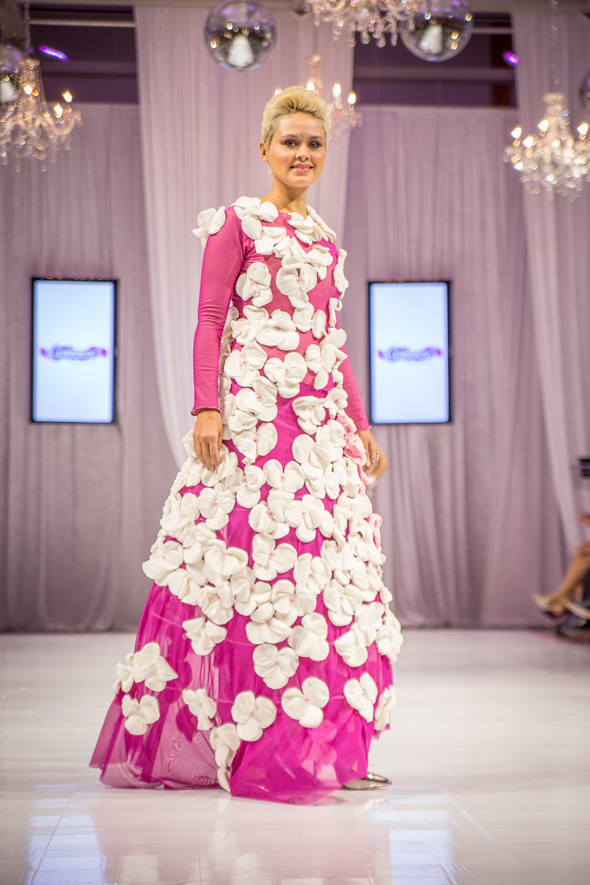 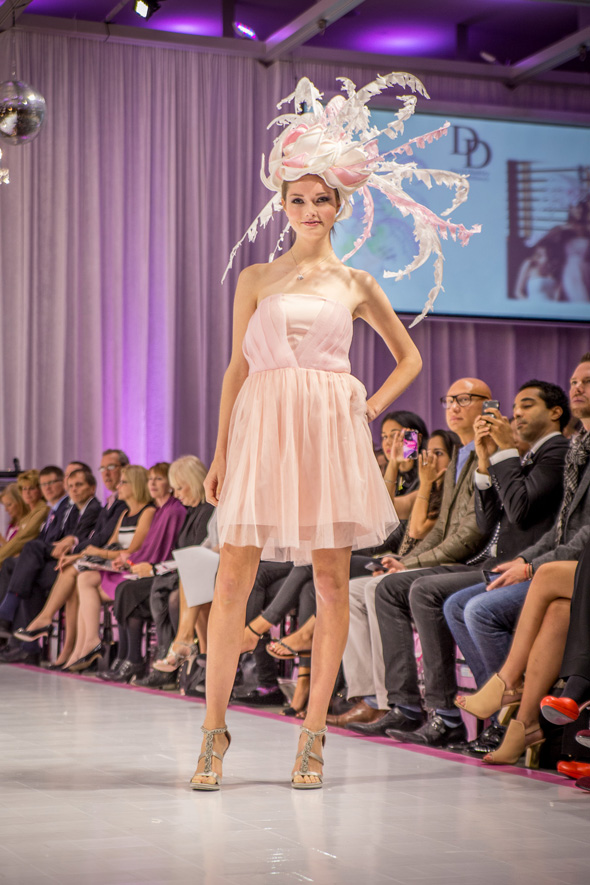 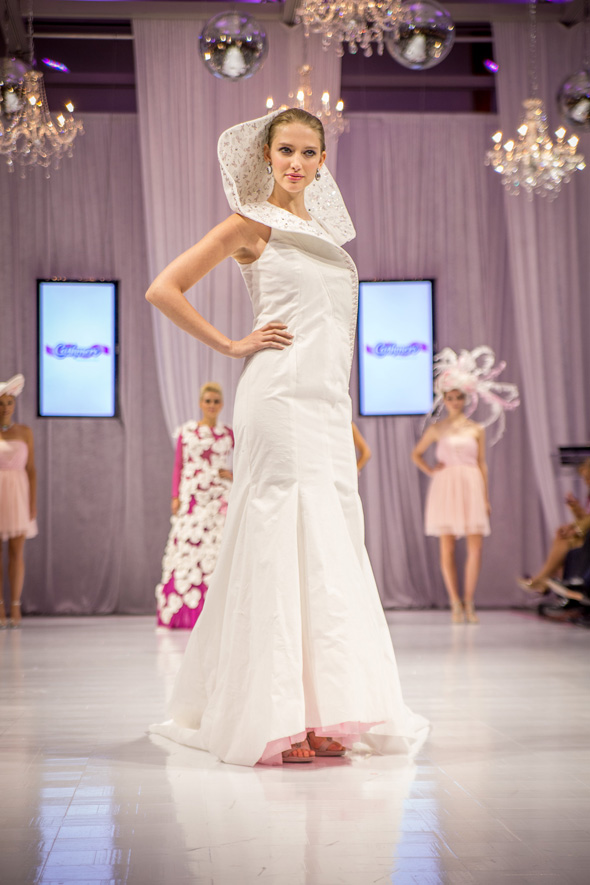 MICALLA by Camilla Jorgensen sent this collared number down the runway; covered in Swarovski crystals, no less. 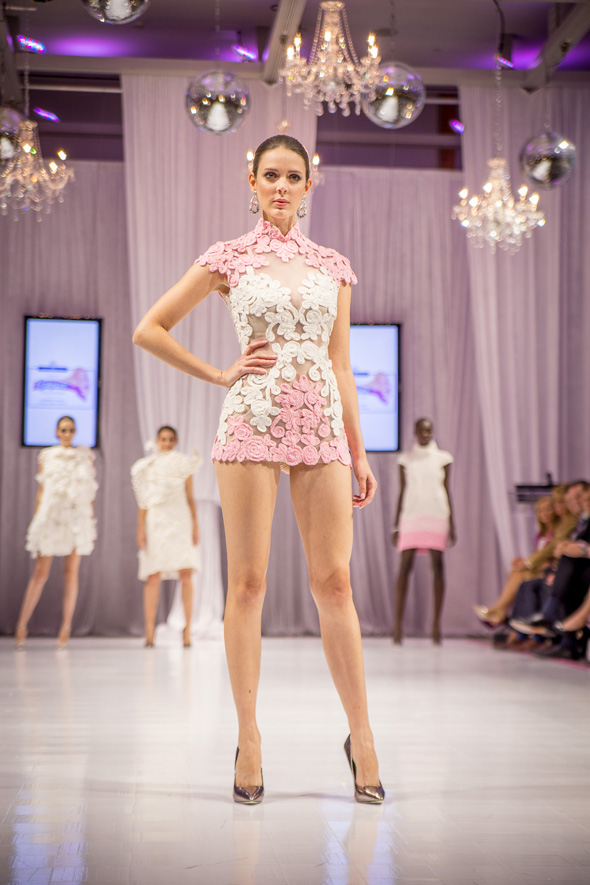 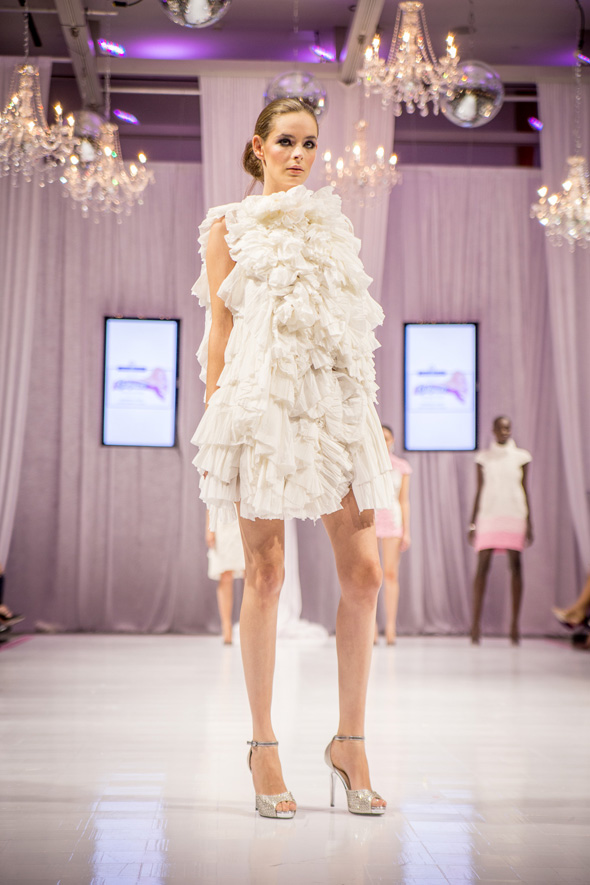 Marie Saint Pierre is known for her out-of-this-world silhouettes - this bold, ruffled look is no exception. 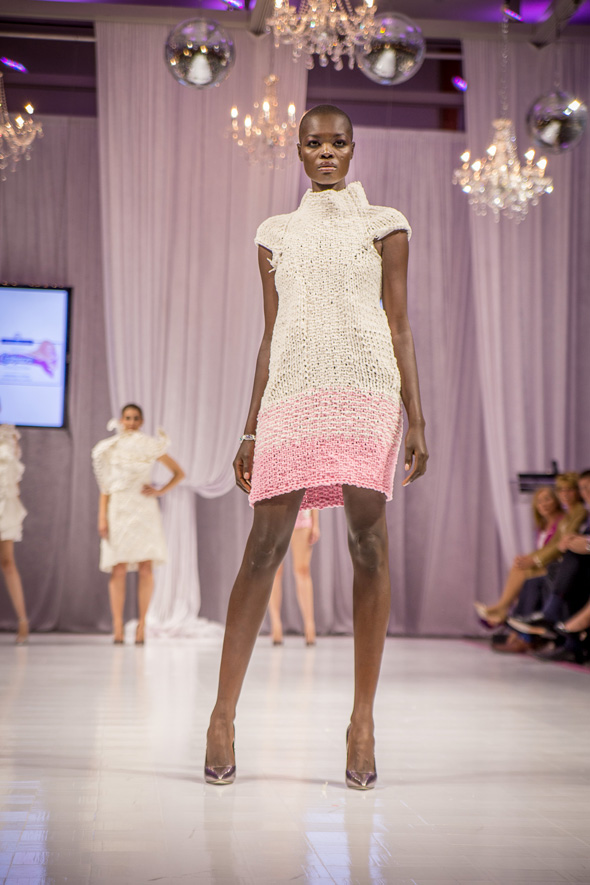 DylaniumKnits approached the Cashmere challenge as if it were any other
design conundrum. By first creating white and pink yarn, designer Dylan Uscher knit a high neck dress with cap sleeves. 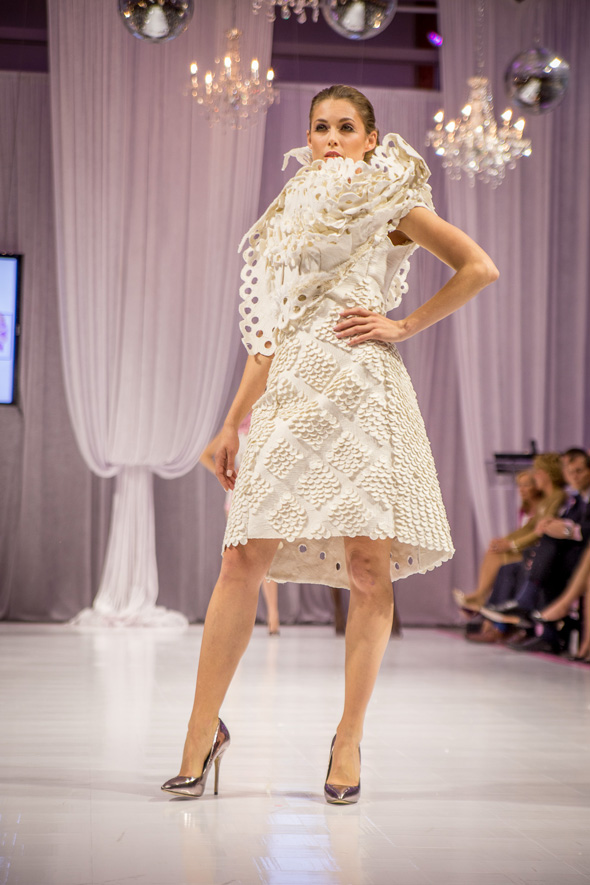 I went into the runway room thinking every look would be soft and ruffle-ridden, given the material restrictions. Joseph Helmer surprised me with the total opposite: a floor-grazing, sculptural masterpiece. 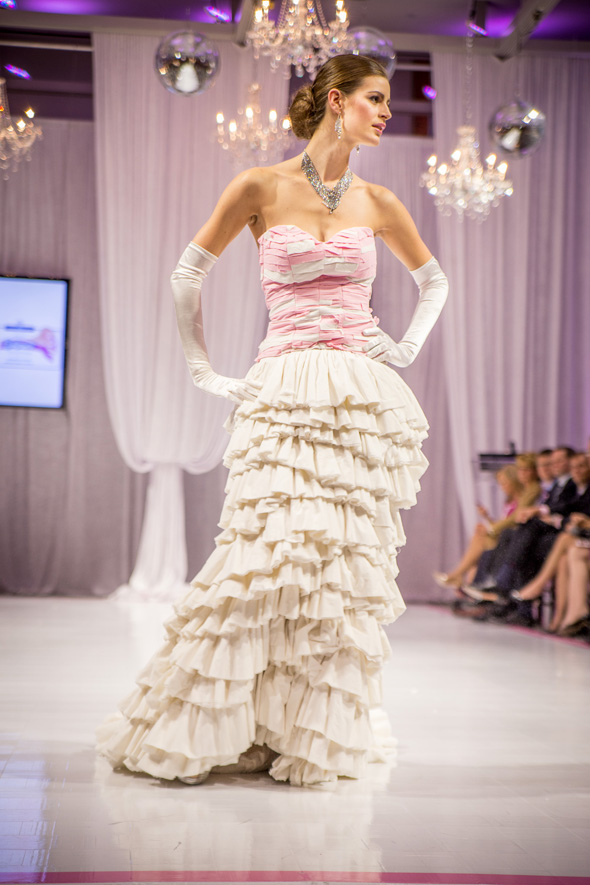 Anastasia Lomonova took the bridal route. An extravagant, white dress sashayed across the floor with just a hint of pink. 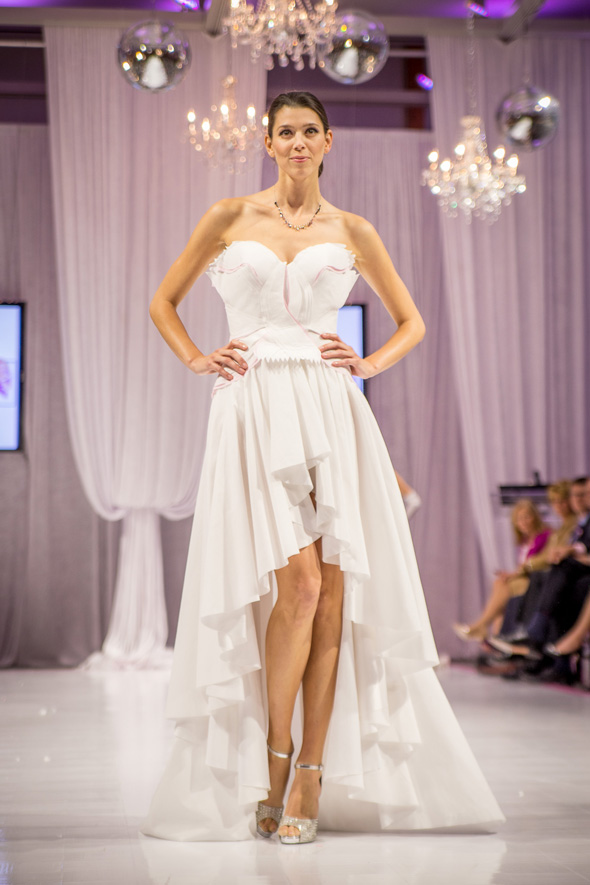 VAWK by Sunny Fong sent one of the most delicate looks down the runway; a cascading skirt - reminiscent of chiffon - whimsically floated by. 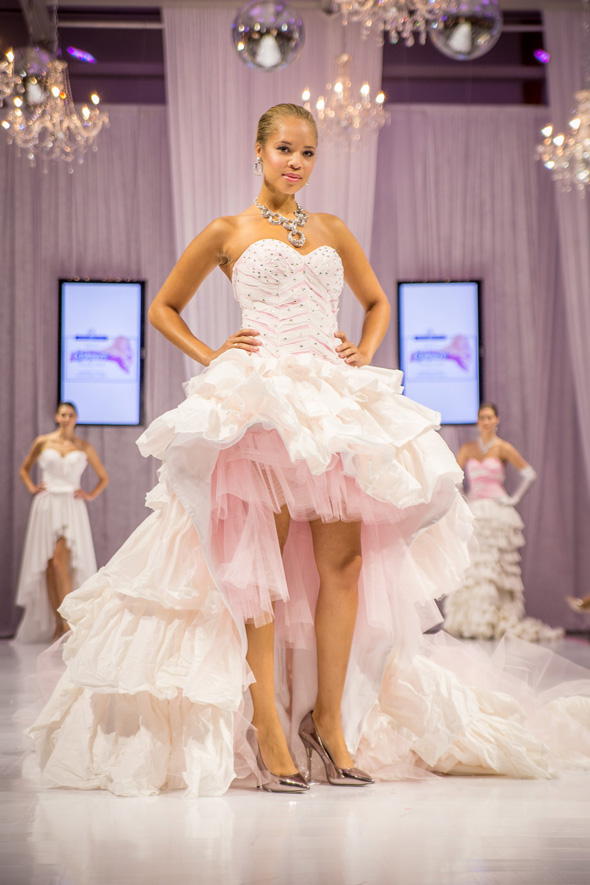 If it's not covered in rhinestones, puffed up to extremes, or dragging at least four feet behind, it's not a true Hoak Couture gown. 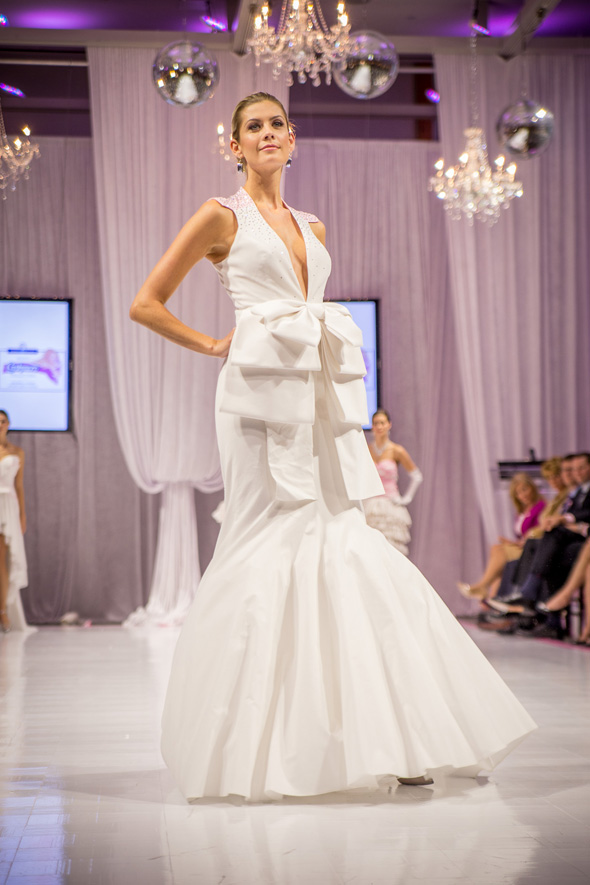 Bridalwear is Jason Matlo's forte, and it shows. This floor-grazing dress is architectural beauty exemplified. 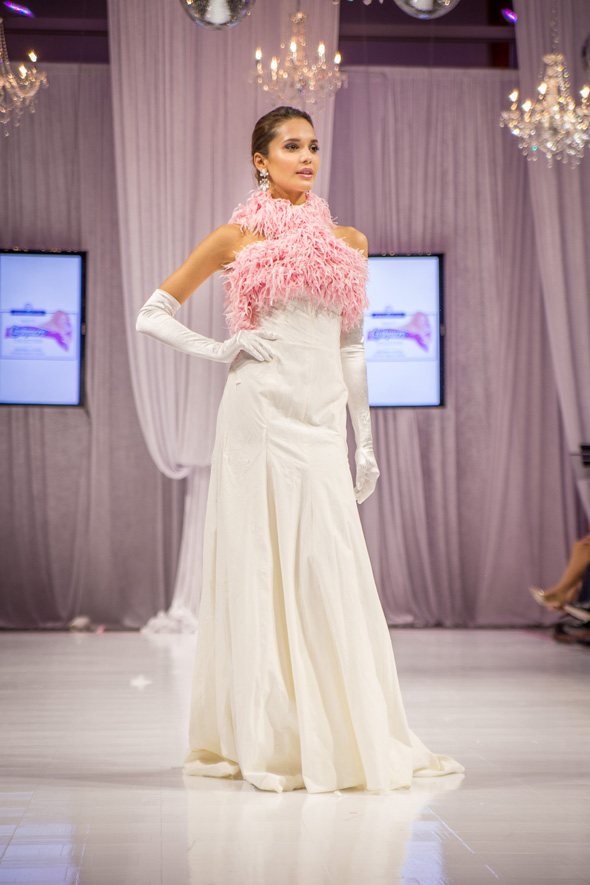 DUY showed just how versatile TP can be, mixing smooth and fuzzy textures into one floor-length dress. 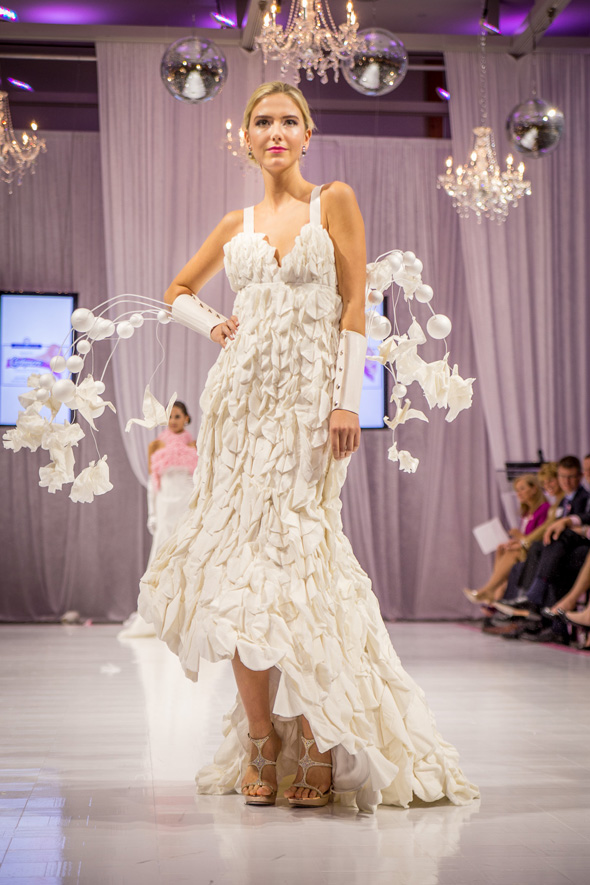 I'm going to take a wild guess that Christopher Paunil was inspired by peacocks. 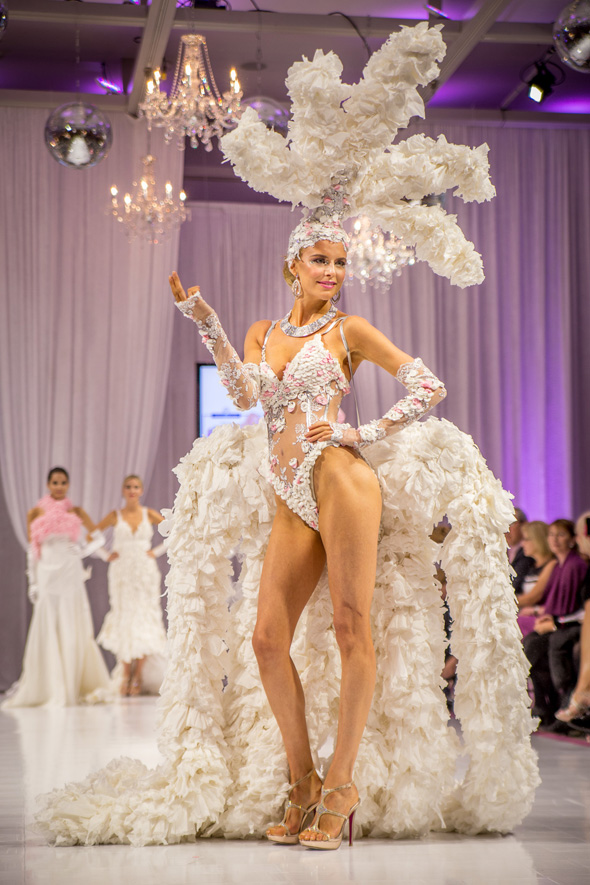 Rod Philpott probably created the best Caribana costume in the entire world. Remind me to stock up on toilet paper for next year's festivities. 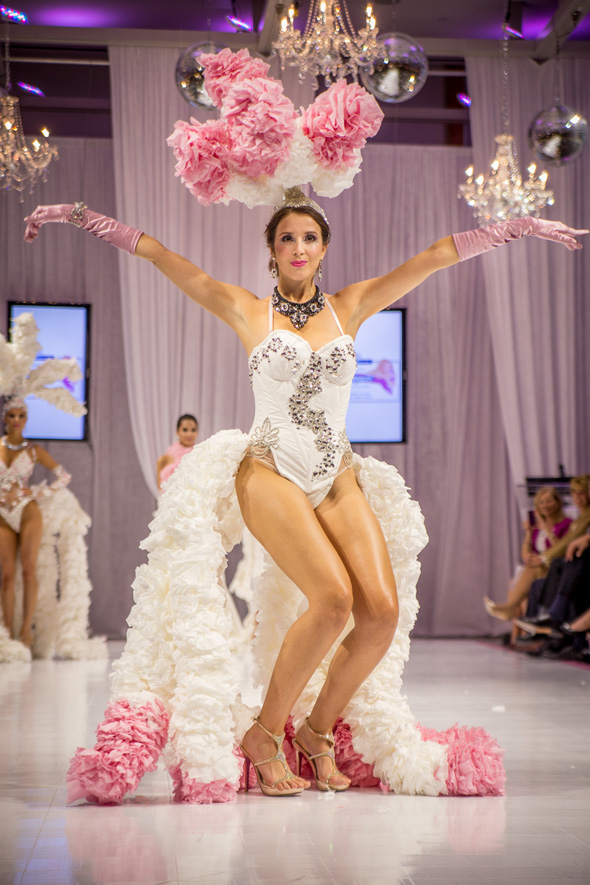 Farley Chatto played both the designer and curator of this year's White Cashmere Collection. Inspired by parties like the Brazilian Ball, this ensemble is eye-catching, intricately detailed, and - of course - as sparkly as they come. 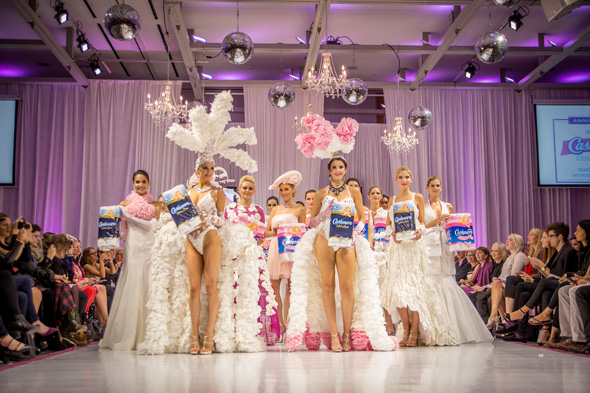 The show closed with every model glamorously gripping a package of Cashmere bathroom tissue.