For the first time ever, the National Home Show and Canada Blooms are sharing a venue and a ticket price, which means that you can indulge all of your nesting fantasies under one very large roof. Because this is where we all end up, after shopping for clothes has become depressing and partying is simply exhausting, and you realize you'll never drive a Lambourgini on a summer weekend afternoon, and that most of your personal equity is tied up in your home and whatever scant square feet of grass and weeds are out back.

Spread out over 600,000 square feet at the Direct Energy Centre at the Exhibition grounds, the NHS/CB is guaranteed to make your head spin and/or your feet ache. Putting them together is a strange marriage, as the former is really a big trade show where, at its most pragmatic, you can comparison shop for a new roof, whereas the latter is largely a celebration of stuff that you can grow before the sunlight fades and the ground freezes. 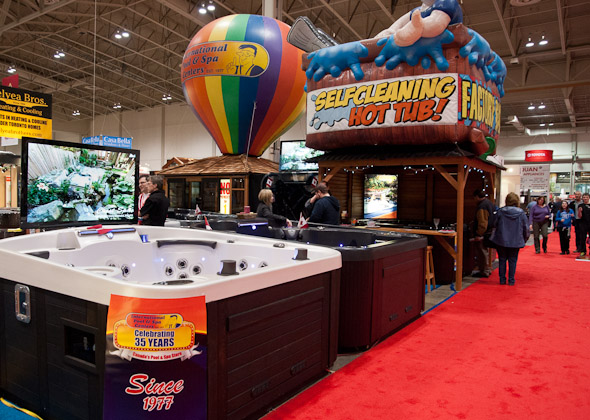 The presumed highlight of the Home Show is the R-House Dream Home, tucked into a far corner of the DEC at the end of a long journey past the booths selling hot tubs, formed concrete foundations, home entertainment wiring systems and more hot tubs. The R-House is a descendent of those "Homes of the Future" that we still see recalled with a smirk in black and white, those mid-century split levels where the fridge rises out of the kitchen countertop, your shoes are polished when you place them in a receptacle in the hall closet, and the robot maid brings you coffee and the morning paper. 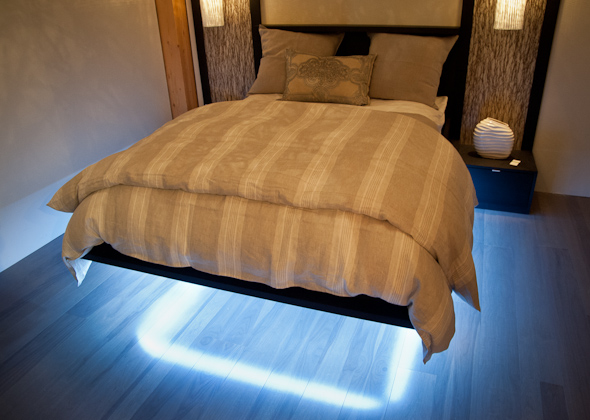 Much of that futuristic technology has either become either impractical or commonplace today, and now the truly forward-looking home sells itself on a peculiar combination of recycling and energy-saving tech (straw-bale walls! gray-water recycling! smart grids!) and luxury, like the massive glass walls of the R-House and its mansion-like footprint. The future homes of the '50s probably weren't very green, but they were based on the idea that technology would have a democratic purpose, helping us all by being both cheap and labour-saving; today's dream homes, by comparison, try to seduce us by letting us imagine ourselves as both richer and more virtuous. I have seen the future and, at least for the moment, it is Calvinist. 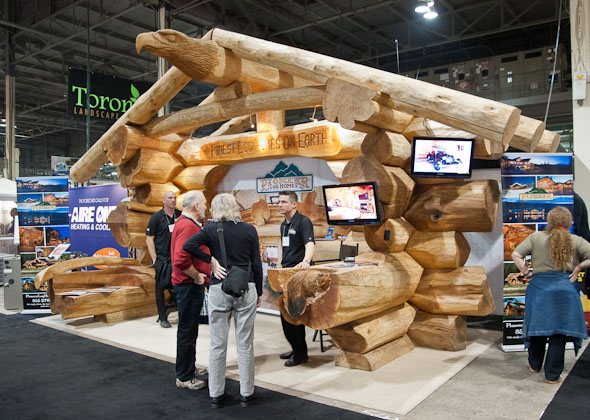 Once you leave the R-House, however, you're back in the world where your eavestrough leaks and your roof needs replacing, which is where the majority of the Home Show displays come in, offering metal roofs that will last for decades and rain gutters that will, well, drain the rain and snow. Occasionally, though, there are retailers with something truly unique to sell, like the guys from B.C.-based Pioneer Log Homes, who will build you a palatial log cabin that, to my eyes at least, looks like a man cave with imperial ambitions. 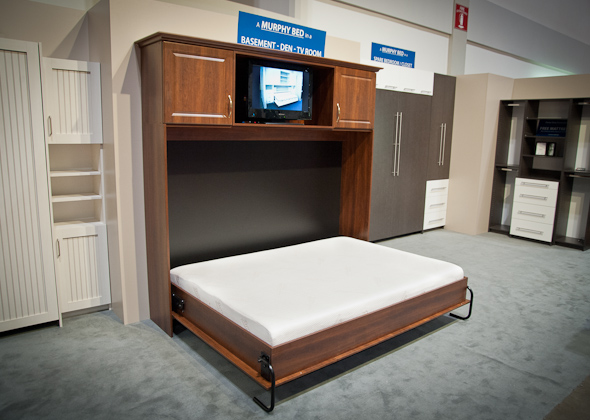 Of all the retailers in the building, the one who spoke most to the young condo dwellers within walking distance of the show were people like Hiddenbed, whose Canadian-made improvement on the Murphy bed seemed perfectly suited for the 400 square foot condo owner happy to lose access to their computer desk for the night when they fold down their bed from a custom wall unit. 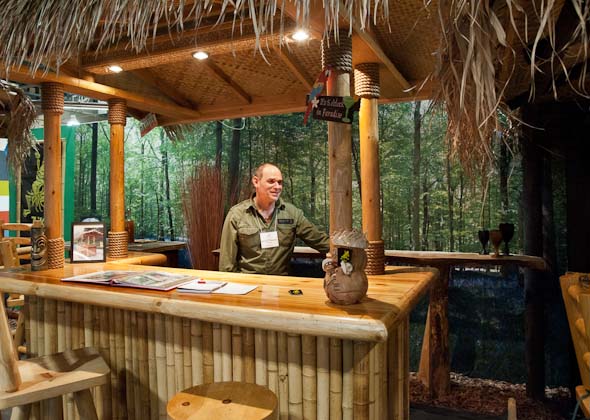 And then there's Tiki Dave, whose display just a few dozen yards from the R-House Dream Home spoke to a more whimsical kind of fantasy life. Dave Di Tomasso was a frustrated carpenter who left a career in marketing to build decks and then discovered clients who were willing to buy the tiki bars he was building in his spare time from recycled wood. The domestic fantasy he's selling is decidedly retro - and probably a bit unsteady on its feet after a few mai tais - but it looks like a lot more fun than a new roof or flooring made from old sneakers, and there's no doubt that Dave is filling a niche no one else, not even the hot tub dealers, can see. 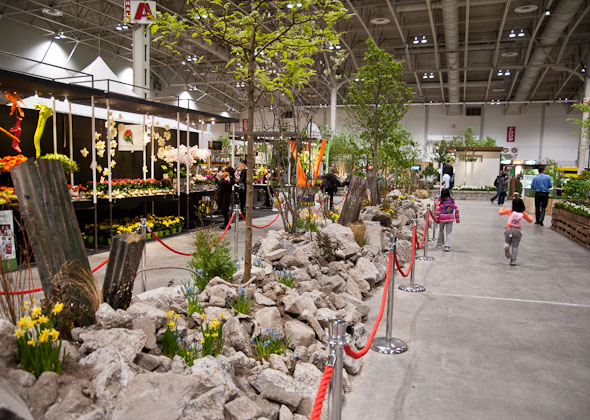 There are people selling things at Canada Blooms as well, but the majority of the floor space there is taken up with garden displays that don't really sell anything but the talent of their creators and the promise of spring, just over the horizon. The most urban thing in the whole building was probably the Concrete Bloom Bursts, a long garden display that cuts through the CB exhibits - a low berm of construction debris spiked with flowers, grasses, trees and shrubs. A collaboration between landscape architect Victoria Taylor and Jonas "Ecoman" Spring, it was probably the sole nod to the downtowner more likely to see plants growing on the edges of construction sites than in raised borders. 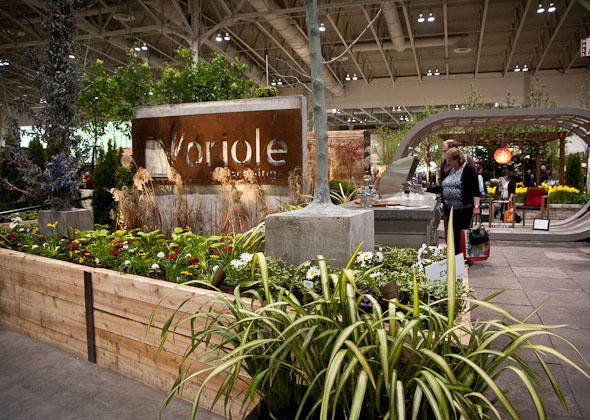 The most iconic bit of garden accessory at CB was probably the big oval shelter at Oriole Lanscaping's display - an attractive piece of architecture that's likely to be among the most photographed bits of the show. The highest profile displays at CB are the Juno "Rock Gardens," four displays put together with input and inspiration from Canadian musicians like Feist, Sarah Slean, Keshia Chante, Jann Arden and Royal Wood. Feist's was the most grandmotherly - an overgrown patch outside a derelict cottage - while Arden's was the most lavish, a vivid field of flowers spiked with a flat screen TV.

Slean and Keshia Chante's were the most urban, the latter featuring a fountain accented with a neon strip that would suit a rooftop bar, while Slean's would fit into the tiny patch behind a downtown Victorian semi, and boasted a vintage beer fridge.

Ultimately, though, both Canada Blooms and the National Home Show cling to a suburban aesthetic - there were very few displays that easily scaled down to tight city plots, or directly address the particular challenges of fixing and improving fifty to one hundred year old homes with a long history of uncertain renovations. It's a market waiting to be acknowledged, and one waiting literally just outside the doors of the show. 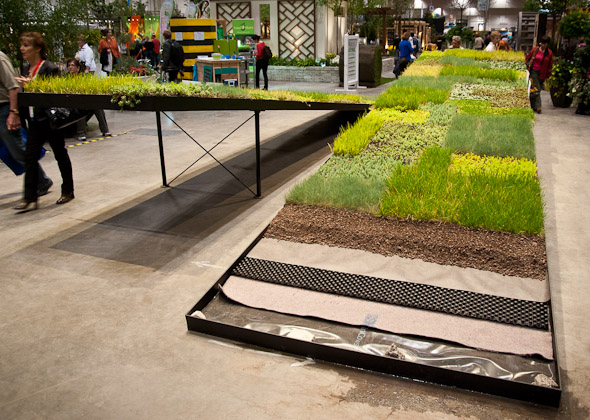 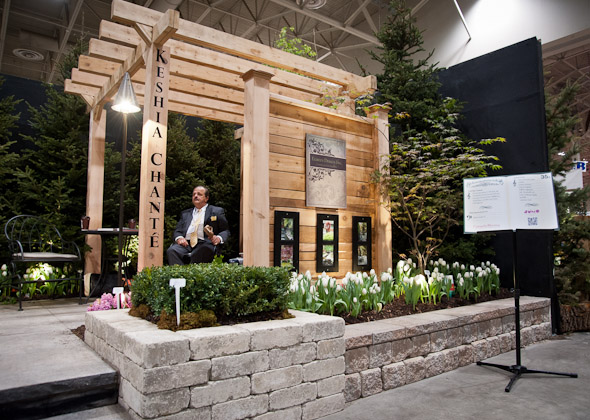 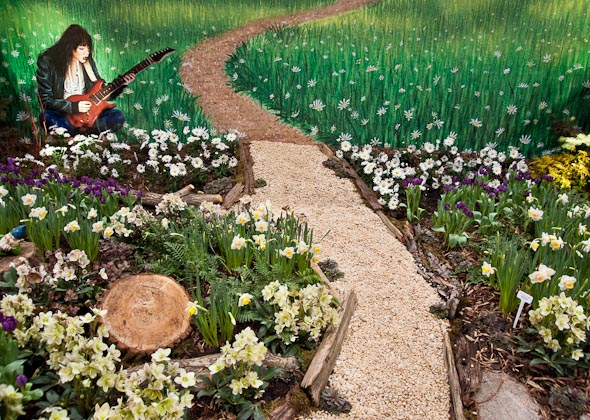 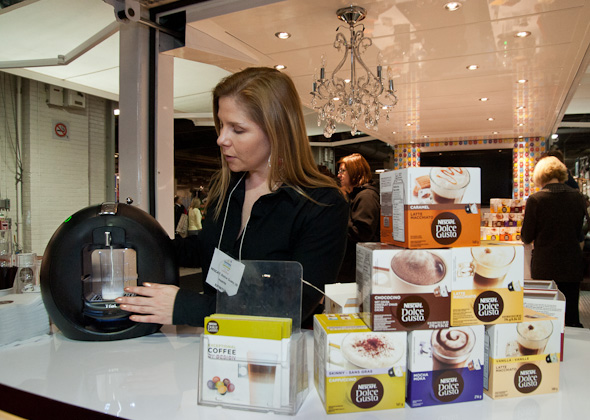 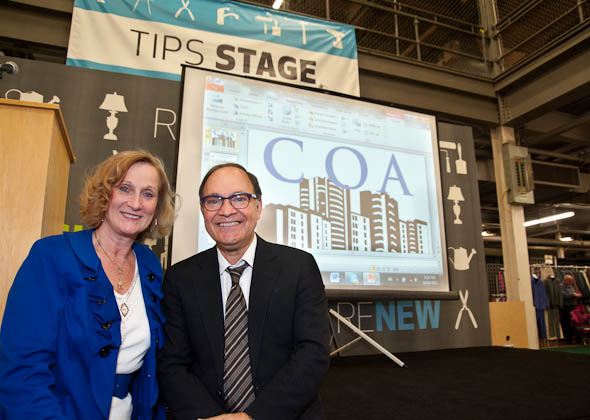 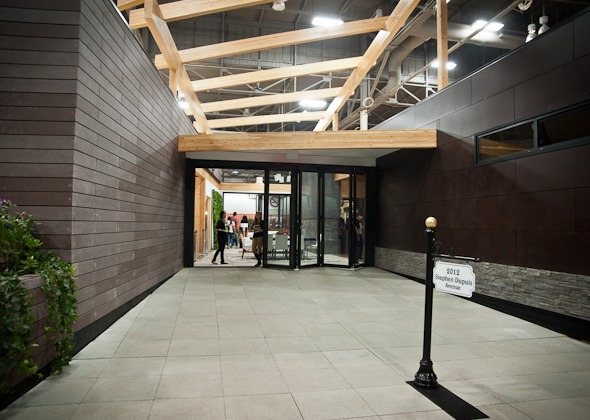