Some griped (including me) about the distance it would take to travel to Evan Biddell's evening show on Tuesday night. Although - from a distance - across the busy death-making Wilson Avenue was a Caribana display to greet those lifers who made the effort to see Biddell's show. It was the kind of effort that did not really make sense, but it created a "wow" impact - a criticism Biddell has faced season after season regarding his own artful creations. Some have remarked that his designs are pieces of art with no commercial appeal - I'll save you the "enfant terrible" reference. Oops. 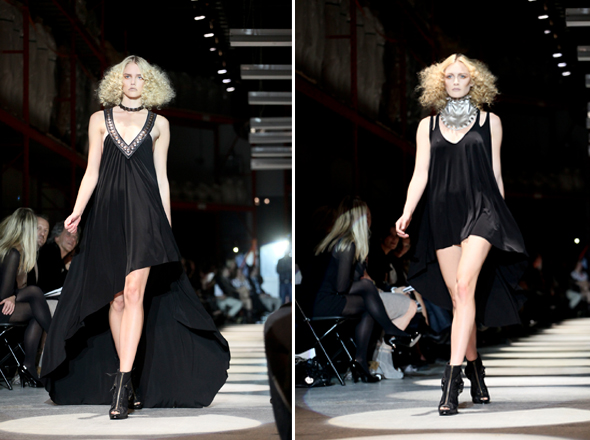 What Biddell's audience has come to expect is a spectacle and not just a show with a stark white runway and waif-ish models. Biddell always adds a bit of individuality to every runway he produces and last night's "Kingdom" presentation was no exception. Held in a mannequin factory at Wilson Ave and Murray Road (Seven Continents), guests were piled into a factory setting, later to be ushered to a warehouse downstairs filled to the rafters (literally) with display mannequins for retailers. Darkly lit, it was a nightmare for some, but the industrial space proved to be an exciting change from the traditional LG Fashion Week set-up. 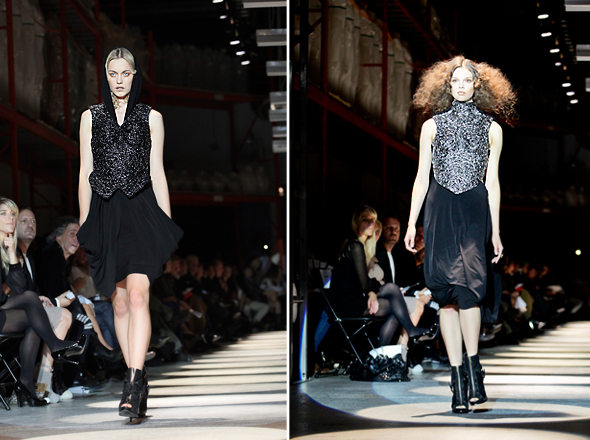 Biddell responded to criticisms of the past with a cohesive collection that not only retained its artful edge, but remained commercial. Although this served as a gesture toward his birth-of-spring maturity, Biddell - like all adults - still wanted to have a bit of fun.

Biddell notes that he took inspiration from the elegance of armor and gladiators, but as is true of most designers, this could be viewed more so as a reflection of the way most people perceive their clothing as a layer of protection. 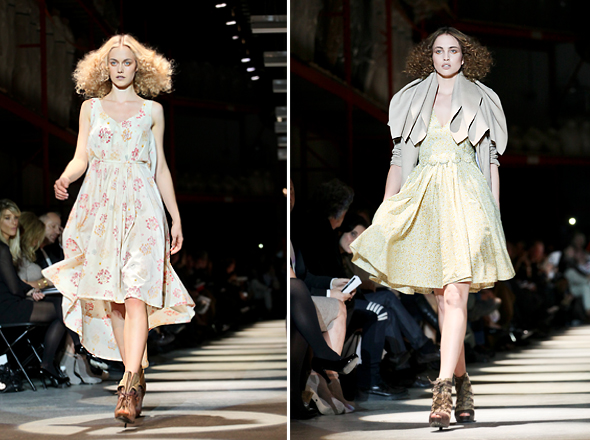 The show began with a dramatic, Chariots of Fire-esque soundtrack, followed by a short pause and then darkness. A spotlight followed the first model wearing a very feminine dress in a floral print, with button detailing at the waist. The mood was set with dramatic music and a quick step by the model as she carried an oversized basket in fear of an absent mobilized terror. 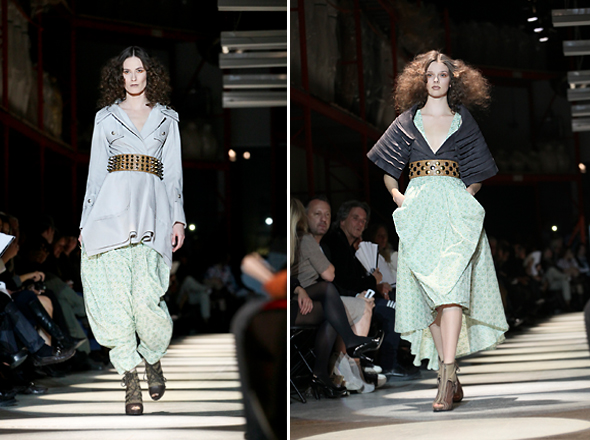 Then, as models began to make their steps on the runway, it became clear that the theme of armor was very much present in the designs. An opening model is seen wearing a wire breastplate, but an airy quality is brought to the warrior bodice with a fluttery jersey skirt.

Liquid draping is stunning in a trapeze dress option with a racer back - this level of craftsmanship could be seen in a number of choices, showcasing Evan's talent for construction. 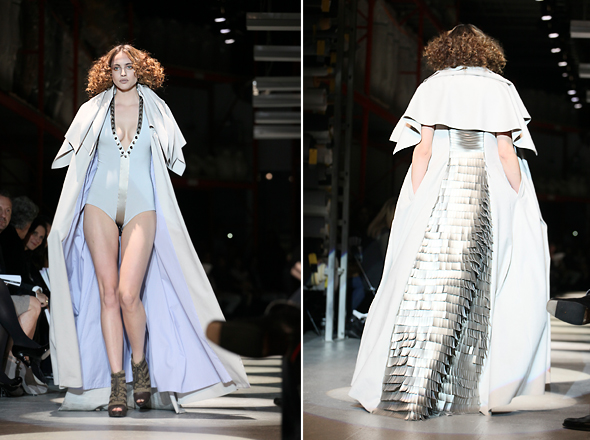 Where a black trapeze dress may seem subtle for Biddell, he made up for it with a dress constructed entirely of shimmering gold discs. For something that should seem heavy, there was movement to the piece, bringing beauty to his sourcing of interesting (and sophisticated) materials.

Biddell shows his mastery of design in the way he constructs unusual shapes - this was best seen in a series of jackets that - for me - were the pinnacle of his successes last night. 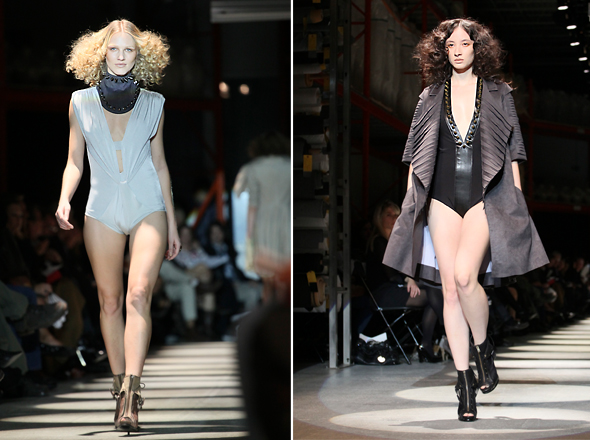 Atop a leather trimmed one-piece swimsuit was the most refined-yet-modern jacket. Intricate pleating on the sleeves and along the bodice had an obsessive-compulsive quality, while the gill-like pleating along the waist showed added interest where someone may not typically find it. It is the aggressive modernity that Biddell followers have come to expect.

And since I'm referencing swimwear, Biddell constructed plenty but the piece that caught my eye was a sleeved option in dove grey that mimicked Logan's Run - worthy of a young Jenny Agutter. It was this future-armor that brought an extended timeline to the looks (and theme) walking down the runway. 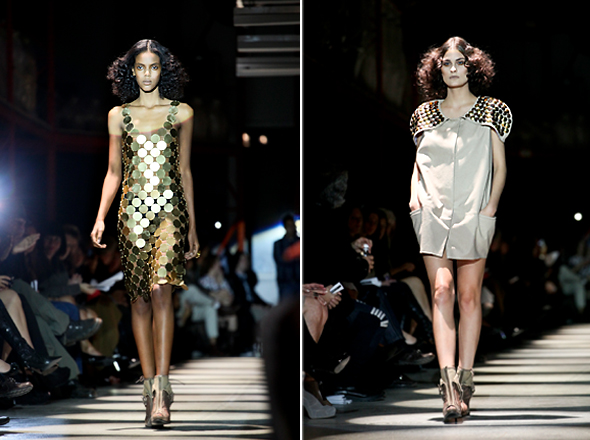 Pleating continued in other jackets, including a full length coat in grey with detailing along the spine. It conjured images of a reptilian shell, but its success could be seen in the editing. Because the pleating is isolated along the spine, it is not only playful, but it creates a walk-away point of interest. It is the kind of impact Biddell has long made as a designer - everything is worthy of a second glance.

Other detailing included stud and metal tack-head trimming, while printed textiles made an appearance in the form of prairie skirts, harem pants and feminine frocks. 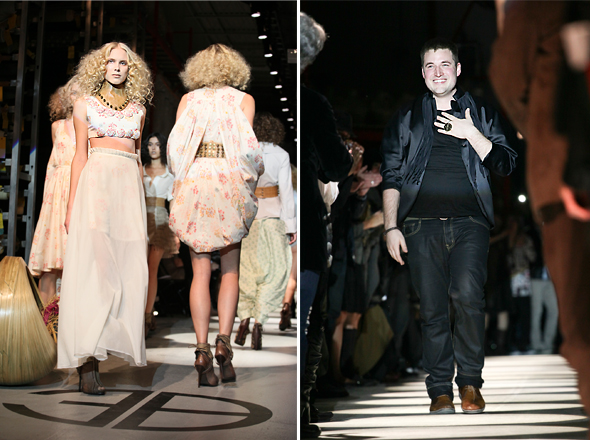 Speaking of femininity, one of Biddell's greatest achievements with shape was a floral print dress with draped back and bubble hem skirt. The back draping was connected to the waist to create the appearance of a voluminous skirt and a makeshift batwing helped carry the model's elbows. Call it femininity with an edge.

Despite what critics may have said about Biddell's past seasons, he is showing Toronto fashion that he can not only create a cohesive (and beautiful collection), but that he's listening. Biddell may or may not be what you perceive as a veritable bad boy rebel, but one thing is for certain, the man knows how to make a statement. And frankly, I can't think of a better way to kick off the fashion weeks ahead. 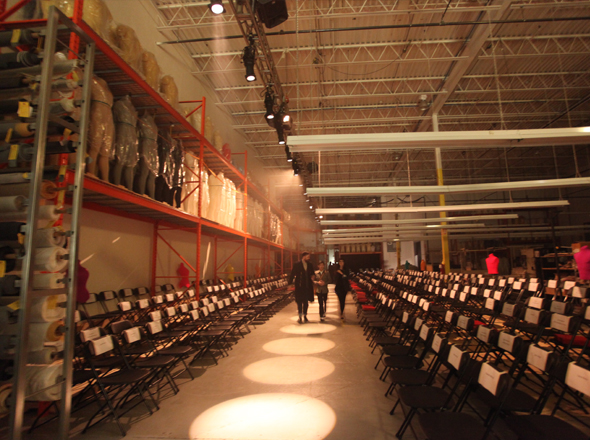