These guys are so FAT

I was asked for input on the state of the model backsides on the runway at ADO LES SCENTS by Hyun Yeu. My response: You mean, why are they so big? In some cases, they looked huge, much larger than I imagine they actually were. The tailoring was off - in most cases, there was far too much excess fabric, creating an extremely unflattering shape for most every man, including the handsome models.

The theme for this season was rain and the ability it has to form a sense of urban ennui. The boots reflected this, as did some of the textural elements. The show opened with a model sporting a sheer hooded number that was long in the sleeve to create a drooping effect. Combined with a sequin disco legging, Hyun Yeu translated the feeling of being soaked and emphasized the nature of rain, sans umbrella. wet = rain, got it. 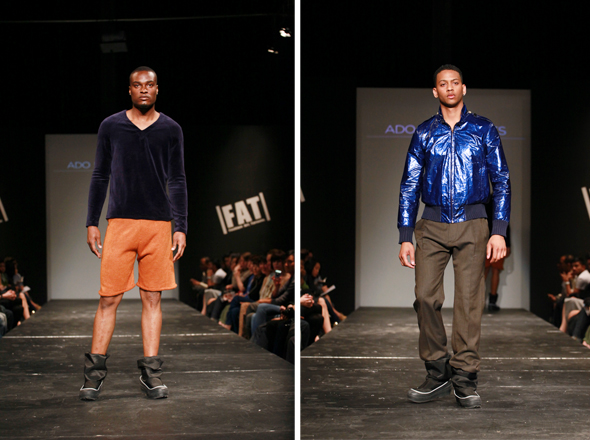 A pair of bright orange trousers were shiny and cheerful, adding a bit of spunk to the runway. Facing the mood-crushing weather with a smile? Alright, I like it. Combined with a well-tailored double-breasted jacket, the look appeared finished and very wearable. With menswear, a colour breaks with tradition in the same way choosing a foulard over a bow tie would - modernizing the market can sometimes be that subtle, but it doesn't occur too often, in fear of losing grip on market share. ADO LES SCENTS stepped up the game a little, which I respect and admire. 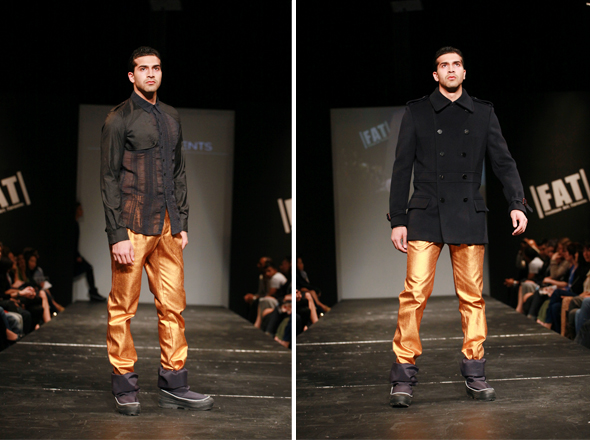 A sheer hooded vest looks cheap, especially paired with an ill-fitting brown trouser - why he thought this would revolutionize menswear, I do not know. On the flip side, I saw value in a velour v-neck sweater that was paired with orange shorts - the sweater has an ease of wear that makes it adaptable to a man's current, more traditional wardrobe. The shorts? The fit is neither well tailored, nor is there a flow-y, sporty quality to them. I wrote that they looked fit for Gumby in Pokey orange - I stand by this.

A candy blue jacket caught my eye and I can see many men opting in, but its fitted mid-section and grip at the wrist proves that only the slimmest gents can wear it for a figure-flattering finish. Even on a model with a well-sculpted body, there was a problem with fit - you could see it in his awkward walk and the belly that was achieved (despite there being no bump at all). I liked it, but it will only work for some. Buyer beware. 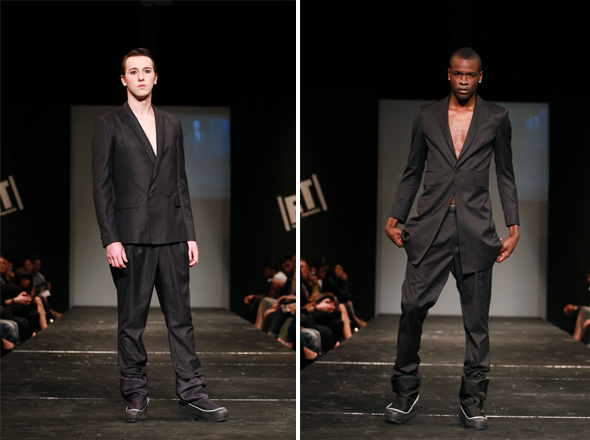 I could speak endlessly about the problems with fit, but ultimately ADO LES SCENTS vision for menswear had some positive points. The colour was delectable, the shapes (if tweaked) could work (perhaps move toward a carrot pant) and the variety promoted Hyun as a multi-focused designer - in menswear, you need to be.

I love seeing the transformation of menswear - it means that someone is thinking that not enough is being done. It's this reason that ADO LES SCENTS will make an impact. He sees the void and he is leaping in to fill it. Welcome to Canada.