There was some concern about the possibility that flight cancellations would prevent the international designers from showing at FAT this year, but ex-pat Jasper Garvida and Square Root of Two showed that if there is a will, there is a way. 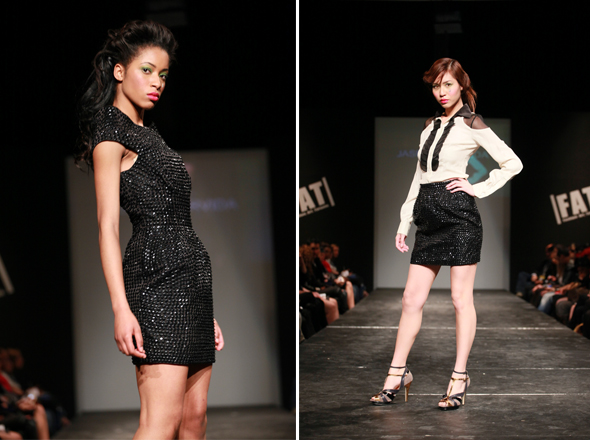 Known for claiming the title of Project Catwalk (UK) in 2008, Jasper has since moved on to create beautiful art-deco inspired outfits for confident women. The best of the bunch was a knee-length jacket that paired rich emerald and soft tan velour with leather and a dramatic fur collar - it has an heirloom quality to it, making it a piece you'll want to keep forever. 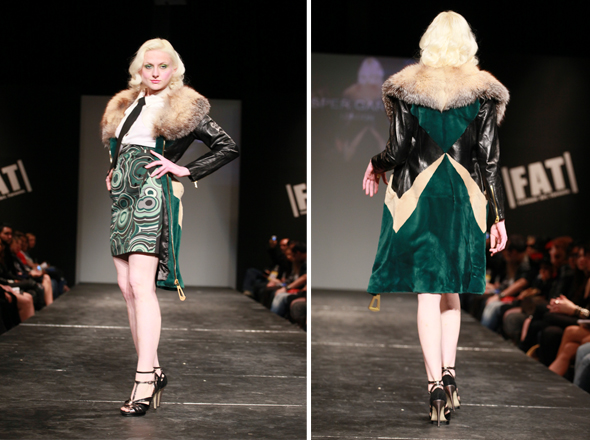 Garvida transitioned from luxe to glitzy, offering a selection of above the knee party dresses embellished with paillettes and glistening onyx beading - the finishing was perfect and gave the little black dress a much needed upgrade. 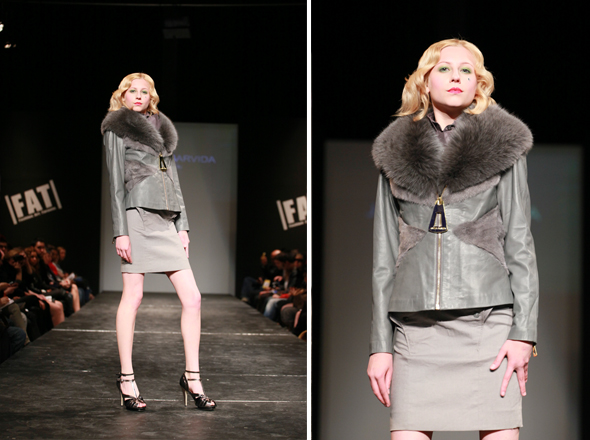 Unfortunately there is something so bittersweet about a Canadian designer who leaves his homeland and returns. Based in the UK, we cannot keep him, but having shown at FAT this year, it is only a matter of time before stockists take the plunge and grab some Garvida.

Amsterdam label Square Root of Two brought Toronto some dutch treats, including a grey sweater with fish gill detailing - zipped up, it produced an unusual shape but when opened, what remained was a sagging, unflattering mass. On a solidly built male model, it didn't flatter. Imagine what it'd look like tacked on a few extra pounds? Conceptually, it was desirable, but hardly wearable. 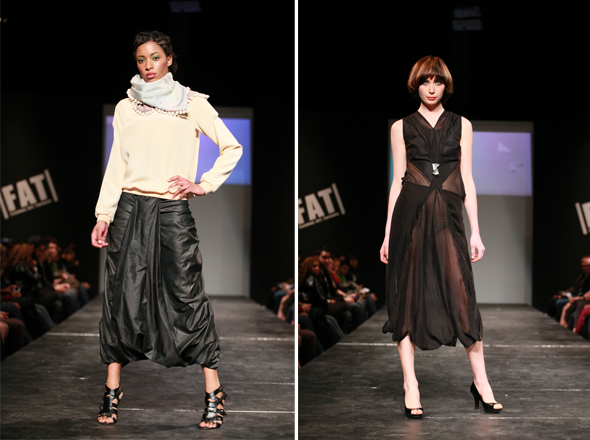 From the same ensemble, a grey pair of pants had button closures that wrapped around the ankle, creating an interesting shape. The look does not translate to formal wear, but what I saw was a casual option that adds interest out of a simple utilitarian taper. Finally, not another straight leg trouser or failed attempt at a drop crotch pant - something I can wear (well, the sample looked a little tight, but get me my size and I'll gladly rock them)!

As the women hit the runway, it became clear to me that shape transformation was integral to the plot. Charcoal harem pants were given a train of fabric that wrapped underneath the legs, tucked into the waist - again, an interesting idea, but the result was another mass of fabric that did not produce an elegant shape.

I was a fan of the forward direction of the collection and intrigued by the elements at play, but I believe that for the label to thrive, better attention needs to be paid to the male and female form.