When I received an e-mail from new local t-shirt line Chillovely, one magical word caught my eye: Culkin. Dare I believe it? Could there be a Macaulay Culkin t-shirt?!

After a few viewings of Party Monster, I'd yearned for my very own t-shirt bearing the likeness of my crush, ideally showing off some of his boyish flesh. But there was nothing out there for me. But now there is. 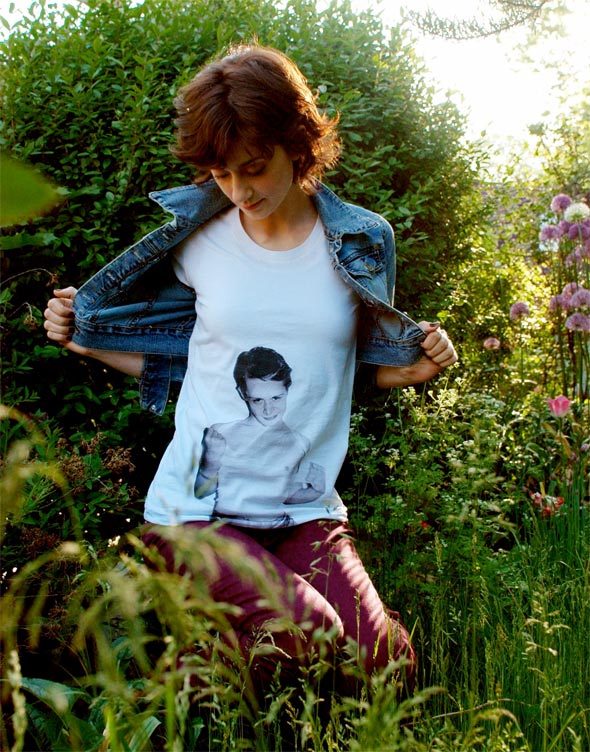 Usually I am skeptical of yet another hipster starting up a t-shirt line in between American Apparel shifts and planning their Fake Prom outfits, but local t-shirt line Chillovely burst away from the pack with a bang with its simple, chic white tees featuring everyone's favourite child star in a decidedly un-child star-like pose: ripping off his shirt. It's already been featured in NOW Magazine, and has been shipped off to other Culkin-cravers in Paris.

Designer Jori Jones shares my love of The Culkin, but that's not all she does. She breaks the mold of the world-weary, seen-everything hipster by being refreshingly super-nice and working at Sick Kids as a research assistant doing cognitive testing on kids with spina bifida (she's drop-dead gorgeous to boot: bitch!).

But it was her go-for-it attitude toward contributing to the t-shirt market that was another seller for me. "I'm determined not to have what-ifs," she said. "I went to the One of a Kind Show and was like, 'I can fucking do that!"'

Jones wanted to stay local, so she paired up with Parkdale boys at Bait Shop to craft her tees, which also feature the brand logo, as well as stag heads. She hopes that the tees will find a home in many fashion situations, whether it be someone cruising on their bike, lounging on a patio, or out at the bar.

As a girl with an eye for the perfect jeans-blazer-tee combo, she just wanted to help people spice up their top selection. "Quite honestly, it doesn't fill any hole in the market," she said. (More points for honesty.) "I just wanted to make a graphic shirt!"

So far the Culkins have been flying off the shelves at Sub Rosa and at her Etsy shop. But if people decide they don't need another graphic tee? "If no-one else loves them, I'll just have 24 extra PJ tops," she laughed.