L'Oreal Fashion Week continued with another seven shows on Wednesday, including a couple of Project Runway Canada kids, some old hands, and the freshest crop from Joe.

Anita checked out the daytime shows and had this to say:

Carlie Wong partnered with new sponsor LG Canada for her Spring 2009 collection.
Her models walked the runway carrying the new LG phones. Thank God they weren't
distracting. The collection was very safe with one standout look being the white
high-waisted pant and halter combo that made an appearance at the end of the show.
Among the dresses were many Le Smoking references which were done to varying degrees of success. More volume in the drapy dresses would have made them stand out to me.

While there were very few looks I would wear in the show, Carlie's colour palette
was fantastic: grey, white, black and grey-blue. The runway soundtrack was killer,
too.

I love Zoran's prints to death. They are designed exclusively by Zoran and are
digitally printed on silk and cotton textiles. The theme for his spring collection
was based on the Virginia Woolf story, Orlando. While I'm a big fan of the prints,
I'm not always enamored with his silhouette. They asymmetrical and draping pieces
didn't catch my eye and--what do you know--they didn't have prints.

Both Damzels in this Dress and Playdead Cult did something new which I loved. Reinvention is the key to progress and it was good to see both moving forward in their styles. Damzels added some prints and negligee-inspired items to their line-up. Playdead really surprised me with their cute print dresses. The show shakes up Fashion Week and gives it a more playful, rock-n'-roll edge.

Come night-time, the shows kicked off with Evan Biddell, and I sashayed into them clad in a cream vintage lace dress (a la Prada this season), flat purple suede boots, and my vintage ceramic pansy earrings, ready to be dazzled (I hoped!). 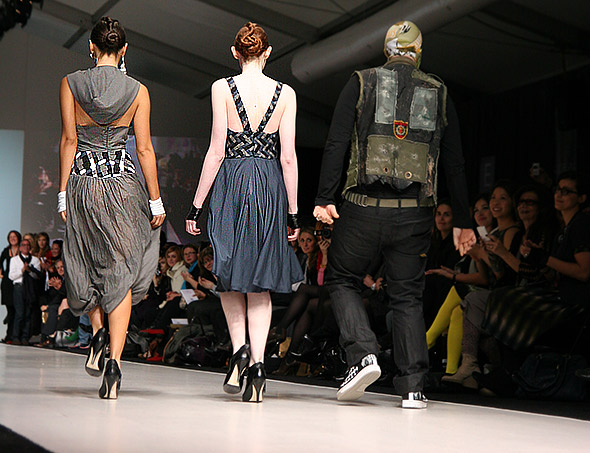 Last season, the no-holds-barred Biddell flipped the bird at the audience--what would he do this time?

The show was, surprisingly, preceded by a handful of ads projected on the screen behind the runway, which goes to show that even designer's with a fuck-the-man attitude like Biddell's need a little help sometimes in this oft-chilly fashion climate. Hence the models parading down the runway post-show bearing boxes splashed with the K-Swiss label.

Biddell's show itself started out on what I thought were its weakest pieces--a variety of skin-tight chartreuse-and-nude pieces in a garish print that looked like a cross between Pucci and Modesty Blaise. I worried that his rock attitude (which included denim skirts on guys) might translate into a slate of trashiness, but the collection took a turn for the classy. More restrained and feminine pieces started to emerge that still retained the line's signature edge and streetwear vibe.

Deep cowl necks, sheer fabrics, slinky hoods, and backless were everywhere, sexifying the proceedings. Biddell's models had a lot of confidence, which was nice to see, and were able to carry off the strappy swimwear and gauzy tops with ease. The show was one of the few that actually drew whoops from the cloud, and spontaneous applause, showing that the cult of Biddell is growing. 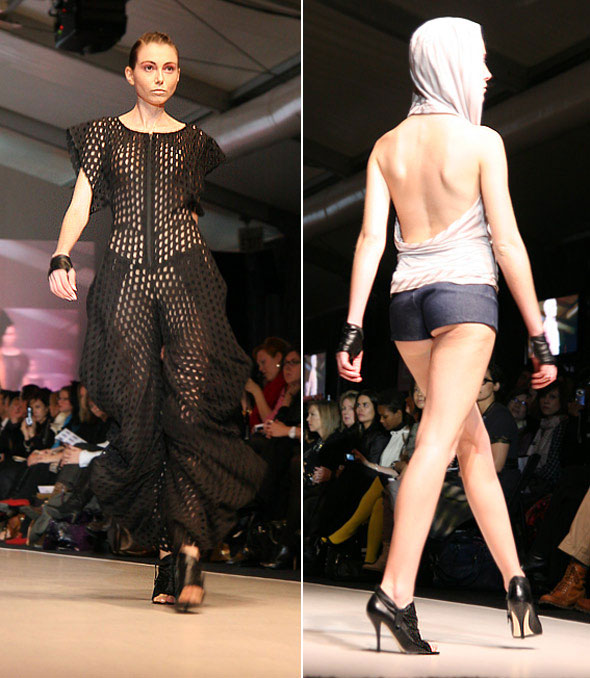 Hole-y, sturdy cotton was one of the base fabrics in the collection--it took the form of unstructured short jackets, ruched jumpsuits, and belted trenches that contrasted well with the skimpy swimwear and tight white pants. The contrast between high and low worked nicely, too, in a pair of hitched-up hotpants that were paired with a gauzy gray button-up with a black-and-white plaid collar. (Plaid--which shows no sign of going away--turned up again in the slightly rockabilly party dresses that either poofed in the back or were bubble-hemmed all the way 'round.)

Biddell didn't disappoint, and ended the show with a stroll down the catwalk in a mask crafted from the aforementioned Pucci-like material, growling at Brian Bailey. It was sort-of like his collection: toned-down, but still fun. 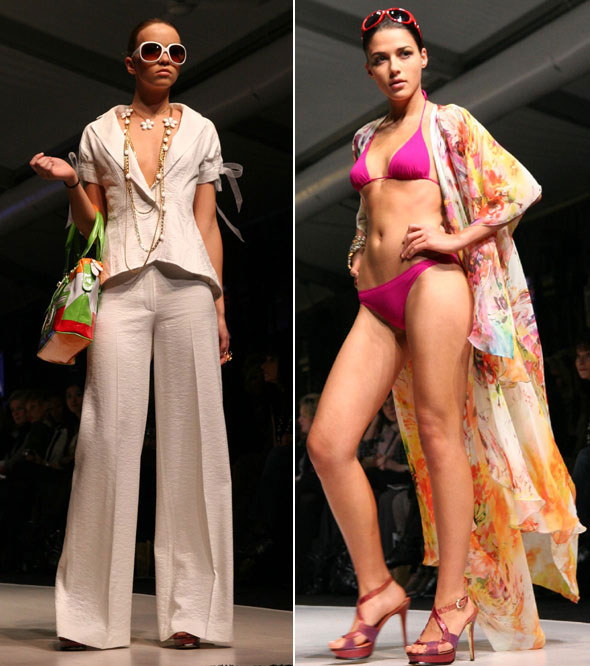 Thien Le's collection was all about romance, with the three f's in full force: flowing, feminine, and flowers. The floral trend of the past few seasons continues apace, with typical patterns replaced by lush close-ups, photo-like colours, and blooms outlined in gold and silver.

The clothes in the line definitely skew a little older: as fellow Web media passholder Janine Falcon of I Am A Beauty Geek said, the dresses will primarily live as fundraiser gowns and that's it. This provided a little bit of a disconnect within the show, as the young models used often seemed nervous, and weren't a great fit with clothes that required such confidence and poise.

There were plenty of pretty, garden-party-appropriate pieces, including a mint-green frock with silver lame flowers, a yellow-and-black party dress with a knife-edged black satin sash, a shiny silk shirtdress, a crimson raw silk skirt suit with a high ruffled collar, and a purple raw silk straight-necked fifties-style frock with black polka dots. 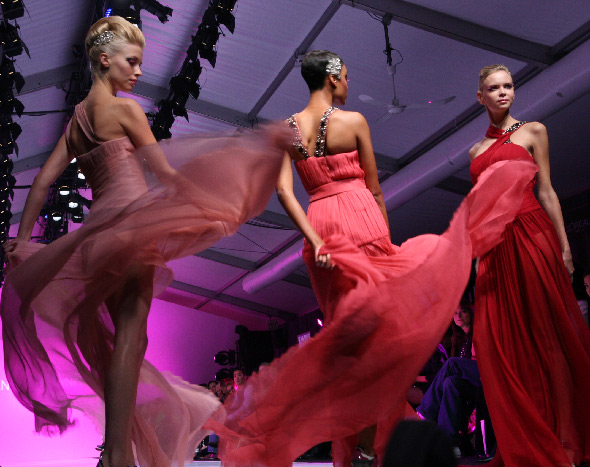 The rest of the collection was a little over-the-top, between the huge, flowing cover-ups, caftans, and sheer silks blowing everywhere. Granted, this is Thien LE's style, but it seems a little much--too much for realistic wear, but not crazy enough to elevate it to the level of sublime, weird artistry.

This includes the Indian-inspired sheer gowns, the giant Empire-waisted dresses in blowsy sixties prints, and brown leopard-print cover-ups. Then there were the pieces that went crazy-busy, like the floor-length dress that included sequins, silk straps, feathers, and a flash of green in the lining, or the gown with both a red bustier and reams of flowing blue leopard-print silks. Complex pieces are fine, but LE's didn't jive well here at times.

It was the quieter pieces that really worked, like the straightforward gorgeous, floor-length gown of lemon and seafoam silk that harkened back to Courtney Love's iconic Versace mermaid dress. Actress Tara Spencer-Nairn wearing a simple strapless wedding shift. Or the unique party-frock that combined a pert black bodice peppered with black rosettes that flowed into a sheer pink ball-skirt adorned with black peonies.

That's where the beauty lay--the simplicity. 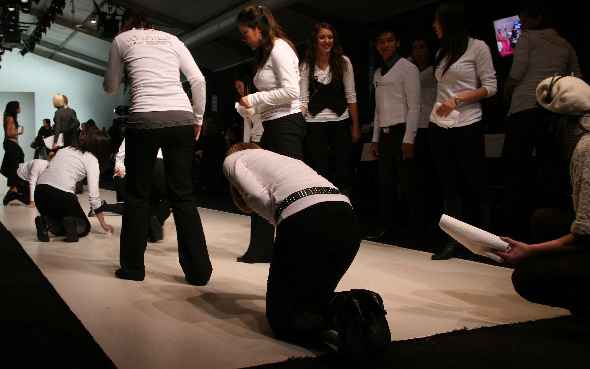 Wow. Wow. Wow. Andy The-Anh's show electrified me. I'd heard that his collections were fan favourites, but his show was the first show I'd seen that had everyone on their feet, clapping wildly, and cheering the tiny, dapper designer. They'd witnessed a show that was world-class, and they knew it.

It started with a sexy young fiddler, kicking off the show's soundtrack of violinized pop and rock hits. The dynamic sound was a good match to the show's look, which included models with curvy updos that resembled the head of a violin and rock-n'-roll pink eyelashes. And the clothes themselves? They were the perfect mix of flow and femininity, strength and structure.

It was a sexy-ass collection--Anh continued the Fashion Week theme of asymmetrical draping, with dress backs of mesh on one side and draped with jersey on the other. Backs were often bared, whether it was in a jumpsuit with a demure little tie across the back of the neck, or a flat-front shift that's all business in the front but bare in the back.

Anh could teach a master-class in refined sexuality. He wasn't showing a tonne of skin--well, some, anyway--but it was the effortless lines and sensual fabrics that oozed sexiness. Opaque sleeveless tops and blouses were adorned with delicately frilled, round chiffon blossoms, while jewels brought flash and fire to a simple white skirt or tank.

Then there was the 1930's-inspired suiting in rich satins and silks, including tulip skirts, pencil skirts adorned with flattened frills, colourblocked shifts, satin trousers, and ivory, bone-in peplum blazers that nip in in all the right places.

But it was Anh's final three pieces that brought the house down. The red, coral, or pink silk swathed tightly across the body and back, ending in a sheer long skirt that was offset by the chunky jewels lining the dress straps. 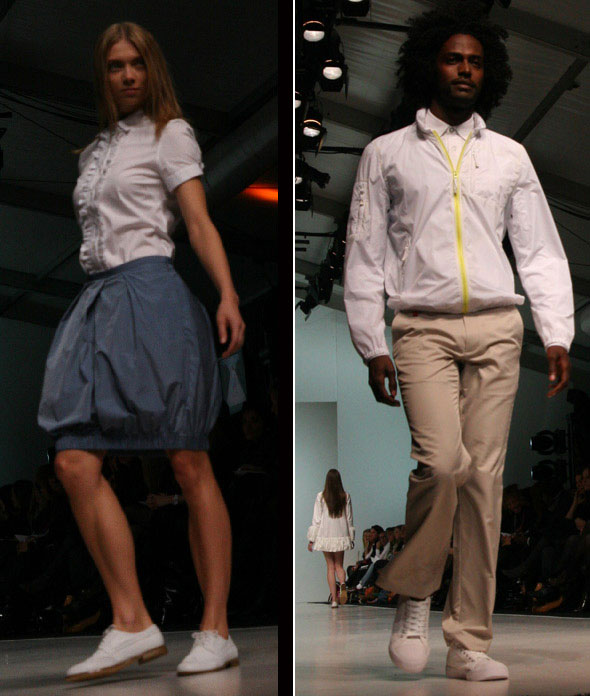 ...which is why the timing of the Joe Fresh Style show was so unfortunate. The show is usually a popular one--this season's star Canadian face was Taryn Davidson. (Due to the seating being changed around, I lost my seat in the Web media ghetto, but ended up lucking into a second-row seat behind Jeanne Beker. Sadly, the Joe Fresh Style models were all so wan and pin-haired that none stuck out, including the in-demand Davidson.)

But the clothes are, of course, mass-market, meaning that the fabric and cut quality doesn't hold up particularly well under the harsh lights of the catwalk. All the high-fashion-looking models in the world can't change the fact that the line is made of simple, cheap--albeit cute--pieces that are sold next door to your groceries.

The staging was fancy enough--including, oddly enough, clear totebags full of oranges, a portentous opening monologue, and the wide-eyed robotic waif-models that are en vogue these days--but the clothes just couldn't cut it. Especially after Andy The-Anh's utter triumph. 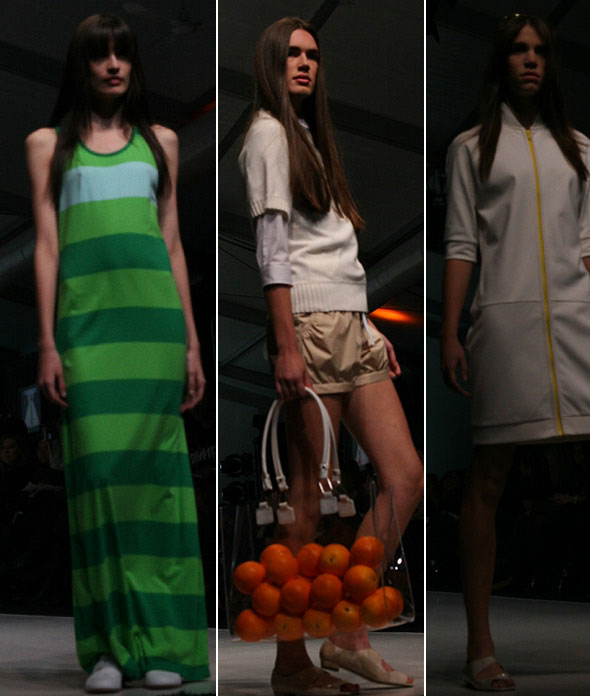 But, if you'd like to get a jump on your casual separates for next season, you'll be able to count on Joe Fresh Style for sporty navy shorts, ruffle-front blouses, shiny biscuit-coloured raincoats, colour-blocked shifts, and the ubiquitous jumpsuit.

There was, though, a super-cute series of synthetic bubble skirts with elasticized hems in a rainbow of fun spring colours that I'd definitely seek out the next time I'm...uh, at Loblaws.