Greta Constantine unofficially kicked off L'Oreal Fashion Week last week with their Spring 2009 runway show held at Circa. The show was a hot ticket and it brought out celebrities and designers like Chris Bosh, Natalie Brown, Wayne Clark and Fritz Helder and the Phantoms. The runway and stage were mirrored and the thought of models having to navigate that slippery, nerve racking runway crossed my mind. 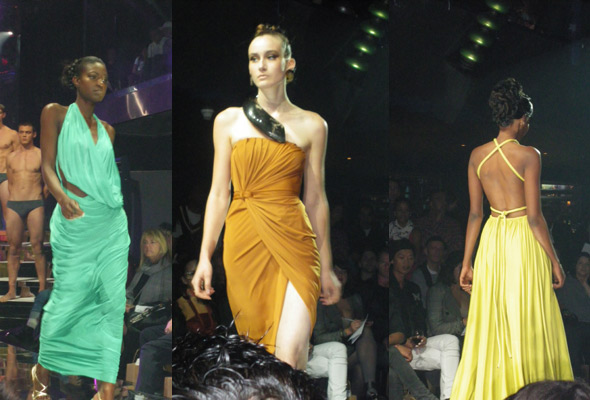 The collection was typical Greta - flowing Halston-like dresses and jumpsuits paired with draping Grecian gowns. It's very much on trend for Spring 2009 (as dictated through the runways of New York, Milan and Paris). While many of the dress shapes and fabric appealed to me, the pastel colours didn't.

The choice of colour palette influenced their choice in models and it was one the blackest runway shows I've ever seen. Most of the girls were black and the choice of pastels on dark skin is an obvious choice. Were they making a conscious statement a la Italian Vogue or following a dying trend? I read about their difficulty finding black models for their show. Many agencies couldn't accommodate them, which I found extremely interested considering this is Toronto. It seems that the industry isn't much different from everywhere else.

Unfortunately, the difficulty in their search was reflected in the models. Some looked very inexperienced and nervous which took away from the clothing. There were a few models that didn't get the idea of taking in the moment; they made sure they walked that runway as fast as possible without soaking up their moment to shine or posting sufficiently for the photographers.

Greta Constantine paired with accessory designer Dandi Masetre for a second season. She is influenced by nature and the accessories kick some serious ass. Too much in fact, as I felt the accessories overpowered the clothing.

Fashion week officially kicked off with Alfred Sung who presented his collection of bridal wear. I didn't attend the show (damn day job), but the images are up if you're interested. Bridal doesn't interest me and all the dresses tend to look the same to my untrained eye. I'll leave the reviews to the experts. 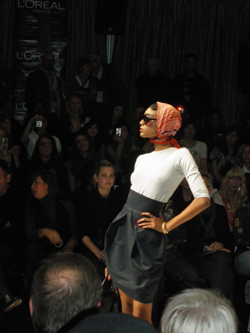 The Studio official opened on Monday and the first designer to present was Desperately Different by Katya Revenko. The Studio is a smaller runway space dedicated to showcasing smaller designers who want to participate in fashion week but don't need the logistics and cost of a large runway show. Images of the collection are now up on the website..

The final event of Day 1 that I didn't participate in was the Holt Renfrew Media Cocktail. This was due to a lack of invitation and wasn't related to time. This season's guest of honour was Tyler Brule, the Editor in Chief of Monocle. He faced the scorn of Toronto this summer when the city was left off their "25 most livable cities" list. If anyone actually bothered to look at the criteria of the list you could understand why Toronto was off the list, but that's another discussion.

Finally, I arrived at the tents ahead of the Pink Tartan show. This was my first invite to Pink Tartan after attending fashion weeks for a few seasons. The tents had a new configuration and it allowed for space for attendees (previous seasons were pretty packed). The lineups to get into the runway show were orderly and pain-free.

Pink Tartan started out strong for me. I was in love with the black and white colour combos and the Grace Kelly influence; the scarves and Hermes bags were a nice styling touch. Of course these styling elements were there to evoke luxury and sophistication. There was a lot of cute swimwear, halter one pieces, and bikinis. Things that strayed away from the black and white, I tended to lose interest in. The leopard print seems really out of place. Kim played with volume skirts which incorporated more wearable shapes like the pencil and a-line.

Here are my photos from both shows.