The Toronto Fashion Incubator New Labels Design Competition kicked off the Elle Show Thursday night at the Direct Energy Centre. The night was a far cry from last year's event. It was a slickly produced venture with a venue that didn't enforce separation between the VIPs and us regular folk. Instead of two rooms (which was the arrangement last year), there was a single elevated runway for all to see the show at the same time. There was seating for most everyone, which was a departure from last year. I chose to stand because I wanted to get better pictures and my seats were too close to the beginning of the runway.

Each runway show opened with a video presentation of the designer explaining their influences for the collection. I really liked this addition but I felt it needed some editing at times. There was also a video presentation after the shows about the TFI in general which touted their services, benefits and success stories. One of their major successes is 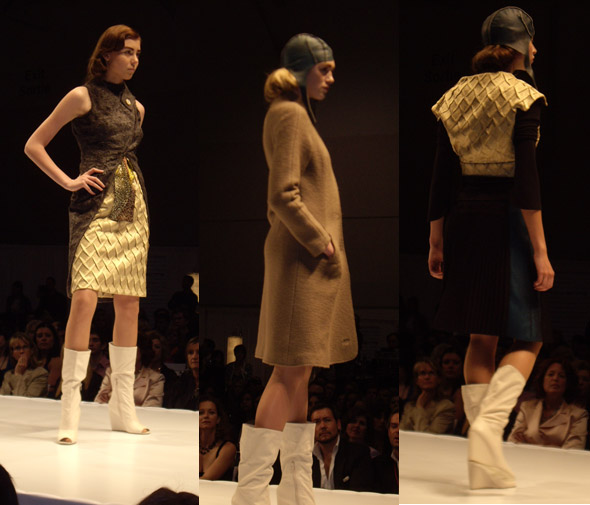 Arthur Mendonca who finally crossed the pond and showed in NYC for the Fall 2008 collections. As I was watching the video I saw a brief flash of the illustrated version of me. I laughed out loud because I wasn't expecting it. Danielle looked sheepishly at me and said sorry. She is a member of the TFI (as am I) and her work was incorporated into the video.

All the collections were top notch this year. I was really blown away by the show, and you could see that all the hard work paid off. Lara Presber was the first collection out. She was influenced by the work of Tamara de Lempicka, specifically her Auto-Portrait. The designs were very architectural, using folding for details. She also used different textures together to produce contrast. The work was very Art Deco and I loved the flirty pleated skirts that swing so seductively when the models were walking. 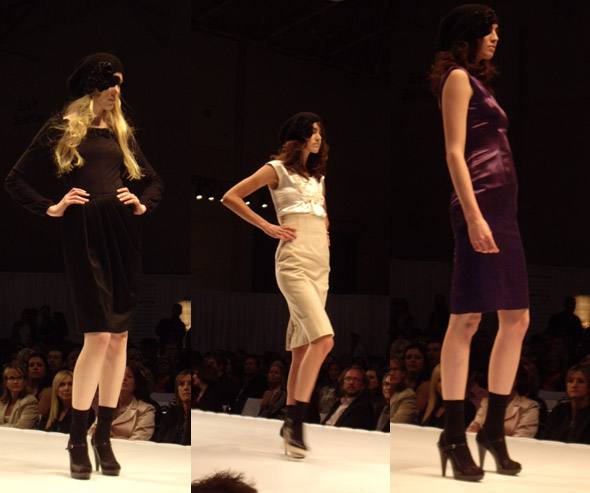 I heard Eugenia Leavitt of Eugenia Designs described as the person that loves rosettes. It was quite accurate because rosettes dominated the collection. I'm not a rosettes fan, so some things like the finale dress made of rosettes were lost of me. Their usage resonated with me in the hats, the rosette bolero, and the crĂ¨me bamboo knit dress that used a small amount of rosettes on the cowl neck. 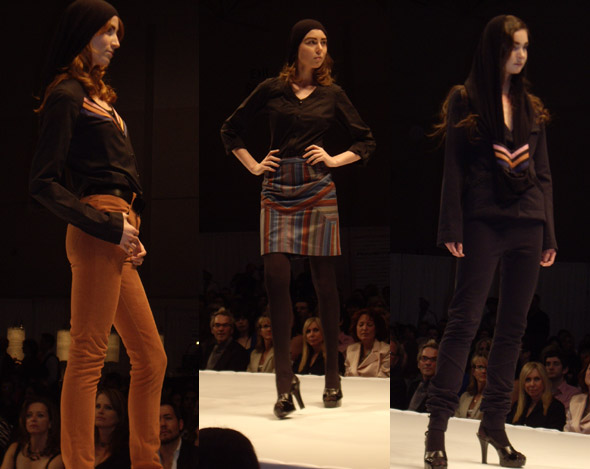 Adrienne Butikofer was influenced by the book "The Girl's Own Annual" from 1913. This Canadian book dealt with women's issues during the First World War and included pictures of National Service workers, one of which became Adrienne's muse. The collection stuck to the slim silhouette with skinny pants, high-waisted pencil skirts, and sky high heels. Heavy influenced by men's workwear, the palettes were black and a stripe print. I loved the Caninja Gyspy and while it looks great as a hat on women with hair, I love it as a scarf, personally. 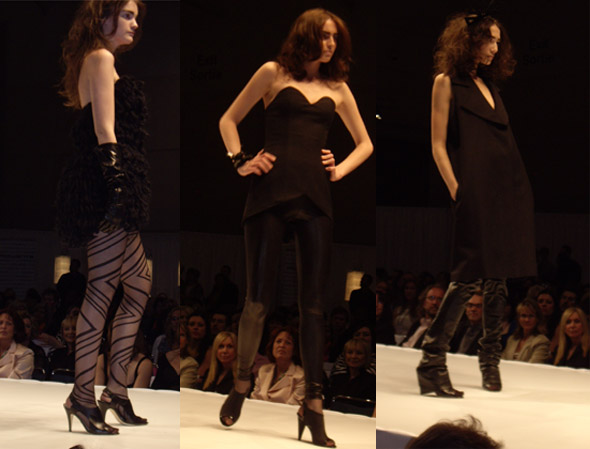 Ashley Rowe described Miss Rowe Fall 2008 as Rock and Roll meets English Dandy citing the Rolling Stones as her major influence. The collection was black and used textures and metallics to spice it up. Some of the looks were as skinny as Mick Jagger. I loved the slouchy skinny pants draping over heels and the skinny stretch pant paired with the wool bustier. Volume was added to the collection with oversized menswear style jackets, high-waisted pants and vests. Wool loop knits looks finished off the collection.

The official winner of New Labels never jives with who I select, and this year was no surprise. Eugenia Leavitt was selected the winner of the competition. There are other factors that go into the judging that I'm not privy to so it's not surprising. Her collection was my least favourite, but I don't think I'm her target market. While all the other collections were amazing, Lara Presber was my favourite collection of the night. Her's incorporated a lot of elements I love, especially Art Deco and pleated skirts. There wasn't many things to dislike but I wasn't a fan of the knit looks in Miss Rowe and a lot of the weak looks across the collections involved silk or sateen.