I was starting to feel rather jaded about Toronto fashion events until I walked into the Fermenting Cellar in the Distillery District for the first day of Toronto Alternative Arts and Fashion Week aka [FAT]. The space is incredible and it gives off an old school European vibe. I really enjoyed the diversity of the people in the crowd, who provided such positive energy to the event. It was quite remarkable. 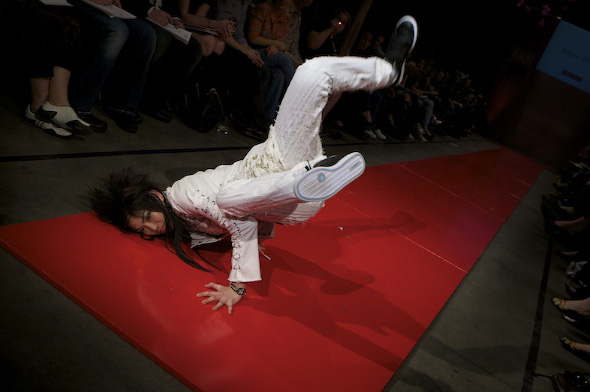 The 3rd season of [FAT] showcased over 120 artists in fashion design, visual arts, music and performance arts. Vanja Vasic, Event Founder and Director explained it best: "We're stepping beyond passive observation and into an interactive way of relating to fashion. It's about inclusion. Acceptance. Integration. We're knocking down boundaries and building connections and it's really because the community is working together. [FAT] is not only about showcasing seasonal trends. It's not about who's wearing what or who's sitting in the front row. Fashion goes deeper for us. It communicates how we relate to the body, how we build an identity and how we understand culture. Fashion is the way we live, the way we express ourselves. Fashion is a philosophy." 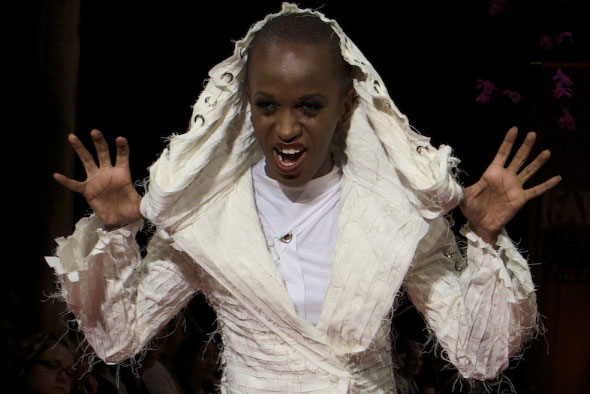 The fashion shows were presented in groups of 3 with bands and dance performances in between. Video screens projecting multimedia presentations, and art installations, rounded out the list of things for our viewing pleasure. It was a lot of fashion to take in a night - each group had 4 designers, each showing around 10 looks. 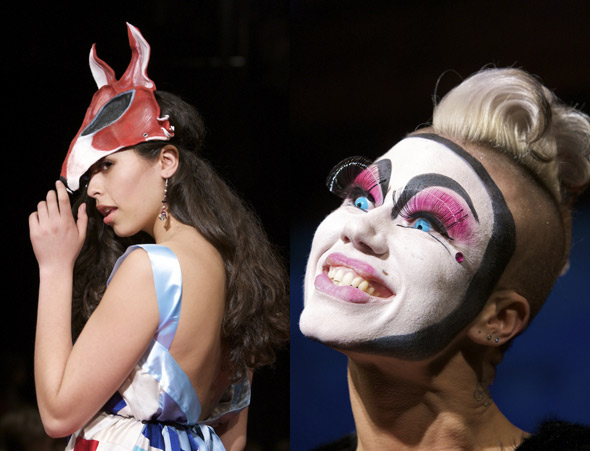 Each night a different theme was explored, and the first night was Transitory Space, which "explores the momentary, temporary and passing. This night delves on time, including influences from history, the present and the future, as well as fantasy, fairytales, different spaces in the mind and in dreams." This type of event attracts a lot of modern dance and [FAT] was no exception. While I enjoy modern dance, I just don't think that anyone will get it better than La La Human Steps. There was a group of women who performed in very sheer white garments. Girls, props to you and your bravery. 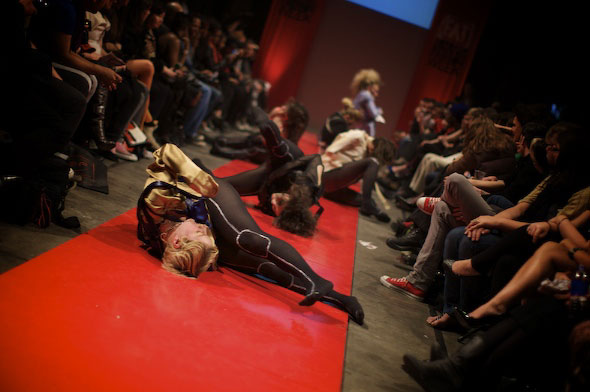 I managed to see 8 of the 12 designers that night. My friend Amie Scott surprised me with her collection. It wasn't her tongue-in-cheek take on fashion with severed arms attached to hems, the hamburger dress, or the pajama dress with the bum flap that got me. It was the camo print dress with full bustle that surprised me the most; I didn't know she had it in her. Magpie had some beautiful maxi dresses with hoods that I loved except for the crepe fabric. Get some beautiful silk jersey and we'll talk. Kirsty McKenzie's show opened with performance artist Lena Love, much to the delight of the crowd. I'm in love with the tight yellow flower print top and skinny pants that she sent down the runway. The bands were very good on day one - another huge surprise. [FAT] was turning out to be quite fun. 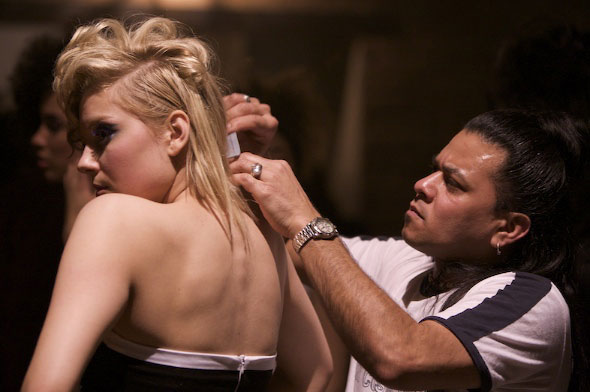 Day 2 followed the Urban Experiment theme, which "calls out to city dwellers. Expect a diversity of the city's scapes, different facets of urban life, mixtures of subcultures, and a fusion of distinct street trends." I made it in time to see the Deadly Nightshades movie about sustainable fashion. I remember seeing them at L'Oreal Fashion Week being photographed on the runway, but I had no idea it was all for their movie. It was great to see the contestants for the Now MyStyle show, who strutted their personal style in their own fashion show. Ryerson student Heidi Ackerman presented some great knits, and I saw a dress or two I wanted. Of course, I loved Krane's show even though there wasn't a body bag this time. His vintage inspired handbags are so beautifully constructed that I want to cry. Babu Et Moi ended the night with everyone dancing. The models grabbed people out of the audience to dance on the red runway. It was amazing to see the different groups of people acting the fool, including me. Good Times. 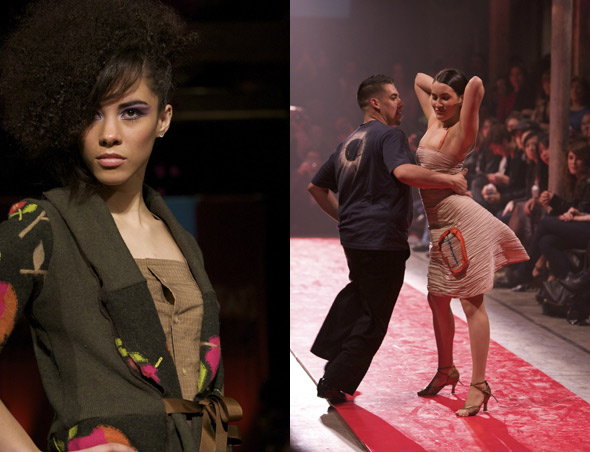 The theme for Day 3 was Conflict, which "showcases battles between opposing forces, disagreements and a clash between ideas, principles and people. The evening explores issues, which are incompatible and in opposition, such as conflicts within style, politics, violence, the environment, issues around gender, identity and the darker sides of fashion." This was my least favourite day, unfortunately. I didn't get to see any fashion shows because all the press seats were taken up and I didn't feel like fighting over one. I did see Satan's Candy who wowed the crowd with their fashion-influenced punk rock. I've seen these guys a few times before and they were bang on. It's funny - they always have a group of fashion bloggers singing along to Jagermiester or Fashion Up Your Ass at all their gigs. 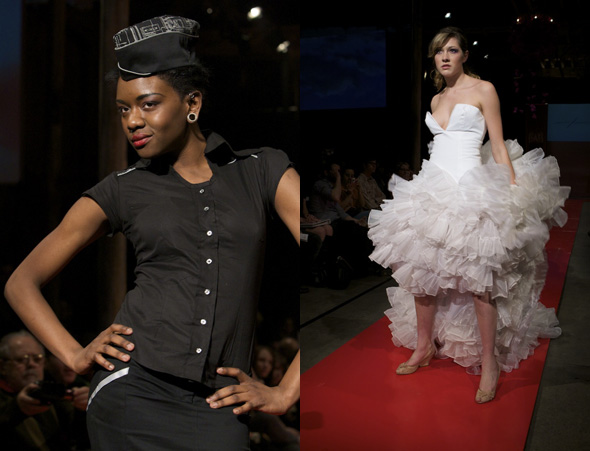 Overall my first [FAT] experience was fantastic, and I thought the show was well-organized and presented. I was pleased to see Fashion Television there covering the event. I was disappointed to see that a lot of the other media outlets didn't show up. I do think they should have assigned seating next time around; I really want to see the clothes. It's great to see so many fashion designers getting out there and presenting, because after all, it can't just be all about L'Oreal Fashion Week. A shout out to the wonderful models - it was so refreshing to see people with personalities on the runway, Thanks! 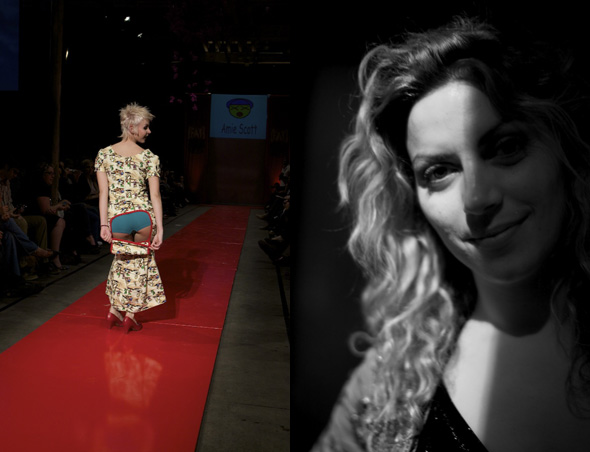 I want to extend a special thanks to Jon Currie, who took all the amazing photos you see in this post. He has plenty more on his photo webpage.