Day 2 started with me checking out some of the coverage of recent shows. I think the people I talked to about Biddell's show yesterday weren't sitting close enough. Shoddy construction was the topic and the fact that he flipped everyone the bird at the end wasn't taken well. That's right; the newbie designer decides to tell the audience, "Fuck You". Who the hell does that? And don't you need to be the next incarnation of Cristobal Balenciaga to get away with that kind of behaviour? One particularly scathing review made me laugh out loud.

Everyone was fawning over Coco Rocha and I have to admit that I loved watching her at Joe Fresh. She put on a lesson for all the other models that night in three exits and a finale.

I arrived at the tents around 5 and I was itching to hear everyone's opinion on the day's shows. Not much was said about LEWD, Hibebe and Evan & Dean. I did hear rave reviews for Preloved. It's amazing that they were still able to show after the fire. That is some serious fashion dedication. Talenti Moda Milano which featured Italian fashion design students was apparently really good. 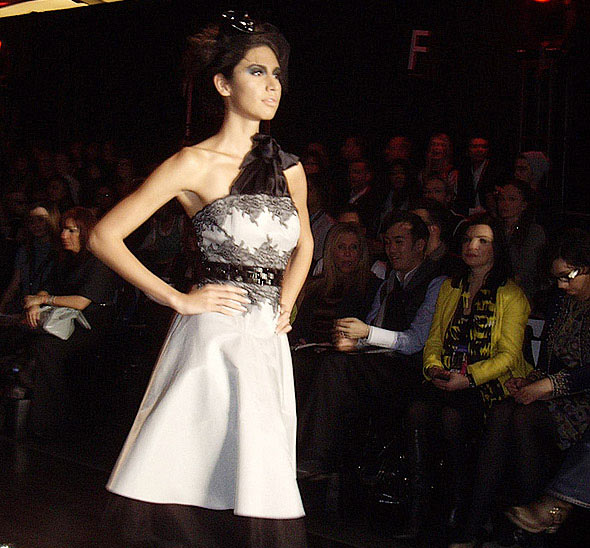 I arrived to see Lucian Matis, the second of the Project Runway Canada alum to show. There were no visible threads or puckering zippers at this show. It was an exercise in detailing and Lucian make us yearn for everything beaded. The work was amazing and it turned out to be more balanced than I expected; it wasn't just gowns. I love gowns and I loved the tops and the wide-legged pants the most. The collection was pretty damn good and I wonder how much more over the top he would have gone if he had the $100,000 instead. I only had two problems; the models' makeup and a particular model's walk that was very painful to watch. To be fair, I think the shoes didn't fit.

Danielle posted a great article where she compares and contrasts the styles of Biddell and Lucian. It's worth a read.

There were two By Invite Only shows that I wasn't good enough to attend. Seeing as there was no chance of seeing Coco in any of these shows, I didn't bother crashing. In retrospect, if I knew that Catherine O'Hara was walking, I would have changed my mind.

I missed NADA's spring collection in the fall of last year, so I was looking forward to Fall. The Dynasty themed collection started with a take on the opening credits of the 80's soap opera and instead of Colorado it was Toronto. As you can imagine, the women were styled as Krystle, Alexis and Dominique, taking the good stuff from the 80's like power dressing, zippers and colour blocking, and leaving out the bad stuff like massive shoulder pads. I was salivating over one blue-bordering-on-purple dress in the collection that had leather detailing on the shoulders, waist and arms. 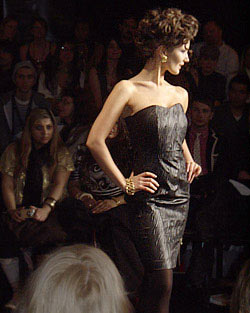 Suzie Love was all over fashion week once again. Her jewellery could be found at Lucian's and NADA's shows.

Bustle was the first of two menswear collections on Day 2. They always put on a great show even if I don't always agree with some of the designs.

This season was straight up suits. Some of the colour schemes were great and I even enjoyed the white coats. I didn't enjoy the two tone black striped suits and would have loved the purple pin-striped suits if I hadn't seen my friend's bespoke version in almost the exact same fabric. Bustle's didn't measure up. It was made especially for him so maybe it's not fair to compare the two but I can't help it. I also like the bespoke suit's long and lean silhouette where Bustle was into the more muscular look. The collection needed editing as I saw identical looks coming down the runway many times over. We did get a major treat as Stacey Mackenzie took the final exit to a cheering crowd.

Philip Sparks was the last show of the night. After two seasons of off-site shows, he finally came to the tents. I have to admit, I like the intimate nature of his previous shows. I had actually previewed this collection a month before so I knew all the looks. Philip has incorporated some fur into this season and uses it for warm mitts and jacket collars. Philip and I both share a love of the long and lean silhouette, which he accentuated with stovepipe pants. Philip knows how to edit people.