One spray-on tan, please. For delivery.

Toronto's beaches aren't exactly hospitable in February, and in the middle of the winter, there's one thing many of us don't have - a tan. Have you ever found yourself thinking "I want to look like I have a golden tan, quickly, and I want IT to come to ME, now!" No? Me neither. But apparently there are enough people out there searching for a fast, inexpensive, fake tan delivered to their door to warrant a company that does just that.

For a fee, cleverly-named endeavour "Tan on the Run" (the only mobile airbrush tanning company in the Toronto-area) comes to you, sprays you, and leaves you golden.

Whether they're ahead of the curve or they have a failing business model is uncertain to me. What is certain, however, is that their web page is good for entertainment.

Aside from the many awesome photos, they also provide lots of great suggestions and facts about tanning. Did you know, for example, that when you use UV tanning beds you can get spider veins "as the blood in your veins actually boils"? Did you know that "radiation from tanning beds is 5 times the intensity of the noontime sun at the equator"? Did you know that spray-on tanning is "celebrity preferred" and that special spraying techniques can add slimming effects or muscle contour enhancement? 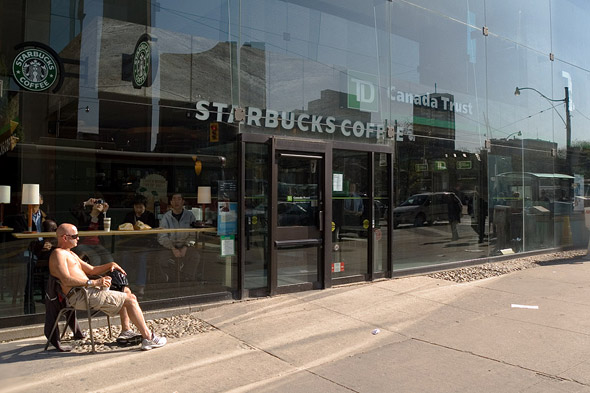 I guess I can understand the desire to get a base tan at a salon in Toronto in the winter before heading off to a sunny location (to prevent burning), but that's where it ends for me (and where a spray-on tan fails). Furthermore, a bronzed face and body is not something I particularly look for in friends, mates, or colleagues.

Is getting a visit from a mobile spray-on tanning service company the best thing since sliced bread? Personally, I'd rather be pale and enjoy that bread as part of a sandwich. I've never in my life aimed to get a great tan. Within a few days of warm weather sun, I usually get enough exposure to natural sun that I develop colour. I've never set foot into a tanning salon, never used oils to enhance the skin-cooking process, and never worried about unsightly tan lines. Maybe it's because I'm a guy, and/or because I don't put much emphasis on over-the-top, superficial, outward appearance.

If this service is up your alley and you do elect to order delivery on a rainy day, don't forget your umbrella. And be prepared to avoid the use of band-aids, bar soaps, perfume/cologne, and dull razors. And whatever you do, avoid heavy sweating.

Other temporary things the company provides include fake tattoos and eyelashes. You can even host a tanning party for your "girls night in", or have them show up to give tattoos to all the kids at your child's birthday party. Because nothing says fun like 3-year olds getting skull and butterfly tattoos before they pin the tail on the donkey.