I'm going to cut to the chase - I don't like the holiday season. I'm a bit of a grinch. The only two things I do like about the season, however, are a great dinner made by my father and the Holt Renfew holiday windows. It sounds silly, but it's true. The Bay at Queen and Yonge also participates in the holiday window tradition, but I'm not a fan of their window treatments. Staring at mannequins in beautiful clothes is more my speed. It's like a giant diorama for fashion junkies like myself.

I loved last year's windows, which depicted a decadent party complete with bottles and bottles of Moet all over the place in various sizes. This year's theme is couture, something that the fashion world has been revisiting all year. Dior celebrated its 60th anniversary and Valentino its 45th during the spring couture season.

Each set of windows depicts a different stage in the couture lifecycle; the lone designer sketching, the numerous fittings, the backstage madness before the all important runway show and the editorial. The white backdrop and props were in stark contrast to the vivid jewel tones of the clothing. The display wasn't as ostentatious as last year; there were no $200,000 dresses by Dolce & Gabanna on display. I do believe fashion lovers will melt over this year's offerings. I personally like the Prozena Schouler coat.

At the unveiling party the Queen of Soul, Aretha Franklin belted out a short set of 5 songs. It was amazing to see a living legend perform. She joked about how cold it was and mentioned that she wanted to pick up a handbag after the set was over. 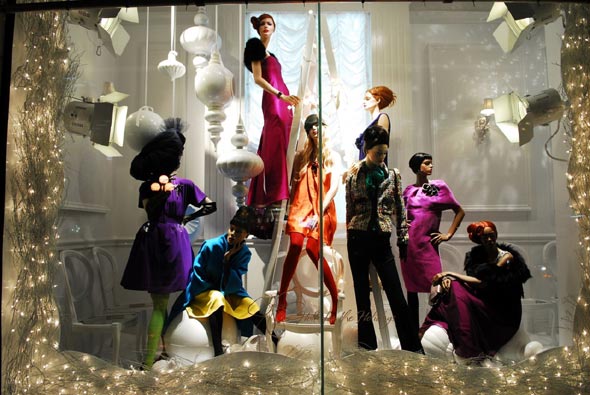 If you can't make it down to Bloor Street to see the display yourself, you can view a large collection of images at the flickr account of mannequindisplay.com. James, who works as a retail display photographer, takes the most amazing photos of window displays. Viewing his slideshow is like being there in person. You can also see my meager photos; I am humbled in the presence of a true professional. James has also taken some pictures of The Bays windows for your enjoyment.