It was a really clever use for a bodybag. I almost didn't attend the Krane Installation at the Edward Day gallery for Local 416, a Volvo project. I didn't expect to see a presentation; Juma, who was featured two weeks ago, had a trunk sale. It was a last minute decision to attend and I didn't regret it. A bodybag was incorporated into the presentation. The crowd ate it up too.

It's always refreshing to see a men's fashion show. I get a kick out of the male models and their runway style. Two twins, Nicolas and Daniel Pilaprat, stomped around the Volvo C30 that occupied a large part of the gallery in a square shape. (Krane Bags hung from mannequin parts surrounding the car). When the robotic-like twins turned, they stopped at 90 degree intervals for the briefest of moments. Their uniform consisted of a Krane motorcycle jacket, jeans and shoes all in black, paired with a white t-shirt. The twins wore the same outfits but changed bags for each runway pass.

The monotony was suddenly broken by the twins running out of the staging area in balaclavas towards the car. They opened the trunk and piled Krane bags into it. It looked suspicious and the crowd was wondering what the hell was going on. I thought they were demonstrating the roominess of the new C30's trunk. They ran back to the staging area and returned to the car carrying a creme bodybag between the two of them. The bag was loaded into the car and they ran off. Contained in the bag wasn't stuffing but the designer, Ken Chow. He emerged with a big smile on his face to an enthusiastic crowd. 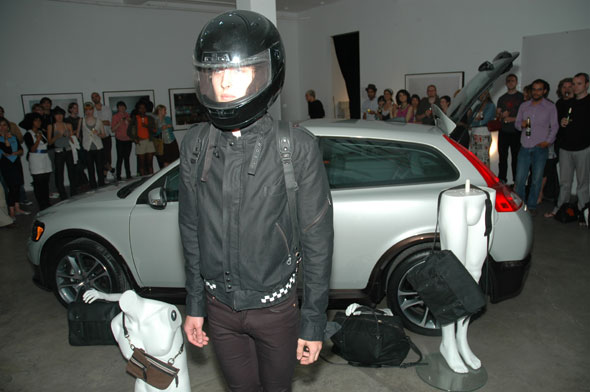 It was brilliant, unexpected and a lot of fun. Tommy Ton was the stylist and composed the choreography and direction of the piece. He unveiled a different side of his work that I didn't think was there. Needless to say I was impressed.

Krane bags are perfect for the man looking for a functional and stylish handbag. Heavy duty waxed cotton is combined with leather accents on tradition designs like the briefcase and messenger bag. The bag collection is quite extensive and should satisfy all tastes and functions. Krane motorcycle jacket was the only clothing item shown, but Ken makes a variety of other styles. As with the handbags, waxed cotton and leather accents play a big part in his jacket designs.

Ken Chow studied menswear at the prestigious FIT in New York and interned with Marc Jacobs and Alexandre Flokhov of the defunked Cloak. He started Krane in 2004 and it has quickly gained attention worldwide.

Krane can be found at: