Translations, an exhibition by Marina Dempster

I love receiving visitor email at I want - I got. They vary in subject, a store or product tip, kudos or a sale listing. In November, Marina Dempster emailed me about her artwork on exhibition at the Bata Shoe Museum. I thought this would make a great post and now I had an excuse to get my butt to the museum. It's true, until this point I have never been to the museum; some shoe fetishist I am. The story of my first trip will be saved for another day; this is about Marina and her art.

Translations is an exhibition of Marina's sculptures. She creates beautiful yarn sculptured shoes. The pictures don't do the work justice, the exhibit in person was breathtaking. Marina has developed a contemporary artistic interpretation of the Huichol tradition of yarn painting. The exhibition will end on Janunary 19, 2007, so there is plenty of time to check it out. The museum is free from 5pm - 8pm on Thursdays and admission is $8 dollars for adults any other time. I got talk to Marina about her art and I've posted that discussion for you. Her answers are so detailed and informative that I couldn't bear to edit them.

How did you get starting in the art of yarn painting? 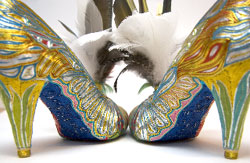 About eight years ago, I met and befriended a Huichol artist and shaman, Alejandro Lopez Torres, at the Gardiner Museum in Toronto where I informally acted as an interpreter helping him to communicate why he had traveled from his remote village community in the Sierra Madre mountains of North Western Mexico to share his art and the tradition of yarn painting. (The origins of the Huichol people is uncertain though it is likely that they are related to the Aztecs and may have been driven high into the Sierra by the Spanish conquest in the early 1500's.) The Huicholes call themselves "the healers" and believe that the perpetuation of life and the protection of nature's creations is their time-honoured responsibility.
For centuries they have performed ceremonial rituals they believe heal the Earth and keep nature balanced. Sadly, however, the traditional Huichol culture itself is in under threat, vulnerable to the "modern day conquest" (land invasion, tourism, loss of autonomy, poverty, disease, social ills, missionaries/Spanish schools etc.).Yarn paintings, for the Huicholes, serve a necessary healing and storytelling function (particularly given they have no history of a written language but rely on 'heart memory' and psychic communications with ancestors to pass down their history and beliefs), but are also now highly valued as a sellable art integral to their survival. I think that at this time, when global environmental concerns are very real, there is much to be learned from the Huichol culture, which is grounded in the concept that if humans work for nature, nature will work for humanity. I hope that in some way using this technique in my artistic practice has been an opening to cultivating communications and learning between cultures.

Can you give a brief explanation of the yarn painting process? 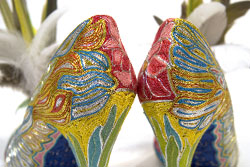 I immediately fell in love with the smell of pine resin and bees wax called "cera de Campeche". My process begins with covering my chosen form with the wax mixture by warming and softening it in the fingers and massaging or spreading it on the surface like a layer of skin. It is at this stage that I begin to develop a relationship to the form. This covering is then embedded with yarn or beads with the deliberate pressure of the fingertips, until the entire surface of the object is 'implanted'. I benefit from the labour intensive and contemplative nature intrinsic to this
process, and feel rewarded by the gradual filling of space. The pieces are abstract narratives and improvisations relating to the considerable time period over which they are created, in other words personal mappings or tracks made while working through periods of transformation. Once introduced to the simple technique of 'yarn painting', I was literally embedded. What began as a series of small paintings morphed into a series of sculptures (using the term sculpture in it's more zoological sense of the word "a natural indentation or other marking on a plant or animal"). I was attracted by the challenge and commitment larger forms presented me with and the added dimension the human-like forms added to my earlier paintings.

Choosing shoes as my starting point, more recently, seemed a logical extension of this previous sculptural work, which always used forms relating to the body and sensory perception as being something that unites us. The first 'wearable' pair came out of a solo artist residency I did in Surrey, England at the Farnham Maltings, last January. I have come to be intrigued by the idea of how we inhabit shoes - shoes being closely fitting protective exteriors (like the shell of a lady bird or carapace of a tortoise) as well as being the sensory receptors through which we transmit information to the brain about the terrain over which we travel. The confounded high-heel shoe, while being everything that pinches, elevates us in inches, and inevitably makes us more sensible of the ground we walk on. How to navigate sewer grates, lawns and other potentially perilous paths on heels? I wanted to make shoes that would make me feel empowered and more connected to my truer or stronger self - power shoes! I see my transmuted shoes as literal fetish objects treasured for their potential magical powers or for being inhabited by the spirit of their own poignant narrative. I suppose shoes have always been as a means of expressing one's cultural and artistic self...what seems to have resulted in my work is a hybrid of multicultural ethnography meets haute couture. 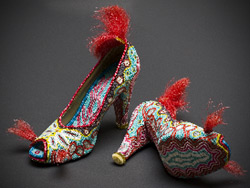 Where did you study art?
I have lived mainly in Canada since the age of 3 (aside from a number of extended travels or time away for pleasure, family and my double life as a photographer). I was born to British and French parents in Mexico City. My parents and grandparents lived in Mexico for a number of years so Mexican culture has always played a significant part in our family lore and experience. Perhaps my hybrid artistic practice is born out of my own hybrid cultural identity. I have always considered myself equally Canadian, French, English and Mexican among other things! I completed a first class honours cultural studies degree at McGill University and then fled to Mexico for a year to reconnect with it and studied art at the Bellas Artes in San Miguel de Allende while working and studying spanish at the international youth hostel and having the time of my life. I have had no formal art education but have always been an artist who explores all sorts of mediums. I would say that there has always been a lot of artistic passion and discernment in the family, however scattered it is, as we all seem to be artists of one form or another. (My brother Alec Dempster (http://www.alecdempster.com), is a visual artist/musician/publisher who returned to Mexico several years ago and is now permanently settled in Veracruz.)

Do you accept commissions?
Yes. I would love to do more. The collaborative process inevitably expands my field of vision and leads to delightful surprises.
Art for me is about sharing stories (the joyful, beautiful, humourous and painful) so I would love to be able to celebrate and immortalize other people's narratives more often in such a hands on way. Feels a real privilege and a meaningful adventure. This approach is paralleled in my work as a professional photographer. It is a wonderful feeling when someone trusts your sensibilities, process and vision.

After your run at the Bata Shoe museum where and what is your next exhibition?
After the Bata run end on January 19th, i intend to get back to work in my home studio to continue building on the shoe series whilst exploring possible exhibition spaces in Europe.

If you are interested in commissioning Marina you can email her. Contact info can be found on 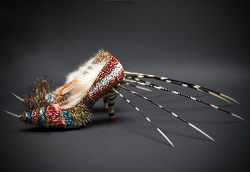 Another exhibit at the Museum, Icons of Elegance is finishing on January 7, 2006. If you need a quick history lesson on the powerhouses of 20th century shoe design, be sure to check this exhibit before it is over.