Vidal Sassoon Academy in Toronto is the place to go when feeling adventurous and/or broke. That's because the Academy, which is always looking for hair models, will give you a free (or almost free) cut in exchange for control and about three hours of your time.

But there's much more to Sassoon that we often don't see when popping in and out for a quick new 'do. So I dropped by one afternoon to sit in on one of the classes, and see if I could glean what all of the world-renowned fuss was about.

Creative director Nhi Tran meets us in the reception area and leads us up a narrow winding staircase, stopping on the cutting floor. "We have 10 stylists here," she says, pausing by a male stylist refining a geometric-looking bob. "And it is some of these stylists who teach in our Academy." 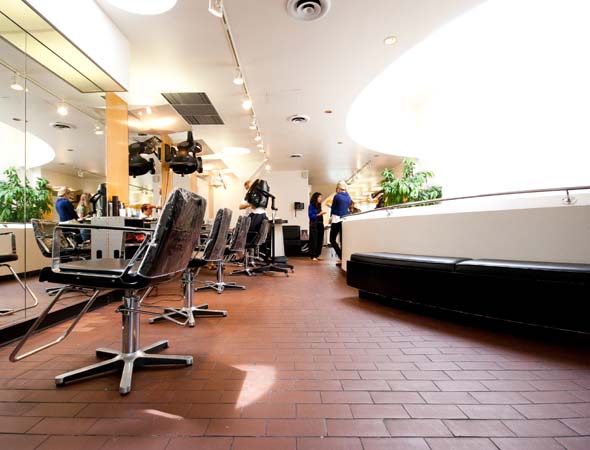 Nhi teaches a class herself, one which I will be sitting in after the tour. But as we climb yet another set of steps up to the colour floor, she takes the time to tell me about the man--the legend.

"Vidal Sassoon really revolutionized hairstyling," Nhi begins. "You know, at that time, women were dressing their hair; they were teasing it, molding it into shape." 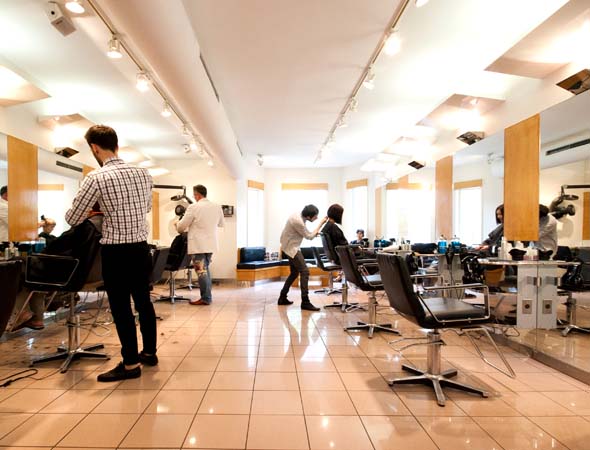 I was beginning to think Nhi was just referring to last season of Jersey Shore, but I decided to keep my mouth shut. "But then Vidal came along, and he spent nine years experimenting with geometry.

He took the modernist movement, and applied it to hair. Now it was about the shape of the cut, meaning you wouldn't have to tease it or anything after."

I would hear this same sort of rhetoric about shape in Nhi's class a little later. That afternoon, she was to teach the final class in a five-day ABC Cutting course, one of several advanced courses offered at the Toronto academy. The courses are available to already-licensed hairstylists as a way to brush up skills or build on pre-existing techniques.

There are Sassoon academies in the UK, USA, Canada, and Germany, and this five-day course in the Toronto Academy--the only one in Canada--was costing students over $1,400, plus 13%t HST. 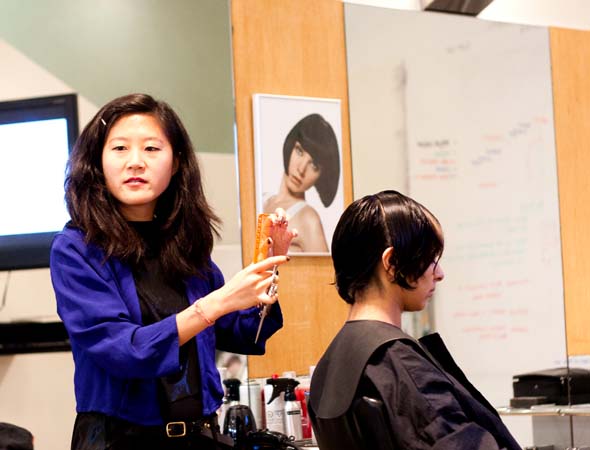 But unlike the classes in London or California, this afternoon's class wasn't planned for a group of up to 32. Instead, there were just three students--two from Toronto, and one who had flown in from Chicago--there celebrating their last day by uncorking a bottle of wine and settling in to watch Nhi remedy a model's head of hair.

The model had committed what surely must be the most vile and heavy-handed act in the eyes of the professional hair stylist--she had cut her own hair. So Nhi had paused the instructional DVD playing the background to outline her plan of attack. 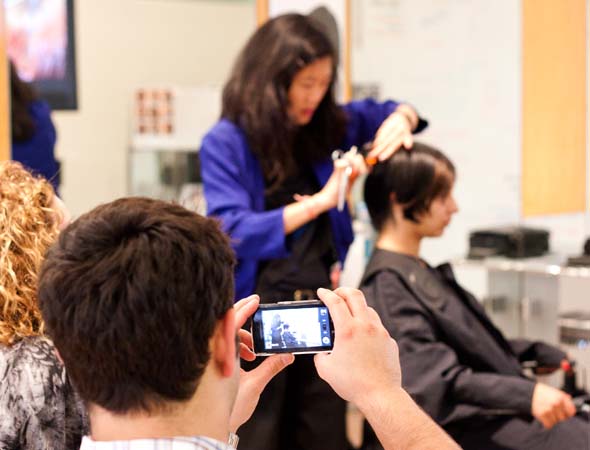 "Let's analyze her hair," Nhi says to the students, pulling up a strand. "She's been cutting it, and her line here," she says, motioning towards the model's nape, "is quite vicious."

The group begins to discuss, talking about the model's jawline, face shape, the idea of "flirting with circle and square" and something called "internal graduation." Nhi takes her time sectioning, and then the cutting begins. 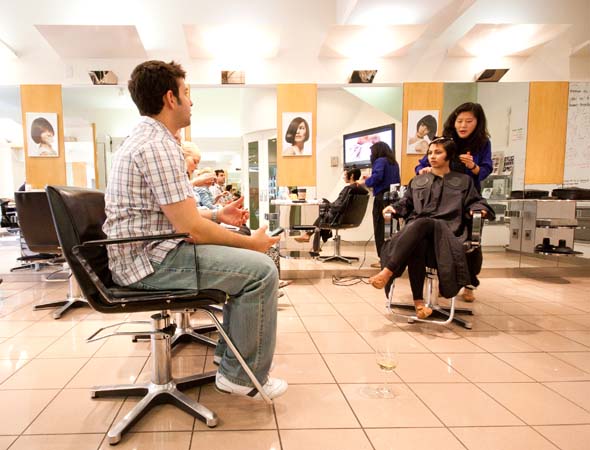 I'll admit, before arriving, I let my imagination (and prone-to-stereotyping mind) run wild. I had envisioned an uncomfortably quiet classroom where a woman with a severe haircut (and possibly an English accent) ran the program like some sort of anti-perm boot camp. But the atmosphere was actually quite the opposite.

Between moments of instruction, Nhi and the group chatted about what the student from Chicago should do on his last day in Toronto (consensus: Steam Whistle tour), their own individual allegiances to their comb of choice (apparently the red comb has wide teeth?), and gawked over a select pair of shiny new scissors.

They also discussed dilemmas that come up in consultation, such as when the stylist knows a certain cut will look great on a client, but doesn't know how to convince her without seeming pushy.

"Remember," Nhi says. "Often clients are coming to you for your professional advice." 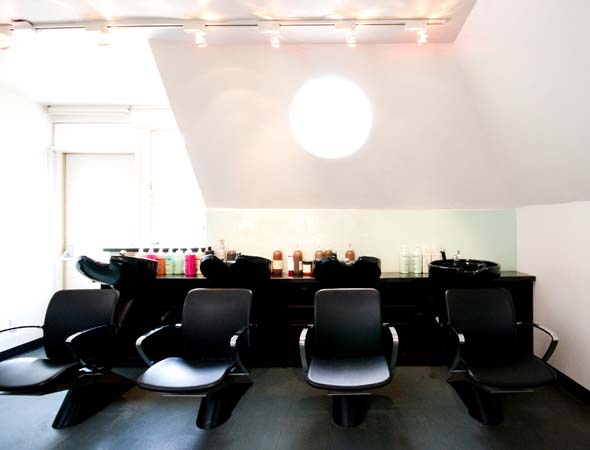 The class winds down with a bit of a love-fest, as the students discuss returning to their workplaces. "I feel like I can go back and cut to my full potential," one says.

"This really addressed so many things I wasn't sure about." Another one says he knows his colleagues will respect him a little more since they know he has now completed the Sassoon program.

Of course, since I'm not part of the industry I don't think I'll be able to truly understand what it means to say you've been "Sassoon trained." But it does seem to carry quite a venerable message, one that's apparently understood universally (quite literally).

And for the rest of us there's another message that seems to resonate fairly clearly--that is none other than: Free Haircut! 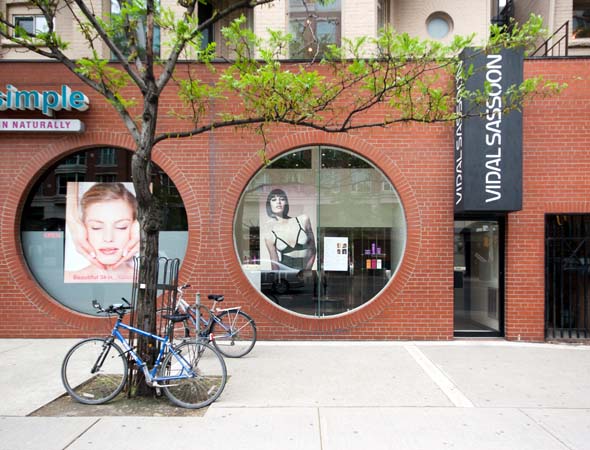