Back in the fall of 2003, German Professor Jorg Karger gathered together 503 people on bikes to set the Guinness World Record for number of bike bells simultaneously ringing. Saturday at noon in Yonge-Dundas Square, environmentalist/children's entertainer Chris McKhool will mute the professor's bell forever. Hopefully.

McKhool's record-breaking attempt will aim to raise awareness for environmental issues (aren't we all aware by now?) It will also be a hell of a sight, to be sure. Plus, McKhool will be able to fulfill his life-long dream of cracking a record.

"Ever since I was a little kid, I poured through the Guinness Book of World Records, fascinated by the incredible achievements that we -- everyday, ordinary people -- can make," McKhool has been quoted. "What better way to get the message across that each of us can make extraordinary things happen in our daily lives -- and what better cause than the future of the planet itself?!"

The lauded children's singer songwriter will perform his main act, the "Earth, Seas & Air" family concert. The finale will of the show will feature Mckhool's new composition, "Walk and Roll" - a catchy number that encourages listeners to ride their bikes (the cue for his target number of 600 participants to start ringing), strap on some roller blades, or use your feet to get around.

Here's a bit from the new song, to whet your sing-along appetite... 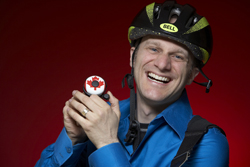 We can make energy from water, wind and sun
Bio gas and people power get the job done
I feel chills when I'm trying to be
A more sustainable, renewable, reusable me

(You can actually download the song here, which I recommend... it'll put a smile on your face, whatever your age, I promise.)

The Samba Kidz will accompany McKhool for the performance, leading a bike bell samba rhythm, which should be interesting to hear with 600 "drummers". McKhool's world/jazz/flamenco violin music project, the Sultans of String, will also make an appearance.

If you're not able to make it out tomorrow for the concert, but still have the itch to hear an insane amount of bike bells all at the same time, you can head up to Bloor for a bike bell parade on Sunday, put on by Bells on Bloor, and sponsored by Curbside Cycle, Take The Tooker, Toronto Cyclists Union and Sweet Pete's. A mass of cyclists will ride from High Park to Queen's Park, starting at noon. Some will be in costume, some will be playing instruments, all will be ringing their bells, in support of adding bike lanes to Bloor Street. This won't be a renegade deal, a bike police escort is on the agenda. Plus, free bike bells!

Did you know there are no synonyms for the word "bell"?