At the same time that fixtures like the Algobay are disappearing, things (mostly fences that hide ongoing projects) have popped up around the Toronto waterfront. One in particular has only been making small blips on our radar recently, but that's sure to change soon.

On a cold winter weekday afternoon, trucks are coming and going, and people wearing orange vests and hardhats (who appear to be tiny next to the massive structure) are working hard to bring the new, highly controversial gas-fired Portlands Energy Centre to service. 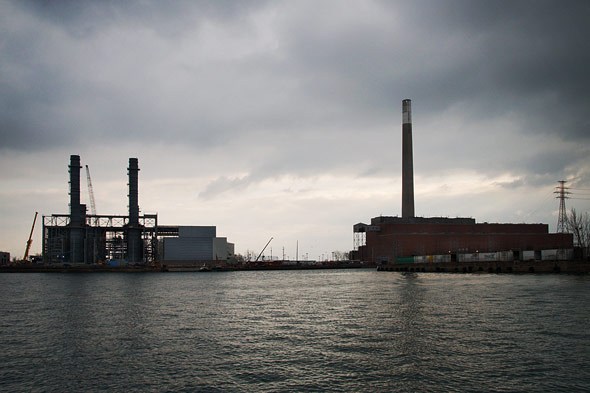 The first, most inefficient stage of energy production is expected to be functional by June 2008 (just in time to contribute its part in the lovely summer smog we enjoy so much), and its full, far more efficient operation (where heat generated by the first stage is harnessed to produce more energy) is slated for spring of 2009.

After many members of the project's Community Liaison Committee walked out in disgust and quit in May of 2007, the unenviable roles of membership in the committee (PDF) should soon be filled (the application deadline lapsed on Friday).

While some, like Jack Gibbons (Chair of Ontario Clean Air Alliance), claim that the new plant will reduce air pollution in Toronto (if anyone can explain how, please enlighten me), others aren't so convinced.

If this is true, why have plant officials refused to allow for independent monitoring of the plant's emissions?

Does putting up a gas-fired plant and eliminating coal-fired plants elsewhere "reduce air pollution" in the same way that passing my vehicle emissions test "contributes to clean air"?